If you're reading this: thanks for the enthusiasm! Airshows are a cornerstone of the YSFlight community, and just the fact that you're interested in hosting them means a lot.

With that said, though, there's much more than meets the eye to hosting airshows in YSFlight. The information that we'll be covering in this thread is knowledge that our community has built up, tried, tested, and proved through more than 15 years of experience. While we've seen a few threads in the aerobatics subforum covering the mechanics of hosting airshows in broad strokes, here, I want to be quite a bit more thorough in explaining the many aspects of what goes into them. After reading, I advise that you take stock of your own skill sets, and put more thought toward whether or not you want to continue with becoming a host in the aerobatics community (I hope you still do!).

As such, I'll be dividing this thread up into sections. The first three will focus on the various requirements that must be met by hosts to ensure they can put on high-quality shows, while the rest (to be added later as I build this thread over time) are more about general guidelines for events. Those remaining future sections will pull from existing threads here and here by Scarecrow and Zack, respectively.

A word of caution that any new YSFlight pilot will receive if they try to dive straight into hosting an airshow (and one that I often give as well) can be paraphrased as the following: "you should perform in other shows first." Quite a lot of the information that we'll be covering here is already known to YS aerobatic regulars, even those who've never hosted their own events, as they're familiar with the various procedures and guidelines that all participants are expected to follow. In other words, you can learn quite a lot of this tutorial first-hand by participating in airshows hosted by existing organizations such as YSAC, YSAA, or YSMAA.

On top of this, participating in airshows hosted by these already-established groups is a great way to gain the trust of the rest of the community, including other performers, by proving that you have the dedication and discipline to make an act of your own. Without this reputation, many performers, especially those with some degree of experience themselves, will avoid working with hosts who haven't built up that solid trust. Think of it like building your job resume: employers are wary of applicants with no previous job experience, but as time goes on, you add more to the list, and gradually gain a track record of reliability.

Take me, for example. I made my debut as a YSFlight airshow performer last year, and after flying in more shows throughout the 2021 season (total: three hosted by YSAC, one by YSAA), I was able to create the YSMAA and launch it by co-hosting RIAT 2021. Had I jumped the gun last year and tried to host an airshow then, without a doubt, no one would have signed up to perform.

Once you've established that you have what it takes to stick to a schedule and put on your own performance, it's time to get familiar with the demands placed specifically on hosts. Depending on how many people you've built connections with already, you may be able to enlist the help of others in the YS aerobatics community to help you host an event, but no matter what, you will still have some major responsibilities. Now, what do those responsibilities include?

-Narration - Throughout any airshow, in YSFlight or in real life, these are the people who you hear commentating on all of the various performances, be it preparing the audience for a certain maneuver, providing information about the aircraft/team itself, or anything along those lines. They typically operate using scripts provided by the performers. Airshow narrators/announcers are expected to demonstrate a good degree of skill in live voiceover work and script-to-performance coordination, and for this reason, only a few individuals currently in our community are able to perform these duties efficiently.
-Music - Accompanying all performances is a music soundtrack, typically a playlist chosen by the performers themselves. Hosts are responsible for operating the music player for all displays (unless the performers themselves opt to do so in another way, i.e. their own music player), and, if applicable, moving it between tracks in accordance with the maneuvers as listed out in the display's script.
-Server Management - Hosting the server on which the airshow takes place, operating the server console to lock and unlock it (to allow performers to spawn in), and making sure that the server is all in order for the entire event. That last category includes (but isn't limited to) arranging different server builds to allow for replay files (more on those later), ensuring all performers' aircraft are installed, and stress-testing it to reduce the possibility of connection problems.
-Modding - Mainly for creating the map on which an airshow takes place. Airshow maps typically require special use of ground objects as well for such items as static displays, attendee stands, buildings, and most importantly, mile markers (buses set to IFF 4) laid out in a cross pattern around the airfield to provide radar-based reference points to performers. It may also be necessary to specially modify aircraft that you, as the host, may want to fly in the event.
-Organization - Miscellaneous duties such as airshow marketing (writing threads/posts on YSFHQ, creating promotional media, etc.), booking performers, collecting and organizing performers' materials such as scripts and music, moderating the hosting hub (i.e. the airshow organization's Discord), and more.

In many cases, all of these duties are handled by one person (see: Indy of YSAC or Alpha Star of YSAA). In YSMAA, we take a different approach with different people performing different tasks: Gordo (or, specific to the annual YSRIAT, Alpha Star) as narrator, Swift as modder, and myself as organizer, server manager, and music operator. For a visual example of that last part in action, here's what it looked like for me during RIAT 2021: 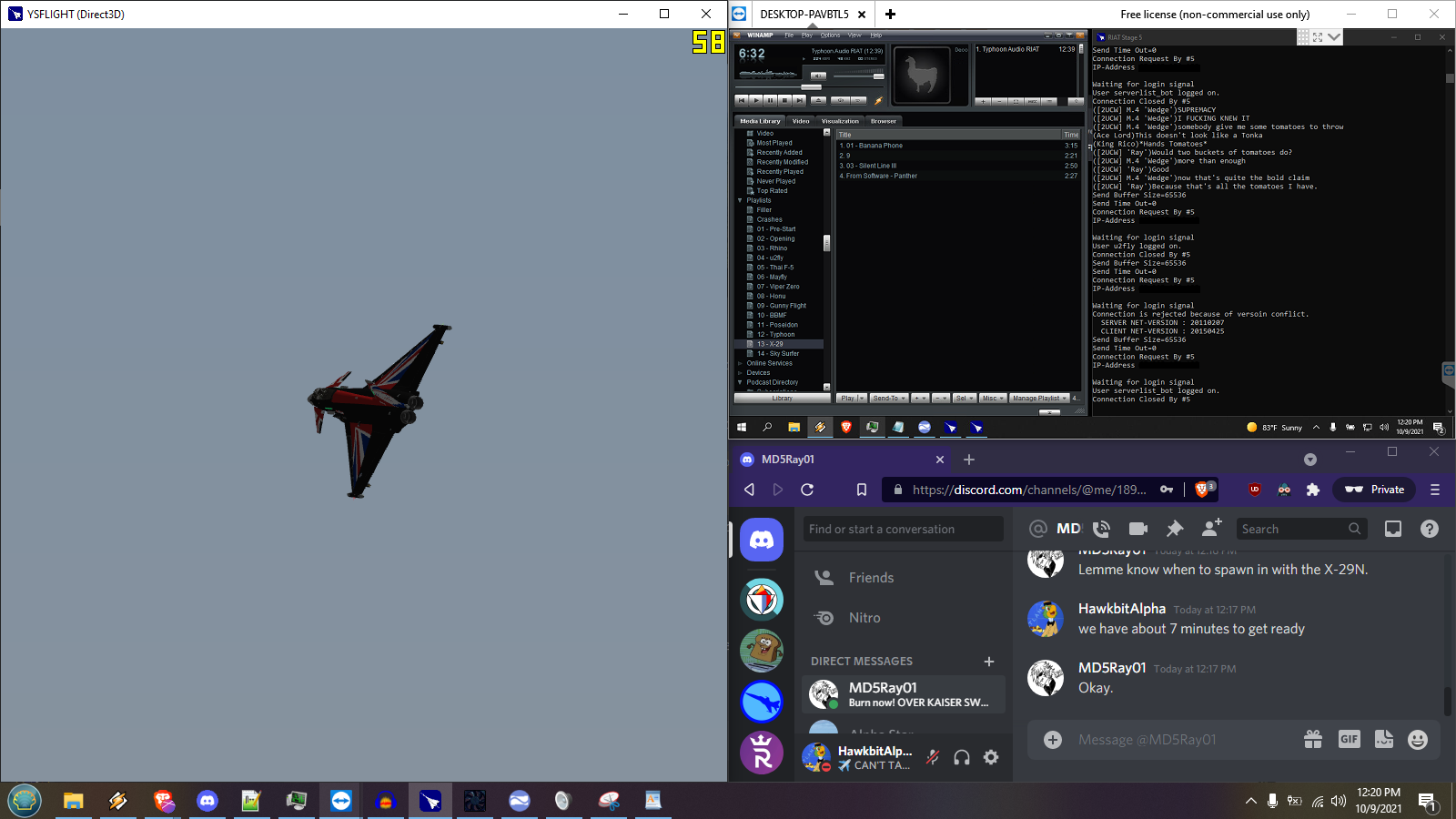 A breakdown of that setup:

-Left side: YS window, keeping an eye on the show itself.
-Top right: TeamViewer, controlling a separate computer on which the server and the music player were hosted (said computer was in another location entirely, hence the need for remote control). On the host laptop, the YS server console is on the right, while the performers' music selections are laid out in a series of playlists in Winamp on the left.
-Bottom right: Discord browser tab, to message performers in order to let them know when they could spawn in and begin flying.
-Bottom right, out of view: a WordPad document containing the next performer's script, in order to operate the music player in sync with Alpha Star.

As you can see, taking on just some of these duties requires a good deal of skill in self-organization and multitasking. Such a job shouldn't be attempted by someone who hasn't yet flown in any YSFlight airshows, as without knowing how they typically flow, something is very likely to go wrong.

This part's gonna be a bit more technical than the others, as we'll be covering what kind of setup you need to be able to efficiently host a YS airshow. Let's start with the hardware end of it:

-Computer - It's strongly recommended to have either a decently powerful computer with two monitors, or two separate computers. As you could see in my RIAT 2021 screenshot above, since I had only one screen to work with, and a second computer in a completely different location that could only be operated by remote control, things got very crammed for space on my screen. The more efficient the distribution of on-screen data and computer workload, the better.
-Internet - This is the internet connection that currently powers the 2UCW server, which pulls double duty as the hosting server for YSMAA airshows. To sustain a YSFlight server with a sufficient number of pilots/spectators and aircraft takes a fairly good connection; I would go out on a limb and say at least 1MB/s (megabytes, not megabits as Speedtest.net reads) in both directions is a good threshold.

-Discord - Long gone are the days of YSFHQ hosting airshows from Teamspeak 3, and today, we live in the era of Discord. Airshow hosts today create their own Discord servers to act as hubs for performer organization, public communication, sharing of promotional media, and of course, the streaming location for all of the event audio.
-Discord Audio Pipe - A program that allows you to stream your computer's audio to a Discord bot, allowing for stereo output that would otherwise not be possible with a standard user input. For a tutorial on how to use this one, see this thread.
-Music Player - Any music player application with sufficient hotkey-based controls and playlist building options will do the job. My personal choice for this task, as seen in the screenshot above, is Winamp 5.8, an older program that nonetheless has great support for global hotkeys and playlist creation.
-Text Viewer - Whether you're filling the role of the narrator, the music operator, or both, you'll need to be able to access the scripts that many performers send in for your use. If you don't already have Microsoft Office or an equivalent program on hand, I recommend getting LibreOffice for the purpose.