It's time to embrace an evolution.
When Gordo and I first began the YS Military Airshows Association back in July, we had a clear vision in mind for what we wanted to do: host military-focused YSFHQ airshows which put a special focus on both YS squadrons and real-life military aviation. Our first idea was to host an annual show at 2UCW's current home base of NAS Madobe, and continue to plan more at "off-times" throughout the year. Circumstances have instead played out in a very different manner, and with the suspension of the military-displays-only rule, we have instead become one of HQ's leading general aerobatics organizations.

Since the beginning, we have operated not only as an airshow hosting platform, but also as an "aerobatic squadron", sponsoring in-house acts which fly at both our own and other shows on YSFHQ. Going forward, we intend to also become the primary hub for all aerobatic teams and pilots in YSFlight, and seek out new performers with the use of the newly-launched Zydeco Academy. What this means is that, if you wish to have a dedicated platform to promote your act on this server, you can now request to have your own channel added to the list.

Now, for the biggest change of all: Effective today, April 9, 2022, the YS Military Airshows Association is no more. The name and brand no longer reflect our goals, so what does?

In the tradition of one of the most important groups in YS aerobatics history, we are now reorganizing as a "new" YSFHQ enterprise: VCAP Aerobatics - shorthand for the Virtual Collective of Aerial Performers. This also means that we are no longer an official partner of the 2nd United Combat Wing, although the squadron's displays will continue to be a staple of our shows. With this change, we intend to start introducing more live multi-ship acts (including the likely reboot of the now-independent Windigos Jet Team), and continue experimenting with the formula of YS airshows into the future. We hope that all of you will continue to support us on this new path.


Here's to a future of YSFHQ entertainment to come! ~~HawkbitAlpha, VCAP Manager & Co-Founder 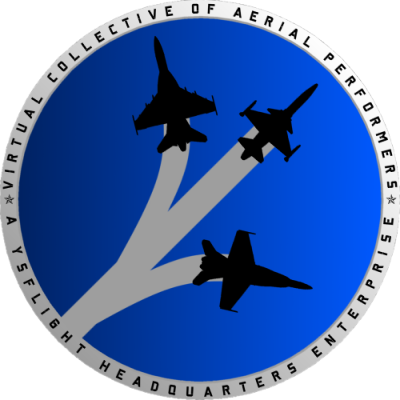