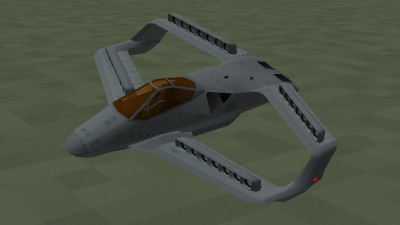 DESIGN / BACKSTORY:
The Mudskipper EDFX (Electric Ducted Fan eXperimental) is an attempt to incorporate a number of recent aeronautical trends and desired handling characteristics into a single design. This has been mostly inspired by (copied from?) the work of Tom Alfaro, and his plane the ROMBAT: https://www.google.com.au/search?as_st= ... 0yskDSVpWQ

A hybrid powerplant of two small internal jet engines drives generators to power 28 electric fans (7 per wing) which blow across four independent control surfaces. These allow for extreme manoeuvrability down to a very slow (~20 knot ~37kmh) stall speed. The clean, tight handing (and easy piloting) is achieved through a semi-autonomous flight control system.

Originally conceived as a race / recreation plane, the tough foam-metal 3D-printed airframe was created with military applications in mind, with room for internal stores, toughened landing gear and armoured cockpit. The Mudskipper is fitted with a 30mm cannon and four hardpoints, carrying up to 76 rockets. Four ventral 6x6 dispensers carry up to 144 flares. The faceted hull is designed to deflect enemy gunfire - this plus the multiple redundancy of engines gives it a strength (survivability) of 32.

The Mudskipper is outstanding in close support, counter insurgency and AA suppression roles.

INSTALL:
Just copy the aircraft and user folders to your YSFLIGHT folder. This plane comes with custom flares and weaponry including tracer bullets / muzzle flash.
A target indicator appears when an object is within range of the gun.
Use the velocity indicator to aim the rockets from anything up to 10 miles away.

CREDITS:
I have borrowed some components from other creators:
The pilot head and flare dispenser from the amazing Hornet Pack (originally Umaibow / Grepyon?) (viewtopic.php?f=168&t=8318)
The AGM114 and bomb are from the TF58 weapons pack.
Some hardpoints components came from the GGWP Weapon Pack (http://mrsandj.sakura.ne.jp/ht/ckp/)
The basis for the gun range indicator came from the VFX / Macross Pack - not sure about the author.

Most of these have been heavily modified or at least re-painted. If you see anything I've missed and would like credit (or would like the object withdrawn) let me know, otherwise remember that plagiarism is the sincerest form of flattery.
Thanks to all modders who put their creations out there for the rest of us to be inspired by.

Any comments or feedback would be appreciated. Anyone? Anyone? Bueller?
Top

Oh hey! This is actually quite a nice little design. Looking through the DNM i'm very impressed. Everything is clean and tidy. The model looks rather detailed for its small size. I haven't popped it into YS yet but i'll edit the post when I take it for a spin.

Ill test it out

UPDATE: This is the upgraded (and I hope finally finished) Mudskipper EDFX. Latest improvements are a new hull design, internal rotary rocket launchers and enclosed landing gear. With the DAT file and flight characteristics, I've tried to create a plane that can make low, slow attack runs (ideal for going against warships) and that will turn nicely: I've set it up to lose speed during sharp turns to avoid G-overloading (this hinges around the REFTHRLD number at the bottom of the DAT: the bigger the number, the more speed lost in a turn.) Note also the pilot's head movements during a dogfight. I've put a few annotations into the DAT file that might help.

Is it really the ultimate ground attack plane? To each their own tastes, I guess. As always I'd be keen to know what you thought of it - be as blunt and brutal as you like! Having tinkered so long and hard on this plane (in the more out-there inventive fictional realm) any kind of feedback would be appreciated.
Top
Post Reply
5 posts • Page 1 of 1