Here is my latest creation to roll out of the hangers of Dragonic Machine Industries. 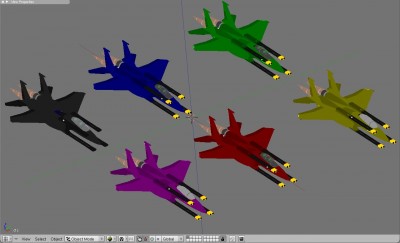 Introducing the XF-15ES Sniper Eagle in six different colors.
I have use the F-15E Strike Eagle's frame and i have removed all weapon hard-points. the hard points that remain have been shorten to draw the external drop tanks up close to the underside of the wings.
I have added eight large cannons to the frame and i've made sphere skins for the bullets.
The cannons have 10000 rounds of ammo to chew through and the fuel amounts are as close to a real F-15E as i can get without talking to a real F-15E pilot. which means players can linger in an area for a really long time.

by Dragon_Mech
in the next few days i will be releasing a dat file update for these planes that will fix an issue with the gun power.
i will be increasing the power of the guns from 1 to 2.

by Dragon_Mech
Hello everyone.
here is the dat file update for the Sniper Eagles. that i promised. and as always, i have updated the pack in the original post.

and just a heads up about the download in the original post. i had to use the 7Zip format to compress the file. i hope that this doesn't cause problems for anyone.
All times are UTC
Page 1 of 1