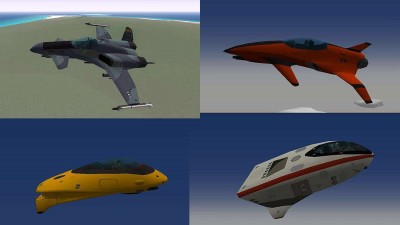 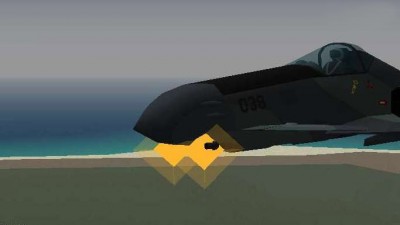 The MAG-8 is a lightweight high-manoeuvrability fighter / attacker built around thrust-vectoring engines and two 70mm cannons.

Project 88 is pure fantasy, a cheat plane, as is the Spectre.

The Shadow has some unique flying characteristics & capabilities:
TAKEOFF / HOVER MODE = spoiler + afterburn + thrust vector down
DOGFIGHT MODE = spoiler + afterburn + thrust vector level
Hover mode can be used as a stationary ground attack platform. Spoiler and no throttle allow it to drift down to a vertical landing. Without spoiler they glide perfectly at speeds down to 30kt.

As they are essentially weightless no other weapons can be carried. Also, they can do up to MACH 8, and beyond...

(P.S: Have updated attachment to include the Grigor\Weapons folder, which includes the tracer.srf file required for tracer bullet effects. This can be added to ANY PLANE using the keyword WPNSHAPE GUN FLYING user\Grigor\Weapons\tracer.srf )

by MD5Ray01
I'm looking forward to flying these.

by Vic Viper
What? How?! Welcome back Grigor!

Staying for a while or just delivering us this awesome present?

by Grigor
Hi all,

Yeah, if previous years are anything to go by, I'll maybe once a year dust off the old YS folders and tinker with new designs & ideas. These are the best of the best of last year's. Seems a waste doing all that work and not putting it out there!

by Huckebein the Raven
Flew the Spectre, decided to hit the gas and point the nose straight up. Reached nearly 600,000 ft of altitude, managed to get back below escape velocity again, returned to earth, and landed back at base.

10/10, would journey the final frontier again

(Seriously though, these are really cool, good job!)

by Grigor
Apologies to all.... I advertised muzzle flash and high-vis tracer bullets without including the necessary User/Grigor/Weapons folder. This has been remedied in the new Grigor's Planes 2016-1 zip folder.

These gun effects use the WPNSHAPE GUN FLYING keyword.
All times are UTC
Page 1 of 1