Damn you Dragon029 my whole evening was just gone because of KSP!

I shall pre-order with my next paycheck. These guys deserve some serious lovin'.
Top

I've made 3 or 4 orbiters/lifters capable of lifting cargo of up to 3.2... on one of my first test runs I ran out of fuel right after I made stable orbit, so my kerbals were stuck up in space forever, and another time I wasn't paying attention to the trajectory on the map, and I ended up floating away into deep space. I sped it up and walked away. When I came back, it'd been 3000 days and the kerbals still looked fine. I don't know how they do it.

also, I made a plane that fires rockets and is actually quite maneuverable, once you get the hang of it (the joystick helps too)

I have officially landed on Mun and returned safely to Kerbin.

I hear in the next few iterations they'll be implementing space stations and the ability to assemble ships in orbit with parts you bring up from Kerbin (which means you can have larger rockets without worrying about getting them out of Kerbin's atmosphere). Hopefully there will be some kind of server option so we can all get a space station working and assemble rockets.

I volunteer to be on the first expedition on board YSFHQSS1. Dragon029, Taskforce58 and I will be overseeing station construction and mission scheduling.

For those wondering how to get to Mun, this is how I did it:

Launch your rocket and get in a stable orbit heading east (90°). Loop around Kerbin until Mun is just over the horizon and fire your rockets (assuming you're using liquid-fueled rockets). Try to put your apoapsis about 20° ahead of Mun (it orbits relatively quickly) and out just past it so you have sufficient velocity to get there. Shut down your engines: you'll need the fuel to decelerate. Once you're captured by Mun's gravity, begin decelerating and--if the program hasn't already done it--reset your systems to target Mun instead of Kerbin. Fire your rockets and descend slowly: remember that you can't use parachutes to slow your descent. Touch down at around 2m/s so as not to break anything. From there, launch again and orbit back around Mun until you see Kerbin again. Mun's gravity is going to drag you as you leave, so remember to adjust your aim accordingly. The transit home should be relatively straightforward--just keep some fuel in reserve for minor adjustments.

So, what are the recommended addons? Doesn't look like I should have too many installed as it takes about 5-6 seconds to load one part (judging from the alt-F2 debug screen during loading).

C7, Intrepid, KW Challenger, Saturn V, N1. That should do it. Then mess around.

Have been playing around with Mun-rocket designs. This one has been the most successful. I totally screwed up my return trajectory from Mun (and I was on high-warp speed so I reacted too slowly to correct it) which is why the mission time was so long. I also accidentally hit the spacebar while returning to Kerbin so, instead of splashing down right off the Space Center's beach like I had intended, I hit the dirt a few hundred kilometers short of my objective. 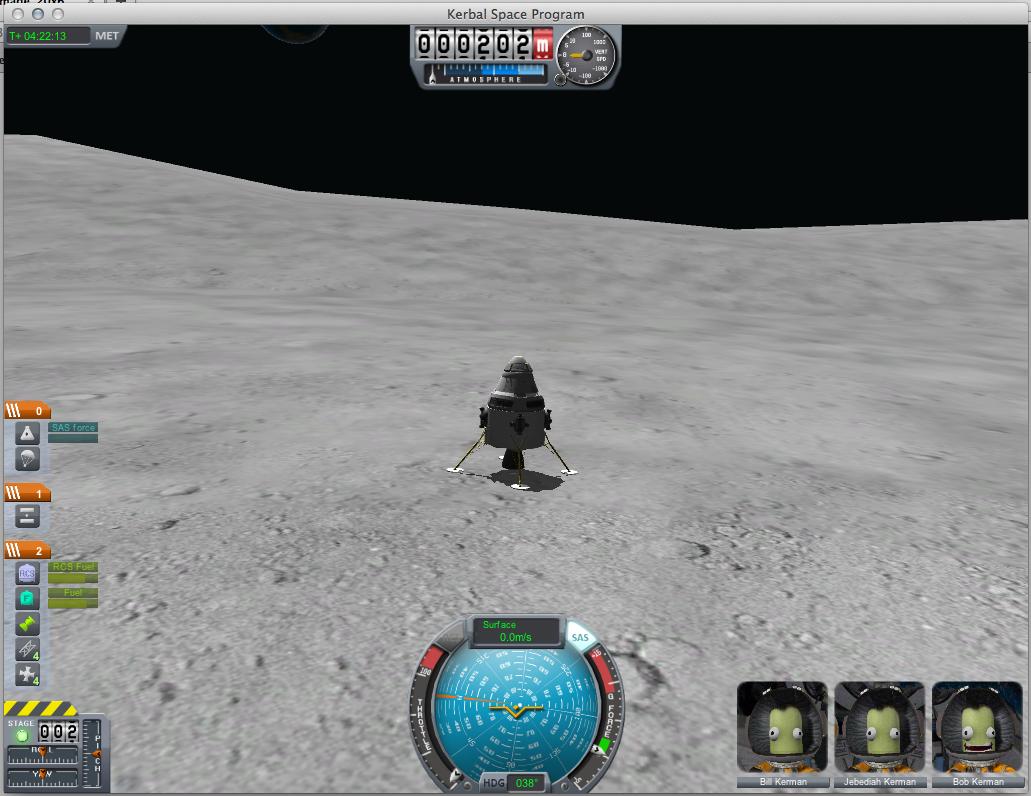 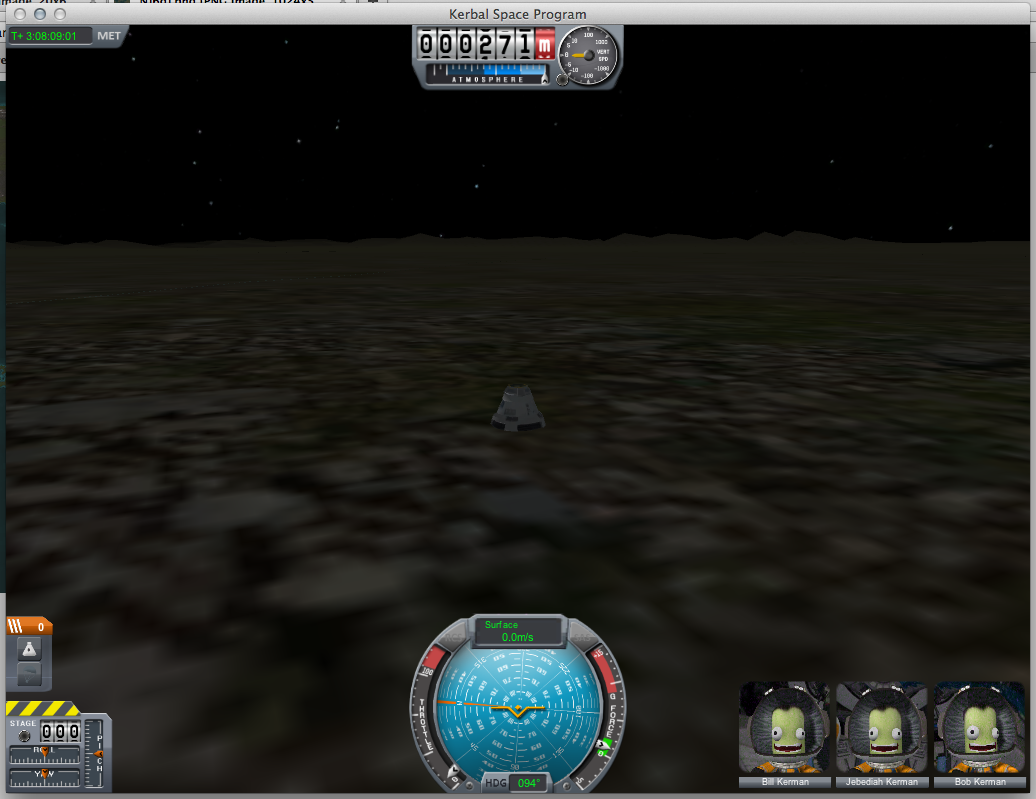 I dun gon built me a moon shuttle!

In orbit around the moon.

Performance wise, it's a little difficult to control going up - you need ASAS on all the way because of the uneven positioning of the fuselage and rockets.
However, once you've got the shuttle itself flying around, it's quite powerful, controllable and agile. Landing it VTOL style is really quite easy too.
Per Ardua Ad Astra
>>> Dragon Addon Pack <<<
(PAK-FA, F/A-52, F/A-36, MQ-21)
Top

Nice. I got mine to Mun but I haven't been able to carry enough fuel/be efficient enough to return.
Top

Yeah, my first iteration of this ran out of fuel trying to return - I was headed back, but was off-course and with nothing but RCS fuel to get me home; that ended up running out after like 30 seconds, leaving me stranded.

The 2 ways I fixed it:
1. added 2 small extra boosters to the 1st stage, allowing it to get into space without using that liquid engine in the middle (the liquid engine is then used to get me halfway to the Mun).
2. Adding those 2 small fuel tanks with thrusters on the wings of the shuttle - the less time you spend in a gravitational field, the less energy it's going to sap from you - adding those 2 extra thrusters uses fuel quicker, but it's more fuel efficient; especially when the middle thruster runs out of fuel around the Mun.
Per Ardua Ad Astra
>>> Dragon Addon Pack <<<
(PAK-FA, F/A-52, F/A-36, MQ-21)
Top

My mouse died and I'm not gonna do this with a touchpad. I don't have work tomorrow, so I'll see if I can do an Armageddon-style mission. Pics will be posted.

Also, I'm gonna start uploading my successful rockets to give people somewhere to start. The big issue is that I forget to save them in the first place.
Top

I reeeeaaaaally need to try this.
Top

How do you make strape-on boosters like the Delta II, where the boosters hug the rocket's main body? I don't like the stock radial decoupler which leaves a gap between the booster and the rocket.

I just figured out how to make the main engine and boosters fire at the same time. Woot!

Just put on symmetry (top left corner... left click increases angles of symmetry, right click decreases...) and then drag them so they are beside the rocket like you do with wings. You can't do it with fuel tanks: only boosters and wings. Only issue is that you can't detach them. There is, however, a radial decoupler out there that has a really low profile and looks like a real attachment. Dunno what pack it's in. Lemme go look.
Top

That radial decoupler is in the Sikisko pack.

It's pretty good, but as a note - feel free to use plenty of strut connectors - they're in the structure & aerodynamic parts tab, right near the very end - basically you just click on one part, click on another and bam, you've got a solid beam to hold stuff together. The only issue you might meet with using them though is that they'll connect to things that in between the 2 parts you're trying to connect. Their collision detection (when placing them) is a little wide too, so you can't use struts on parallel or nearly parallel surfaces.
Per Ardua Ad Astra
>>> Dragon Addon Pack <<<
(PAK-FA, F/A-52, F/A-36, MQ-21)
Top

Dragon029 wrote:Their collision detection (when placing them) is a little wide too, so you can't use struts on parallel or nearly parallel surfaces.

My experience has been that you just have to fiddle with them.
Top

I MADE ROCKET PLANE WITH STOCK PARTS! IT FLEW FOR ALMOST TWO MINUTES! EVEN BOB LIKES IT!

Yes I know about the C7 pack. Gonna try that next.

BTW Where is the N1 rocket? Couldn't find it in the KSP forums. 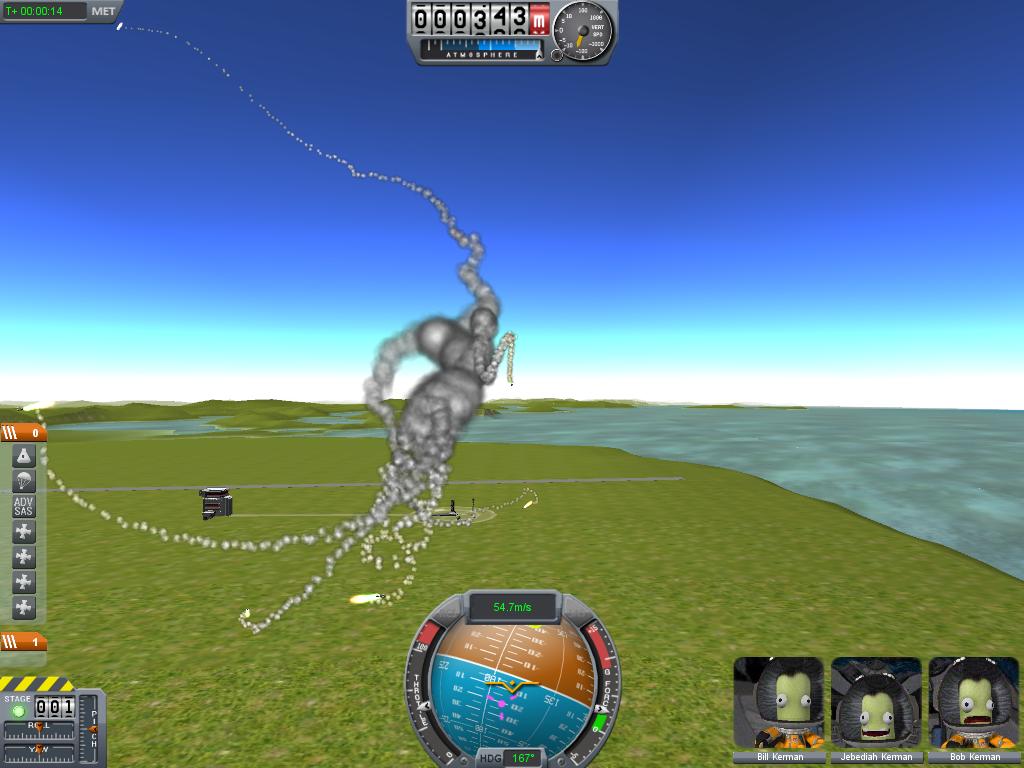 This brought me so, so much joy.
Edit: made it to orbit just now, and that'll have to be enough for now. I'm having about twice as much fun blowing these up into mountainsides as I am just from flying them.
Top

Also when your rocket gets to about 50 stages the lag is pretty terrible.
Top
Post Reply
90 posts