So folks, I thought I might as well create a thread for this, considering that things are starting to really happen with it.

I'm currently the project manager (guy who manages the technical teams) for a university team who are developing and building an Unmanned Aerial Vehicle for the 2014 Outback Rescue UAV Search and Rescue Challenge.

Here's a documentary (~40 minutes long) about last year's attempt at the challenge.

As part of this challenge, we'll be required to design, built, test and fly a UAV which can fly ~7km to a search area, and then autonomously search that area (which is 2x2 nautical miles) for a dummy wearing a high-visibility work short ("Outback Joe" - seen in image above). We must then provide accurate GPS coordinates for his location and, if they are correct, drop a 500mL water bottle to him.
The idea is that we are locating a farmer stranded on his property (in Australia, a farm / property may stretch for dozens, even hundreds of km) and we are tasked with locating him and giving him water, which isn't necessarily easy to come by in the Australian outback.

My team seeks to accomplish this task with a fixed-wing UAV, based off the Mugin airframe, which has a 3m wingspan and can apparently do ~1.5 hours for 3L of fuel (we must be able to fly for at least 60 minutes). We will be powering it with a 5.7HP 2-stroke, 2-cylinder petrol engine (for model aircraft) which should let it cruise between 120 and 150kph.

For electronics, we will be using 2 ArduPilot Mega 2.6 autopilots, which will fly the aircraft and provide most of our telemetry. They will operate parallel to one another and both report back to a Pandaboard, which is a mini-computer which is powered by a 1.2GHz dual-core ARM processor. This Pandaboard will gather the information from the ArduPilots, as well as footage from a gyro-stabilised GoPro Hero 3 (used for it's sensor and out-of-the-box wide range of settings). With the footage, it will perform image analysis, looking for potential targets. It will then gather up the footage (including close-ups of what it thinks could be a person) as well as telemetry data, and broadcast it back via a 900MHz, 1W radio (telemetry only) as well as a 5.8GHz, 500mW radio.

As of early November 2013, we have received all of our electronics (with some very minor exceptions) as well as our first airframe.

Our airframe; 80% constructed (just missing the landing gear and engine):

This is what it'll look like when assembled (although engine is missing in this photo too) - this image was send to us by the designer of the airframe; we're the first customer to receive the new version of this airframe, now with a more aerodynamic tail: 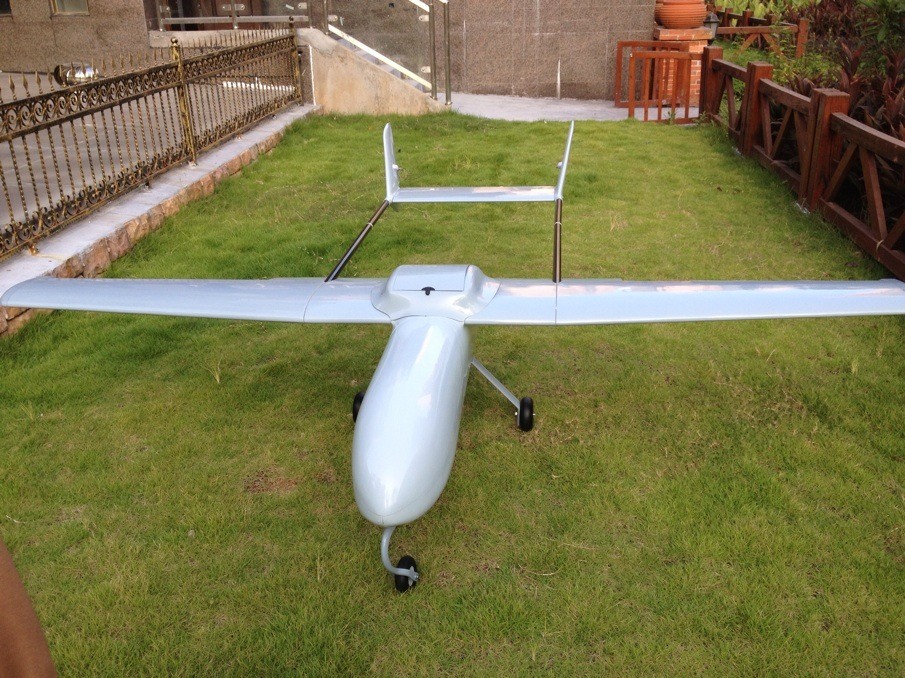 We have managed to perform basic communication between our modems.

For the 5.8GHz link, we were able to provide internet access from one computer to a laptop, with the base computer using it's 5.8GHz modem as a bridge connection. Range tests have yet to be completed, but using 900MHz receiving antennas (which are only slightly better than nothing), and our broadcasting sector antenna, we were able to stream it downstairs through a brick & concrete building. We expect very good LOS range.

For the 900MHz link, which transmits serial data, we had to utilise an Arduino Mega 2560 (EtherMega variant) to interpret the data. With only omni antennas, we were able to achieve the same standard as achieved with the 5.8GHz link (the 900MHz link runs with double the output power).

An image of our 900MHz link setup - there's the 1W 900MHz transmitter on top, with the Arduino on bottom. we have 6 wires coming out of the transmitter, but only 4 are used (we pulled the connector & wires out of a box that was going to a rubbish bin). There's also a 5th, separate wire used to connect 2 pins on the Arduino. 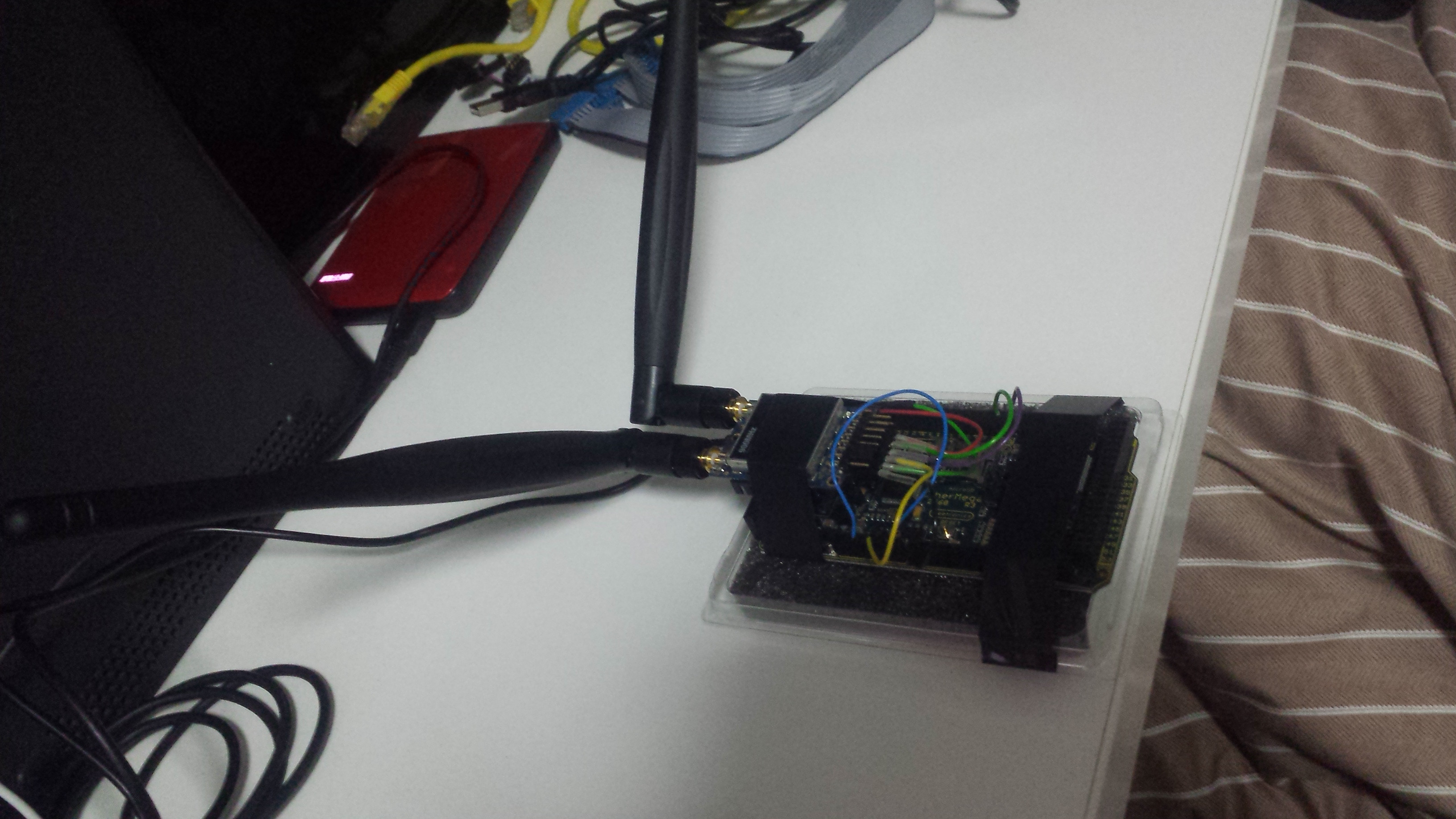 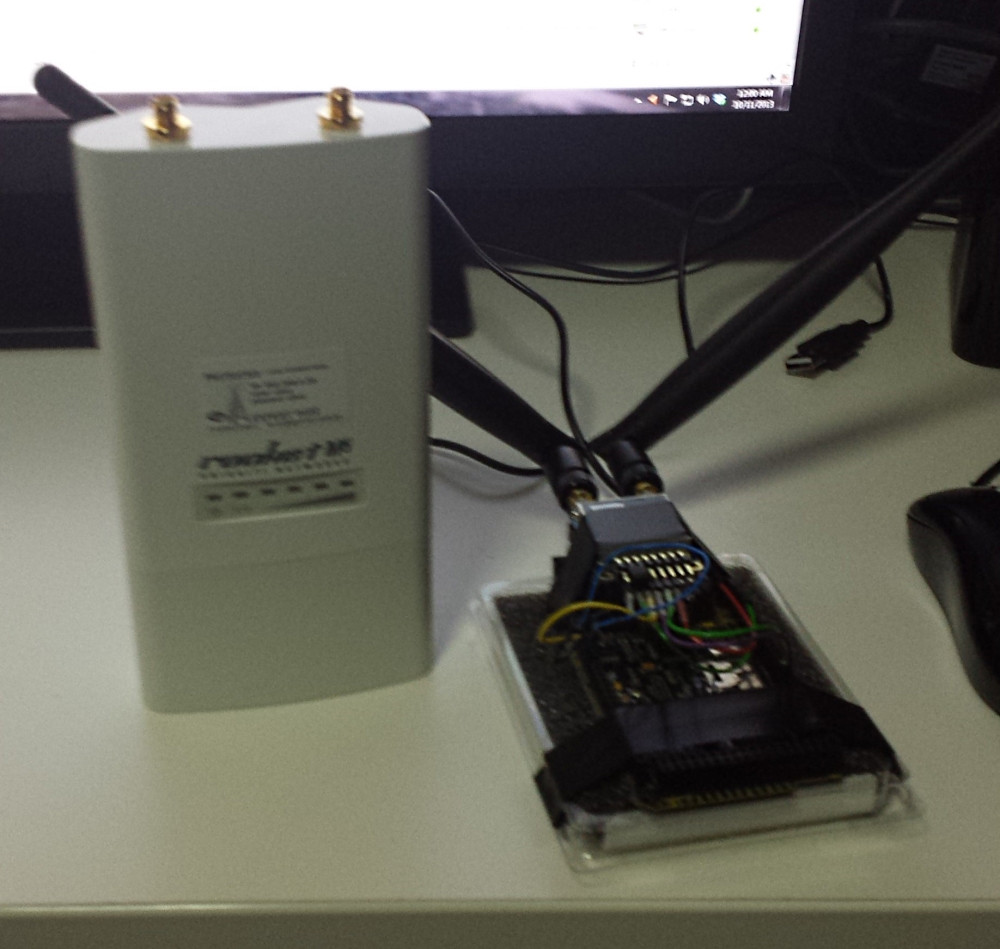 - Test different servos to see what is sufficient for our airframe.
- Get the Pandaboard configured and working.
- Find alternative supplier for the 5.8GHz omni antennas we tried to order.
- Design tray for the electronics to sit in, within the airframe.
Per Ardua Ad Astra
>>> Dragon Addon Pack <<<
(PAK-FA, F/A-52, F/A-36, MQ-21)
Top

The design looks clean and aerodynamic as it could be. Best of luck to your team in winning the challenge.

Very cool. I'll be following this closely as we're building a UAV of our own at my university (albeit a much smaller/cheaper version).
I make this website.
Top

It's good to be an Australian Officer.

#benefits #2tech4me
I am an accountant working full-time (and some). I'm not here as often as I would like to be. Send a message if you need me. There are a few people in the community who can get in contact with me urgently if you need - don't be afraid to ask. I just don't check here as frequently as I used to. Sorry!
Top

This week, we've done a decent bit of work; we got the engine attached (that required us to get holes drilled into the fuselage backplate), as well as a servo line attached to the throttle. Spent a bit of time getting the test 1.5L fuel tank sealed with all the hoses, filters, etc installed. Our 3L tanks (which will be used for operational flying) have also arrived from Perth. 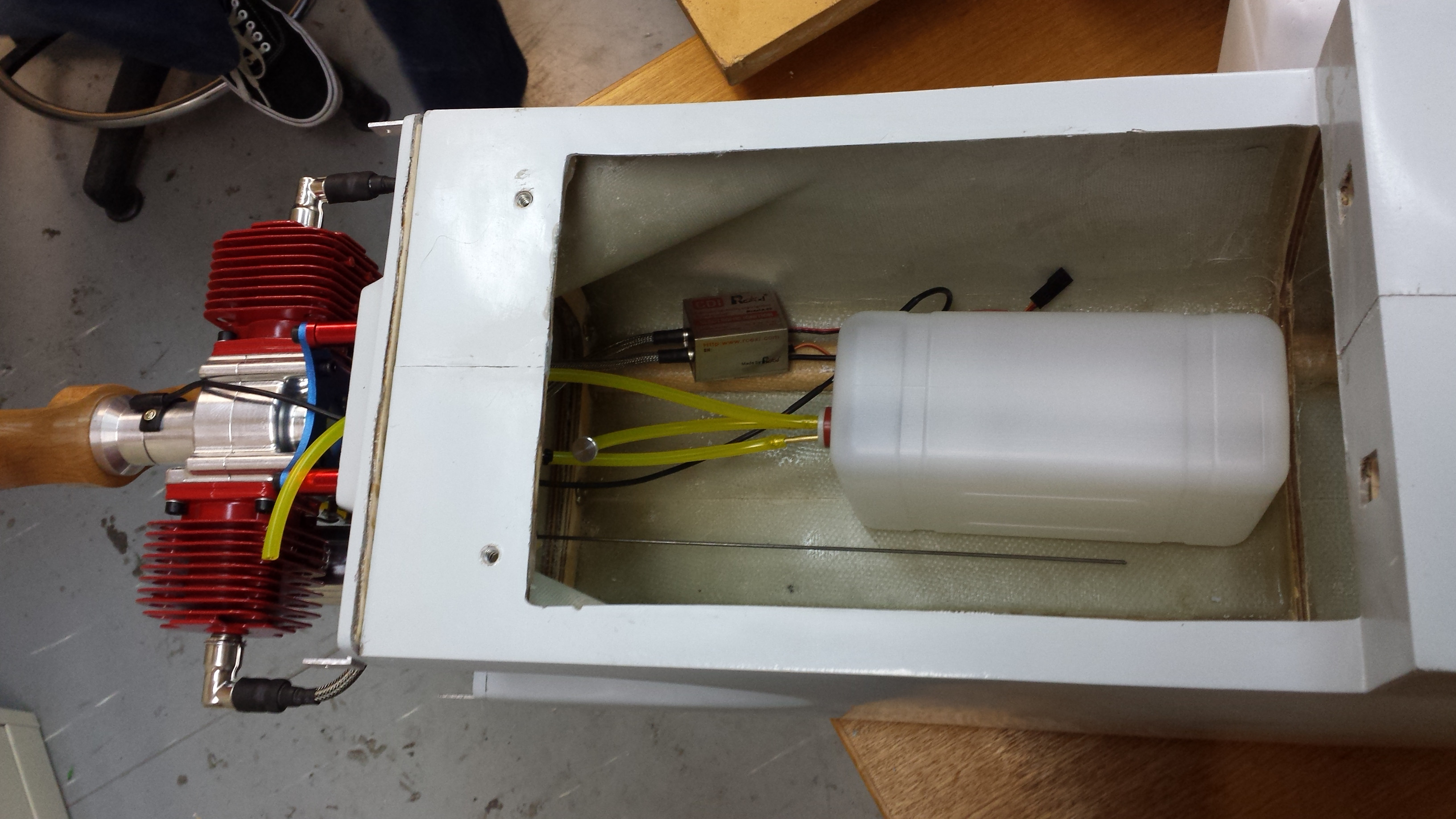 We also attached the landing gear, which certainly makes it instantly feel bigger. We've bought some 15kg/cm (very high torque) servos to control the nose gear and ailerons. The other surfaces don't need servos that powerful. 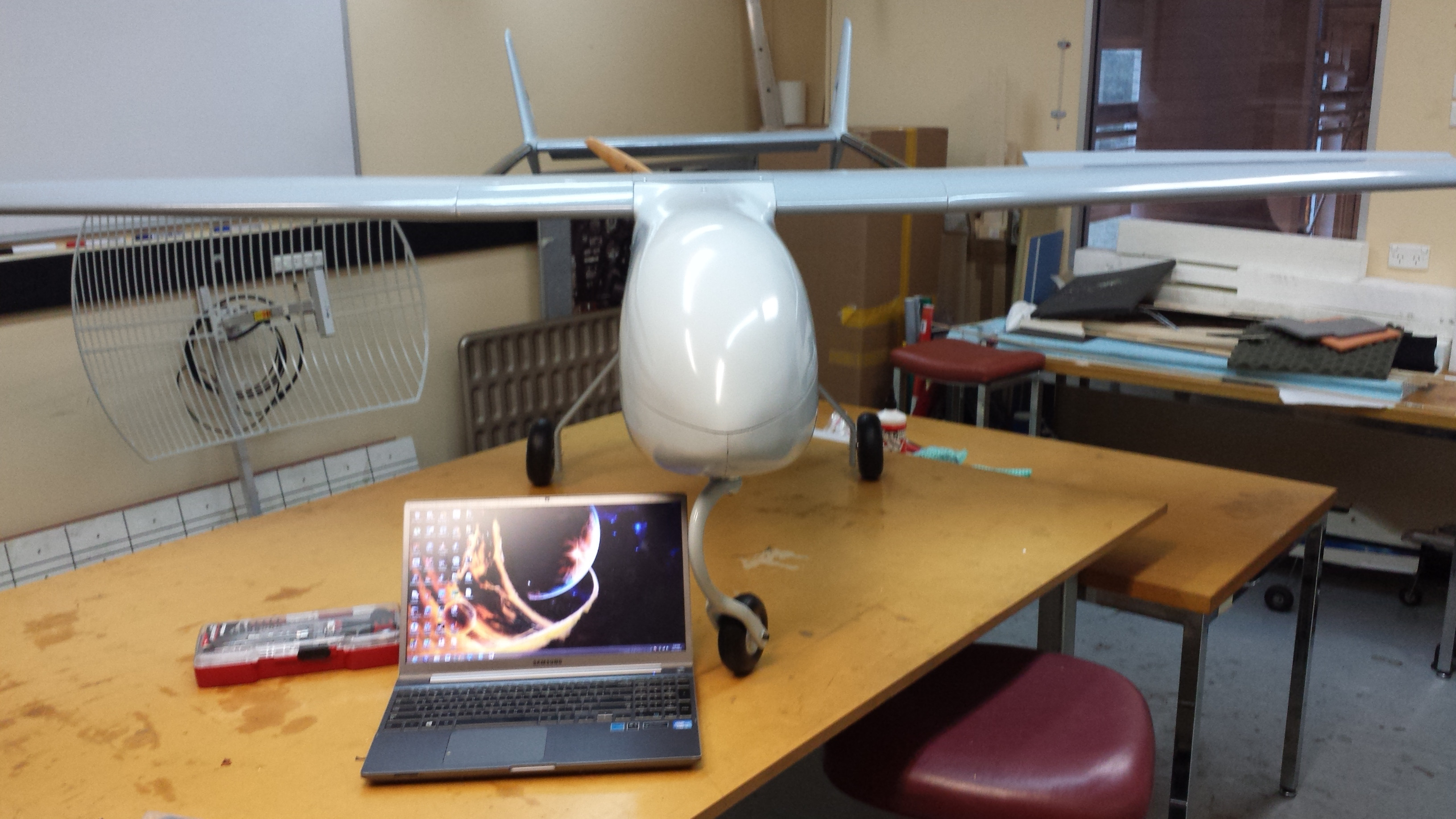 Today we also performed some tests with our 900MHz systems, testing things like their vulnerability to obstructions, height requirements, etc from about 500m away, using our parabolic grill dish antenna at one end and the 2x omni antennas on the other. The radio with the omni antennas was transmitting, the radio with the dish was receiving. We found that when less than half a metre off the ground (at 500m) we couldn't receive signals (too much absorption straight into the ground), but that there was only about a 10-20% loss in signal when it was behind a ~5m hill. Note too that the 900MHz antenna was only about 1m off the ground, whereas we intend to use it operationally about 5m off the ground.

Tomorrow we intend on going for a drive and performing a range test between 2 mountains, which will be the same distance as between the airport and middle of the search area in the competition (5.5km). Unfortunately we may not be able to operate at max power (sitting still, the radios overheat), but that should offset (to some degree) the fact that the line between each mountain won't be filled with trees and hills.

Oh and we assembled the gimbal for the camera system. 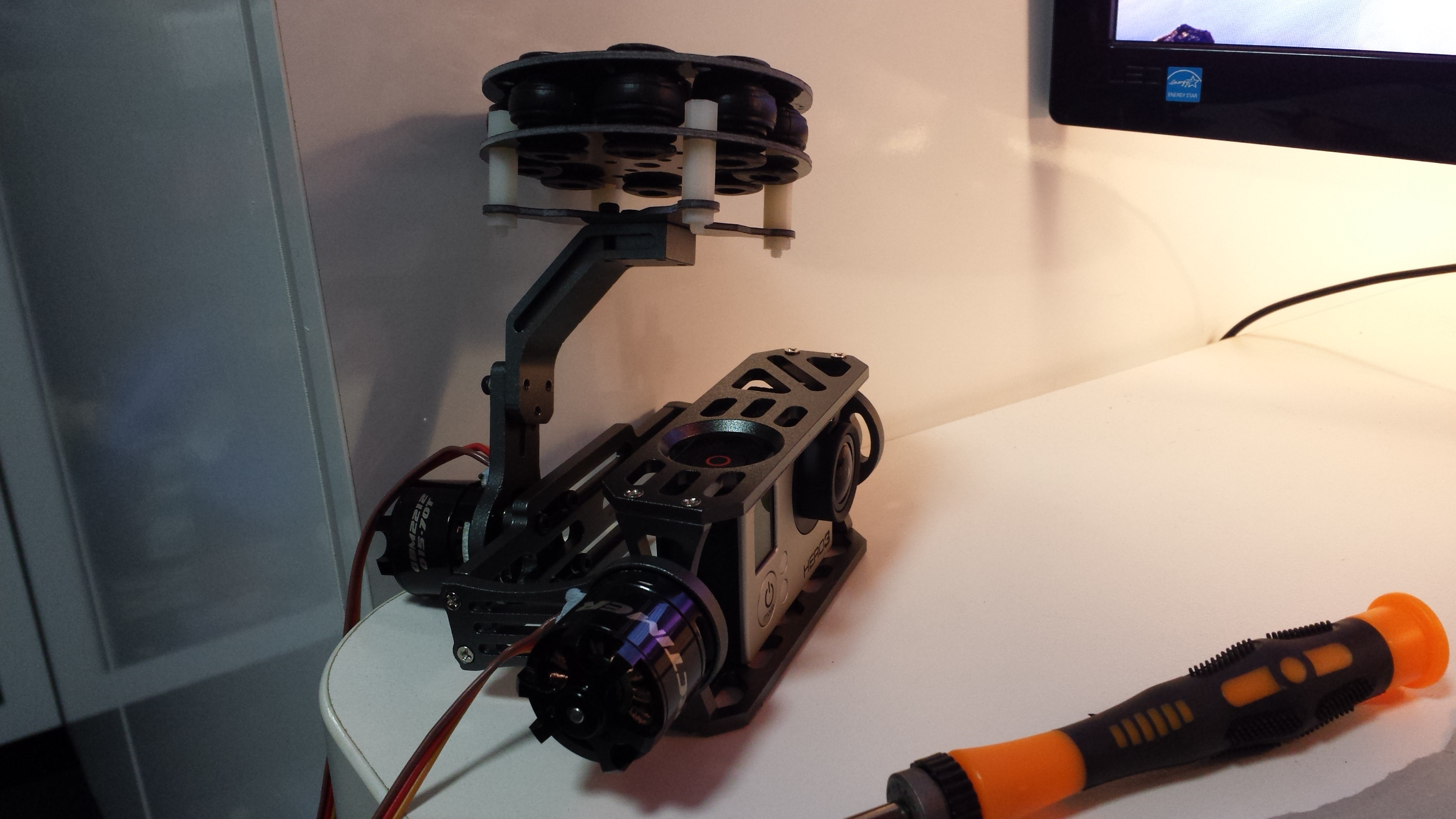 Its a great proyect an a great experience for you, enjoy it! keep uploading more pics! Today's range test was inconclusive - we were unable to transmit / receive signals between the 2 mountains, but we're not too concerned about it, because both mountains had mobile phone, etc communications towers on them, which would have drowned out the signal from the 500mW transmitter.

Here's a picture of what it looks like standing on one mountain, looking at the other - see that big tower to the right on that hill?

Also, as mentioned there, we were operating at 500mW transmitting power and at a medium data rate, rather than the maximum 1W setting.

As it is, we did manage to send some data when we had line of sight at about 2.5km away. In both scenarios as well, the antennas were relatively low to the ground; the big dish was about 1.5m - 2m off the ground and the omni antennas on the other transmitter were about 1m - 1.5m off the ground.

We're currently also working on building an electronics tray where our computers, etc will be mounted. This is only in the planning stages though, as we need to be careful with wire management.

Users browsing this forum: No registered users and 45 guests