by Turbofan
And I just did!

You can thank the release of the cold polar air for that.

Nice toasty 50F here. I'm so not rubbing it in.

by Gunny
No great accumulations but the arctic express is rolling here.10 deg F vary cold for down here in WV.

Gunny wrote:No great accumulations but the arctic express is rolling here.10 deg F vary cold for down here in WV.

Yeah single digits yesterday and what a pain. Wind blew over a trash can and I almost lost my hands with the 10 second exposure to that cold air. Today we had -11 in the morning and my car wanted to blow itself up. Lol probably took like 15 mins for it to heat up with spirited driving

by Neocon
The day started in northwest Tennessee with sleet and freezing rain that left a solid sheet of ice on every vehicle in the area. The temperatures were in the high 20°s and the roads were wet but not iced over. That did not, however, prevent at least one minivan from sliding into the median on the highway. The temperature has increased to above freezing now, and the precipitation has stopped.

by ksh
Here in Buenos Aires Argentina we are having a lovely weather! with the temperature at 31 °C and the real feel at 34°. Humidity is up to 39% and the sky is clear! Perfect flying weather!

by Monoceros
Houston apparently has forgotten what WINTER is. Some days it's so cold it feels like it's freezing even though it is only about 45F with a Northern gust. And some days it gets foggy because the relative humidity is above 100% and it is cool outside at about 54F like today. Though no fog is anticipated for tonight/this morning, it is rather mild. Rain was expected Friday then was pushed forward to Saturday with rain anticipated late in the evening into Sunday morning but did not happen. But it was humid but not enough to cause any actual rain. This morning is going to be mild again with the temperature not dropping below 61F and picking back up to the upper 70s and then dropping again into the lower 40s just to kick everyone in the face.

The weather has been so unpredictable and erratic that people have been getting sick repeatedly due to either allergens blowing from the North (pollen, grass, mold etc...) or rapid seasonal changes (cold, warm, hot, freezing then hot again...). Luckily, I have been able to stave off allergies myself but there are time where I can feel it trying to drag me down and then feel better once I nap or get rid of the groggy feeling by sweating, napping, and then cooling off if it is hot.

FYI: All temperatures mentioned are in Celsius!

by Turbofan
A balmy 69F today, the high on Thuursday is expected to be near 80F. I'm sure high temps in many places will be breaking records this week, especially in the Southern Plains. Then next week it's back to near seasonal averages. You can thank El Nino for the warm weather.

Don't worry you easterners, the warm weather should be spreading east (although not quite that warm).

by ProPilot275
-8 degree Celsius in Sweden brrr... brrr... but it's a beautiful day today. Sun is shining with snow merge with Sweden nature create a beautiful image!

by Turbofan
Currently at 74F, dewpoint is 57F and feels a lot like a humid Spring day than Feb 20th. The question "do I mind?" is like asking me if I like pizza. Going to be near 80 degrees later today. I think a nice walk outdoors will do just fine.

Tomorrow the temp will go back down to 68F with a brisk north wind, but still, doing great by winter standards. It can get pretty nuts this time of year in this area. It is getting a bit dry though so hopefully that 60% chance of rain holds for Tuesday.

by Gunny
A beautiful day to fly.Just a bit of a x-wind. 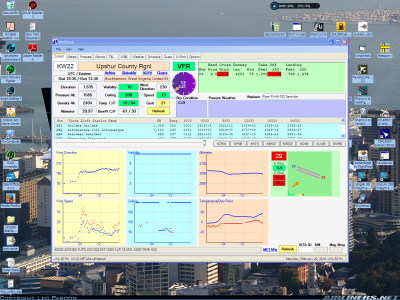 by Turbofan
Well the first storms of the year are heading this way (good, 'cause we need some rain). Severe thunderstorm watch in effect till 4:00 a.m. CST. Current temp is 63F with a dewpoint of 52F, so it's not that humid but enough for some storms. Then it's back to windy, dry and cold tomorrow, then warming again with another chance of storms late in the week into Monday next. Welcome to the transition period in the plains.

by Turbofan
After some very nice days for late Feb-early March, it appears the typical southern plains springtime weather pattern will start getting established overhead. Currently 66F with a dewpoint of 45F, which will be steadily increasing as we get very strong southerly winds around 40-45 mph with some higher gusts. A slight risk of severe weather is forecast for tomorrow, followed by good chances for general rain and storms after Tuesday of next week. 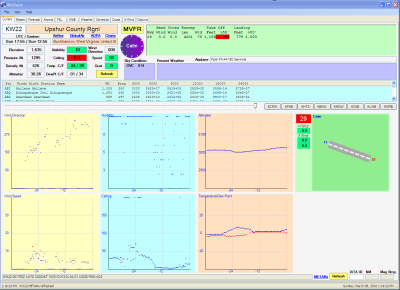 What software is it?

by Gunny
Called WXCheck not freeware about $30.00 American. but worth every penny.

by Turbofan
Currently 82F with winds from the SSW at 25-30, gusting to over 40 mph. Several large grassfires have broken out, an especially huge one in NW OK is out of control (winds there are even higher, gusting to over 50 mph at times). The smoke plume from that fire can be seen on radar and has gone all the way to about central Kansas. Hopefully the rain comes back this weekend as forecast.

by AdityaB
We have ALREADY touched 40°C +

No winds, just a small breeze in the evening

by Neocon
It got to the upper 60s F here in northwest TN today with lots of sunshine and a cool breeze. It's supposed to rain tomorrow.
All times are UTC
Page 1 of 5