Announcements which were previously posted on our Drupal and WordPress blogs.
Locked
4 posts • Page 1 of 1

Simply post your reason below as to why you would be the best candidate for the role and why members of YSFHQ should vote for you. That easy.

A. Nominee wrote:Hi YSFHQ! I am most suitable for this role because I am good at stuff. Remember that one time I did the thing? Please vote for me!

Let's throw the ol' hat in again, shall we?

If you don't know me yet, my name is Vic Viper. If you beautiful people want an admin for Online Play then I want to be your man. I've been around for almost 10 years now, been member of two combat squadrons and leader of one. I've participated in wars, friendly combat matches, and training new pilots (Been around the block you see)

I'm not just a combat pilot though, I really enjoy our airshows and have had the privilege of being behind the scenes helping set up or even flying in them. I want to grow both aspects of our community, civil and combat.

I look forward in serving the community as an admin, I'll see you ladies and gents in the great blue skies.
[

For those who don't know me. I'm dbd000. I am the CEO for Moa Airways Virtual Airline (Memberships Applications Welcome) and is part of the Event Staff at Abel Jets Virtual Airline. I'm not afraid to admit that I don't know too much about the role of being a staff member but I'm always happy to lend a hand when I know what I'm doing.

I focus mainly on civilian flying but also love flying military and aerobatic aircraft. I'm enlisted in the 4AW Fighter Wing and have got a repaint pack in the works. My favourite thing about the community is the opportunities and ideas that can arise from each and every member of the forum and the wider world (except spam bots, they suck).

I try to encourage members to try new things and to post any questions other members can answer, help others but most importantly, have fun.

Good luck to the candidates in all three categories including those running against me.

Pilots, Members, and community, it is my pleasure to run for admin of online play this semester.
How ironic you say, that the person who does the most flying offline, decides to run for admin of the online community. To you I say Touche, and I can't put the little squiggly mark over the E for some reason. Sad! I run to bring balance back to the force...I mean YS Flight online play. Shortly, I will lay out some ideas and reasons why I think you should vote for me. Who is Coop you ask? Good Question. Well, to start, I've been around flying YS Flight since 2013, and re-started the YS Flight Blue Angels back in 2014. You might have seen some of my YouTube videos, to which I say thanks for watching. But this past year brought change. I wanted to get the community involved with my flying, so I brought the YS flight Blue Angels back to online airshows. Then, I took the next step and hosted the highly successful YS Flight Aerobatic Expo. I mention these successes to show how I interact with the online community. Why Coop? Well, for one, my email servers are completely clean and I have no ties to the Russians. But on a serious note, I plan to get the community back involved online by encouraging/hosting more Fly-Ins, airshows, and fun events. Along with YS Stuff, I hope to get members of the community active with each other in other areas outside the community. While I like to joke around and have fun, I will certainly take a new role seriously and represent the YS community in the highest fashion. I hope you take a moment to consider voting for Coop so together, we can Make the Forums (and in this case online play) Great Again! 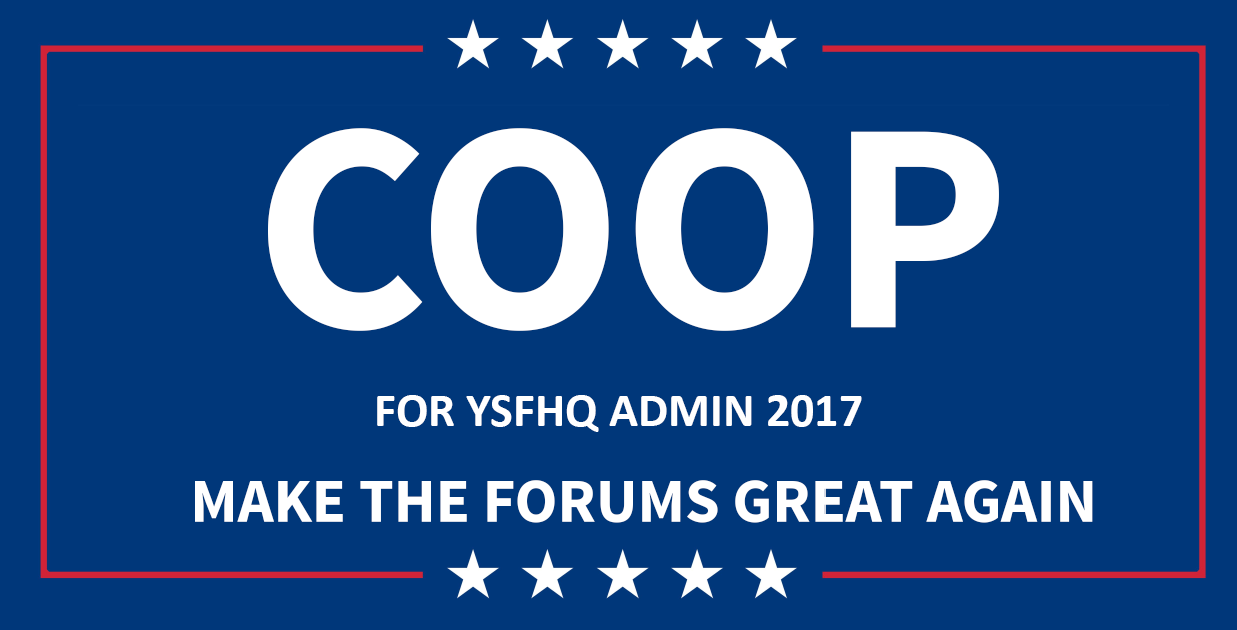