This thread is for the discussion of the proper use of the High drag bombs introduced in the initial 2011 version of YSFlight.


When Soji released the new retarded bombs in the latest test version of YS, he addressed one of the long standing wish-list items for many ground attack pilots. The new weapons promised a new era of low level strikes against defended targets, allowing strikers to come in well below the traditional 475-500ft limit for the comparable 500lb bombs, and even below the roughly 200ft limit for the lighter 250lb bombs.

Despite their advantages, however, the HD bombs are the most challenging weapons to properly employ in the game. No aiming recital was provided for the weapons, forcing pilots to estimate the correct aim point.

Practice indicates that when attacking from 100ft and between 300 and 600kt, the bombs will reliably fall between your 5 and 10 degrees down markings on HUD. High drags are also useful for very low altitude dive bombing, but aiming is a bit tricky.

I don't know how much this adds to the knowledge base but in the old days we called it Kentucky windage.

One thing I have found, this works well against buildings and ships if you go just a few feet above them. then you can drop the bomb and it will hit it after you have gone past.

Warning: Any ship worth targetting will cut you to ribbons with its guns
They say that he feeds upon the tears of newbs, and that he spent an entire day feeding an effigy of Ricm into a desk fan. All we know is, he's called Animal.
Top

In hind sight, be cautious bout using them anywhere that aaa is active
They say that he feeds upon the tears of newbs, and that he spent an entire day feeding an effigy of Ricm into a desk fan. All we know is, he's called Animal.
Top

To summarise, take out the AAA or go flat out on the deck (almost literally) and drop at the last second.
Top

Basicly they should be used to hit priority targets that dont' shoot back.

There are otehr situations that are less than ideal, and using this weapons against a target that can shoot back renders you all but bare ass naked.
They say that he feeds upon the tears of newbs, and that he spent an entire day feeding an effigy of Ricm into a desk fan. All we know is, he's called Animal.
Top

you know how fuel tanks acts as flares and can be used as napalm but HD can also be used in a similar manner but vertically aim the meatball on a designated target like a unlocked missile, shoot or drop it and pull up.

it will take time on dropping making the enemy forget what ouy did is just a joke a few minutes later, kaboO0Oom

im trying to say a presicion high altitude bombing as in where missiles cant reach you, dive, drop hd and pull back up.

this kight be stupid but the enemy might think on what you did forget it then the hd bomb is at their front door.

High altitude bombing with high drag bombs will be an almost impossible feat. Unlike normal bombs, they don't have a sight.

High drags were meant for low level cluster bombing by fighter bombers such as the THUD and PHANTOM so they would not blow them selves to kingdom come on 500 FT. passes.They were never meant for precision but area bombing as in the Ho Chi Min trail which by the way was never one particular place.

Learn how to do a lob-toss delivery - not as accurate, but you won't have to over fly the target.

This will sound like a stupid idea, but I've found it works alarmingly well.

After attacking a group of tanks, if there are a few left in one area (bomb radius), then once you pass over, pull up and over (225 degrees or more), and when they almost go below cockpit view, drop one. I have found that the drag kills forward motion allowing the bomb to fall nicely on target.

I generally drop them, whether like this or from a conventional approach, just before the target gets below the cockpit view.
Top 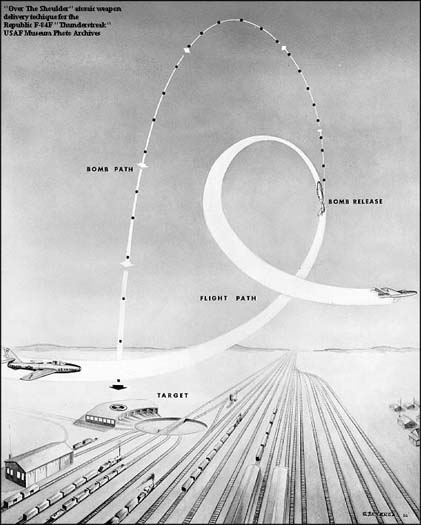 yeah, just continue the aircraft's motion 135 of the loop before release though.