This guide will tell you how to dogfight with the stock 16 setup and a good deal of modern aircraft, without all the theory behind the methods. It won't be entirely successful against a pilot who understands everything better than you, but it will make most of the people who read it a LOT better. I don't see a lot of good fighters on the servers, and if you guys learn to apply these simple things you will at least be able to hold your own. You will probably also be able to murder most people who don't know these things.

This guide will not describe advanced techniques and theory, it will only tell you things that work most of the time in practice, and in practical terms. It will not describe all alternative methods and styles either, just one method that works very well. It also assumes you are fairly new at this. It won't make you unbeatable, but it will make you a hell of a lot better.

The setup:
First things first, you need the right hardware configuration. I will list two configurations I find ideal, but they might not be perfect for you.
Mouse and keyboard:
mouse wheel up = throttle up
mouse wheel down = throttle down
right mouse button = flare
w key = look up
e key = spoiler on when pressed
f key = flaps
everything else is up to you

For your plane:
stock f-16, 30% fuel, no weapons. The reason for this is because you are light and will be able to get your nose on the target.

While in flight:
1.Always fly using full afterburner. This gives you more speed. You always want to be as fast as possible, because it makes you turn faster, which is better.
2.Next thing is to turn first at the merge. The merge is the first time you turn into your enemy. For example, if you and your enemy are flying straight at each other, the point where both of you pass each other is the merge. After this point you are both turning. Turn before the other guy turns, this gives you a better spot in the turn circle. And when you do turn, make it so that your wings are perpendicular to the horizon, then point your nose just a little above the horizon or a little below the horizon then pull up as hard as possible.
3. Deploy flaps after the merge turn. It makes you turn tighter (gives you more lift)
2.Never lose sight of the other guy or you will die, so use your look up button as much as needed.
3.The turn circle is a circle in the sky you are both turning along. Avoid leaving this circle as much as possible, because that is a break in your "geometry" which any opponent will exploit. In short, any time you are not turning as hard as possible into your opponent, you are running away. Running away means you just lost the fight.
4.Shoot whenever you get a chance. Sure, sometimes it's a little wasteful, but wasting a little ammo is better than being dead.
5.Imagine a vertical red line in the center of your screen. This is more or less your "lift vector" but we won't get into that. Continue to imagine that line on your screen when you look up. If you always keep your enemy on this line, you will have many chances to kill them. Here is a visual: 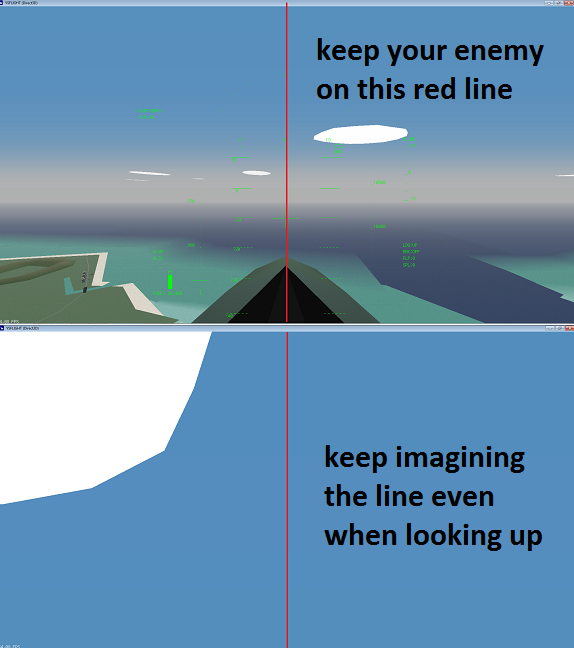 you don't need them on there 100% of the time, but at least about 80% of the time to close the distance. As you get better, you'll come to see that at times it is better to keep it in front of them, and at times behind them. This is alternating between the ys iterations of lag, lead and pure pursuits.
6. You turn tighter when you're going up, and you turn wider when you're going down. However, you also gain speed when you go down. Whenever you have enough speed to pull it off, you should turn up to gain the positional advantage. Whenever you need to speed up, turn down.
7. Anticipate where your enemy is going and cut their turn, while also doing all those other things.
8. If you are above your enemy and turning into them, don't be afraid to use the spoiler when pressed key you assigned to "perch" on top of them and get some shots in.

Anyways, the goal was to keep this simple, short and non technical, so that's it. Follow those 8 rules well enough and you can kill most people. Don't use them to be a dick.

As of may 2012, we are phasing out the stock 16 dogfight as the standard combat duel, but these trchniques remain applicable.
Top

Thank you very much!

Thanks a lot. Midnight Rambler said he would give me a lesson but all he did was shoot me down.

Wait wait wait. Do weapons and fuel actually make the plane heavier/lighter in ysflight? Other than that, thanks. I need to practice my gunning skills, they're not very good in mordern aircraft.

Right, but how do you set the fuel levels in dogfights? (I don't know where to set the default fuel). (Also, sorry for rapid response.)
Top

Online it is through the normal fuel setting. Offline can be changed through a mission file being modified through notepad.

...or far more simply, at the select aircraft screen.
Top

As seen in my combat manual, lol looks legit.

Tahnks for the post shutter... learned a few additional things.. I bet its not that easy with WW2 aircrafts because I always run out of power while turning. I have made it a habit to fly high then and stall and recover.
Flying is not about leaving the ground, it is about touching the skies...
Top
Post Reply
11 posts • Page 1 of 1