[/url]
Welcome:
This is the home page for the Civil Aviation Server for YS Flight. To the right there are links to find what addons are installed and the rules for the server.

Mission Statement:
It is the mission of the YS Civil Aviation Server to provide a place for pilots to fly private and commercial aircraft. The YS Civil Aviation Server offers a place for the pilots of virtual airlines to log flights. It also offers those who prefer general aviation an assortment of smaller aircraft. In the real world, civilian pilots share the skies with the military, and that bit of realism has been added to YSCAS. This server still has civil aviation as its primary focus.

Server Conditions:
Collisions are turned off. Weapons, Missiles, Blackout and Land Everywhere is turned on. The day/night cycle may be turned on.
The weather will change from time to time with little or no warning. Check the YS Server List for recent conditions.

Availability*:
YSCAS will be available most of the time.
*Times are subject to change without warning.

Some Notes:
A full list of installed aircraft packs is on the website (link at the top), along with a schedule of maps. I will be changing maps every Tuesday afternoon and Friday night. I am open to suggestions. If there are particular maps you would like me to add to the rotation, let me know. The same goes for aircraft, either military or civilian. You should also install the PMNV Ground Objects Pack because all maps will include enemy and friendly military bases and/or fleets.

by Neocon
I have just updated the previous post, as well as the home page for the server. From now I plan to have changing weather conditions from time to time. Sometimes there will be more or less wind from various directions, changing levels of fog (visibility), and changes from day to night. This will add to the realism of civilian flying in varying conditions.

by Turbofan
Quick question: does this work with the current stable version (a.k.a. 2011 version) most everyone is still using?

by Neocon
The current, stable version is 20130805. I've done all of my testing of OYS with that version, and the day/night cycle and changing weather works.

by Turbofan
Ahh ok, 'cause up until now, it said that the server version is the 2011 one. I guess Soji didn't change the version number in the latest stable release.

by Neocon
YSCAS has now loaded its weapons (see first post and new logo). The primary mission of YSCAS remains civil aviation, but civilian pilots have to deal with fighter jets and the occasional flight through a war zone, so now you will get to enjoy that in YSF. Note that the rules still apply: No vulching, no civilian killing, and obey the "three flare rule". Any map used on the server that did not have enemy bases will have those included while running on my server. You may see an enemy position on a remote island or a region of the map where there is rarely any air traffic.

IGNORE:
For the upcoming future, YSCAS will be closed for a few hours each night to reduce lag on NSWL. Eventually, once OYS supports moving and shooting ground objects, the servers will merge into a dual-purpose server with a continued emphasis on civilian flight with plenty of opportunities for weapons-loaded action.

by Neocon
I am posting today to officially announce that the number of aircraft installed on YSCAS has been significantly reduced, with nearly 3/4 of the former list removed. Most of the addons that were removed were rarely-used, but some of them were popular. I have made this decision to reduce the chances of errors.

by Dragon_Mech
i have a suggestion Patrick. would it be possible for you to set up a public poll to add one of the popular aircraft packs the you removed back to the YSCAS server?

by Neocon
Post your suggestions here. It's difficult to make a poll with infinite options. That said, I'm wanting to avoid having a lot of downloads.

by Barr
Well I think it's better to just add individual craft especially for the big repaint packs if you only need one or two aircraft. Like tf58s. About half are civilian and you don't want all the military on there.

by Neocon
The problem with TF58's pack is the errors. I will not use any part of any pack that has errors. Even if I fix them on my end, others may not have them fixed and it will cause them errors. In my experience, most of the errors I've had on servers were caused by the Down in Flames pack.

by Dragon_Mech
i was thinking of the high detailed 747's from tf58's aircraft. they are error free and very fun to fly. not to mention a beautyful aircraft in general.

by Neocon
I need help. I have been trying to find more maps to try out on the server. For example, in a few weeks I am going to try out Gunny's West Virginia Winter map and Chicago v3.0 from Mh3w. I'm looking for other maps with at least two civilian airports that I could try out. If anyone could point me in the direction of some maps I might not have seen before, it would be great.

by Barr
Well I'm planning on sending turbofan a box of Redbull and monster drinks so he can speed up the turbot update.

Anywho how about the Meldis map. I haven't been able to try it and don't know if there are 2 or more airports but I really liked the screenshots.

by decaff_42
There are a lot of airports maybe like 20ish. It is really one of the best all around maps i've seen...that is if your computer can handle it. There's military, and nice sort to mid-range civil flights you can do.

by Turbofan
There is the test map (screenshot of map below) that was sensational when it first came out (at least I was flying on it all the time; need to get back into it). It was hosted on 2ch and was officially designated as the moroMAP_060303. I have it but I'm not sure if I can just release it even with credits to moro. Also quite sure this work is entirely fictional. 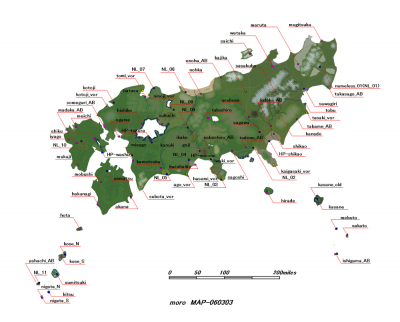 As far as more maps on the server with at least two airports - 2chmap3kai and York Valley are some that come to mind. The 2chmap3kai is pretty good stuff, there are several airports and airbases, some of which are large international airports as well. York Valley is fairly well-known by now, but it can be heavy on some computers.


BARRACUZ wrote:Well I'm planning on sending turbofan a box of Redbull and monster drinks so he can speed up the turbot update.

I appreciate the thought but I don't drink either of those. I'll stick to my tea/coffee and maybe drink some more of it.

On the other hand, the expansion is coming along nicely. You can expect some more updates soon. As far as a release date goes, I blew the last two deadlines so for now, I'll just say it will be released next month.

by Neocon
It occurred to me that I've never flown on the stock North Kyusyu map, so I added it to the list.

I may have to take West Virginia off, though. It is slightly overloading my machine.

by Flake
I remember flying on MoroMap and it was a sensational map to fly on - good scenery to look at and just big enough to be a chore to get across map but small enough to be not annoying? Like Hawaii, maybe a bit bigger though.

by Neocon
I canceled West Virginia, but Meldis is a really impressive map with decent frame rates. It's going online on Tuesday.

I looked far and wide for MoroMap Test Map 060303, and I found many references. One of them appeared to be Moro's Google Site page, but the link was dead. https://sites.google.com/site/ysfishscenery/home
All times are UTC
Page 1 of 2