As discussed in this topic, the Special Armed Response Force and the 4th Aerial Squadron "Scorpions" will be maintaining their alliance in response to the disbanding of GrunSolutions PMC's YSFlight division. However, this alliance is aimed to replace what GrunSolutions was for YSFHQ. This alliance, unless it is changed in the future, is known as the Neo United Nations. 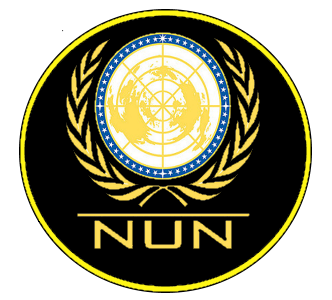 NEO UNITED NATIONS
This is an announcement that the Neo United Nations has been officially established with the founding squadrons of the Special Armed Response Force and the 4th Aerial Squadron "Scorpions!" There are a few things to get out of the way about the NUN. This topic should hopefully answer all of your questions. Let's start with a brief overview of the NUN, its objective, and its structure.

Overview
The Neo United Nations is a large encompassing alliance of squadrons, airlines, and aerobatic teams dedicated to making the community of YSFHQ a better place. The NUN replaces the role of GrunSolutions as a platform for squadrons to communicate, operate, and build together and is much more than that.

Structure
The Neo United Nations is divided into three divisions. These are military, civilian, and aerobatics respectively. Organizations that join the NUN may take part in any or all three of these divisions. However, organizations that join the NUN are not under any form of direct control. The only current catch is that each member state of the NUN follow the NUN's rules. These are very simple rules that are built to help protect the interests and rights of all parties involved, as well as YSFHQ in general.

The military division of the NUN is called the Neo United Nations Independent Military Forces. [NUNIMF - IMF] Each squadron that participates in the NUNIMF will be independent from one another, but will operate together for joint sorties and missions. Not all NUNIMF squadrons have to have the same goals, however it is advised that each squadron help each other out with their objectives.

The civilian division of the NUN is called the Neo United Nations Civil Services Pact. [NUNCSP - CSP] This pact is an alliance of participating airlines. Airlines can help one another and the NUNCSP can be a platform for airlines to provide joint air traffic control sessions. The NUNCSP can also help airlines get better known by simply allowing them to discuss and meet together.

The aerobatic division of the NUN is called the Neo United Nations Aerobatic Commission. [NUNAC - NAC] Participating aerobatic groups may work together to develop routines for airshows, participate in those airshows and set up airshows as well by using the NUN as a platform to do so. The possibilities are limitless.

No one is in charge of any division or in charge of the Neo United Nations in general. However, currently, there is a rotating figurehead position called the Chairman(woman) of the Neo United Nations. Each month a different squadron or organization leader will be able to be Chairman. The Chairman of the NUN handles the core aspects of the NUN such as a website, announcements, and relaying information to the public in general on behalf of the entire NUN. This chairman has no real administrative power, however if their position is abused to destroy a website, relay false information to the community or tamper with diplomatic relations, action will be taken to circumvent this.

All leaders of the organizations in the NUN will have a seat in the council. This council will decide things such as rules and issues such as rulebreakers and such. Changes to policy will require a two thirds vote from all council members. The council should not be able to administrate individual squadrons or groups.

Objective
The objective of the Neo United Nations is to bring together groups of all kinds on YSFlight for peace and cooperation as to make the YSFlight HQ community a better place to fly. It also aims to prevent any one group or person from retaining any amount of power over any other group in the NUN for nearly any period of time.

Rules
Members of the NUN must follow a simple set of rules.

1. Do not aggress upon other NUN members or member states maliciously. This means no bullying or trolling or cutting other groups down. This is very bad and not constructive. We are here to help one another. If you have an issue with another group, lets discuss it civilly.

2. The same as rule #1, but it applies to all members of YSFlight HQ.

3. Do not try to steal members from other groups in the NUN. If someone wishes to transfer they must do it on their own will.

4. Follow all rules of YSFlight HQ, including rules of engagement for servers and server etiquette.

5. Don't take the game too seriously! It's a game! It's fun to roleplay and treat missions like they are serious, but there is a massive emphasis on the fun!

Membership
Any organization on YSFlight HQ may join the Neo United Nations alliance. However their entrance must be approved by two thirds of the council. You may apply in this thread or you may PM one of the leaders and they can bring it up with the current council.
FAQ

Q: I don't want my team underneath a conglomerate, I would rather retain control for myself!

A: Your organization will not be controlled by anyone while in the NUN. The only things that you will have to abide by are rules that are very likely rules that are in YSFHQ itself, as well as simple rules to prevent you from cutting down others. This is about willful cooperation.

A: We would be very disappointed to see you leave, and we would likely try to talk you out of it, but there would be nothing to stop you.

Q: I would like to have my group join the NUN, but I only have one member, can I still join?

A: It is somewhat unlikely that we would accept you for a few reasons. Firstly, this would be an easy way to take control of the council, by having many 1 member squadrons lead the table. They could easily take control of the two thirds majority and take over the alliance. Another reason is that 1 member squadrons have a very low chance of growth due to the lack of administrative infrastructure. Strong clans develop from a core group of leaders that work together. We would not immediately turn you away, but instead we would advise you to join an existing group in the NUN. If you continue to try and grow with your 1 member squadron without much hope of getting any members, you will only hurt the community by not joining a group and helping everyone involved by doing so. Don't be greedy.

Q: What kind of events and activities will the NUN take part in?

A: Anything really! We could establish anything the people in the NUN want to do. Combat weekends, airshows, new airline routes and ATC sessions, anything, assuming we have the interest and the resources to do so.
Current Members of the Neo United Nations We also have a Discord server with everything needed to manage the NUN. You are welcome to join here https://discord.gg/ru22tTH

Guests at the server do not have access to the flight voice frequencies, HD voice and some text channels. They may still use the general text and voice channels and some others. Please follow server rules and try not to get yourself kicked for trolling, whining or causing problems. / Have your Organization Join the Neo United Nations Today!
Last edited by m88youngling on Sat Dec 31, 2016 4:09 am, edited 1 time in total.

Best of luck to you guys! Hope everything works out for you all!

The North East Air Force and Palm Security are now official member squadrons participating in the NUN Independent Military Forces. Welcome to them and on behalf of SARF I hope we can continue to use this alliance as a medium of cooperation between us to improve the quality of YS combat and mend the community after recent events.

I am announcing that Q.R.F is now officially joining NUN, and will conduct missions in behalf of NUN.
Top

After a short period of time in this alliance I have concluded that NUNIMF is clearly not the best position for Palm Security to remain in. As of January 2nd of 2017, Palm Security will be leaving NUNIMF due to a false sense of entitlement and detestable malice against my unit. This was not only done unknowingly behind our back in addition to Palm Security's deliberate delay from entry via biased opinions and verbal attack in regards to the NUNIMF alliance. These attacks were not just directed at me, but also my squadron, Palm Security. I am not biased against the factions of this alliance, but rather against certain people who have decided at some point, and I quote: "[Palm Security] had no chance the second they tried to pull it alone." However, this has been proven untrue. Yet months later, Palm Security still here and do not plan to disband. These points further strengthen my decision to pull Palm Security out of NUNIMF. I feel this decision will further strengthen Palm Security and I wish NUNIMF the best of luck in the future.
Efforts and courage are not enough without purpose and direction. ~ John F. Kennedy

Some notes on NUN activities, I'm working on some ideas for NUN style tailcodes for NUNIMF squadrons/civilians, but I would say the focus has been mainly the NUNIMF since no airlines have been around.

The NUN is doing well but we have not yet selected a chairman (if there even will be one) so that will be discussed at some point in the future.

Probably the most hilarious squadron on YS Flight.