I am proud to announce the release of 6 of the 9 GrunSol aircraft that i am able to publicly release.
this pack contains 4 helicopters and 2 F-15E Variants. here are the aircraft included in this pack. 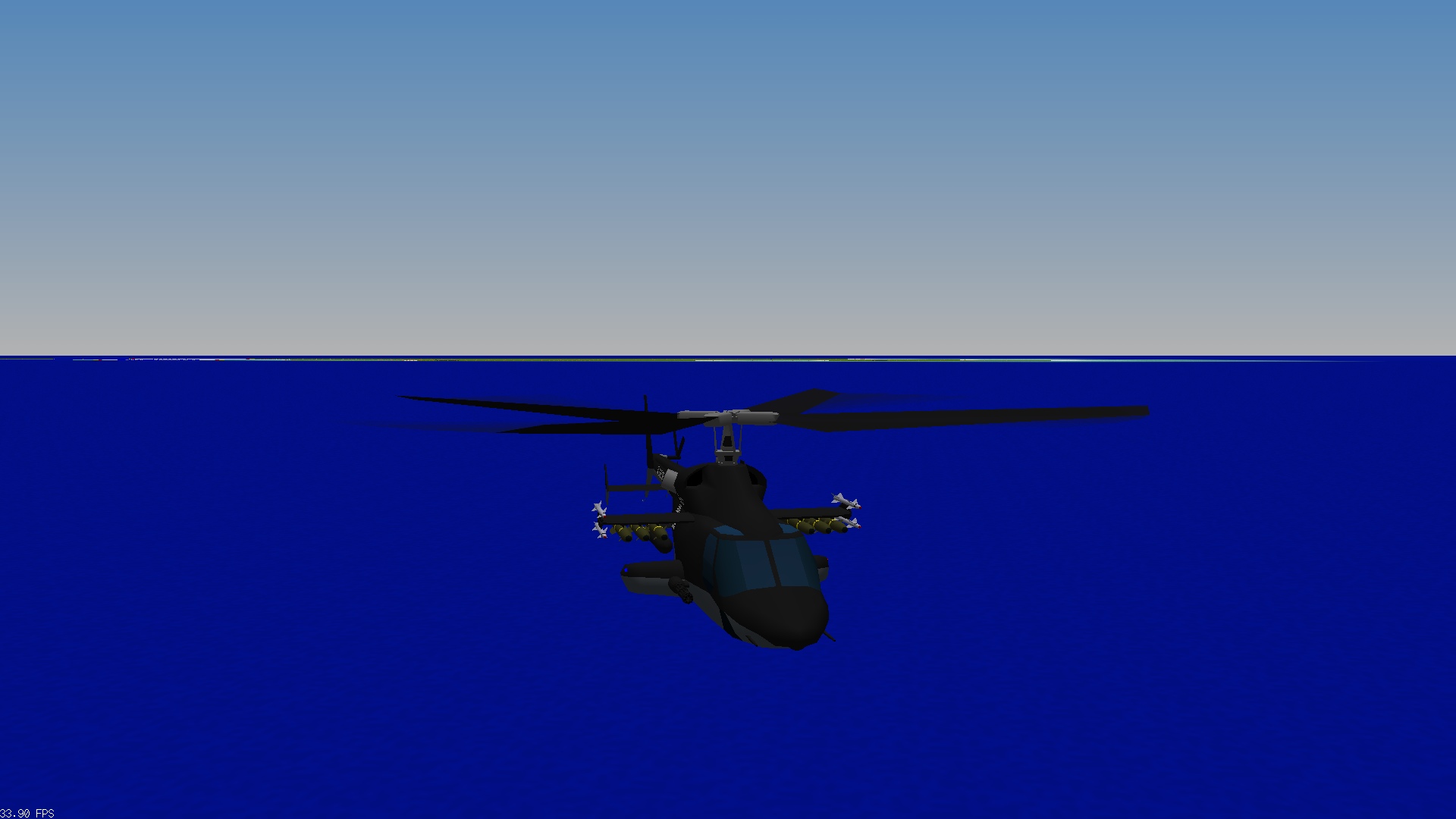 this is the RH-222 Stinger. a light weight recon/attack copter that has 2 gattling style guns and can carry upto 6 Hellfire missiles and upto either 4 AAM or 4 A-AAM missiles. i can also carry two 250lb droptanks to extend flight time. 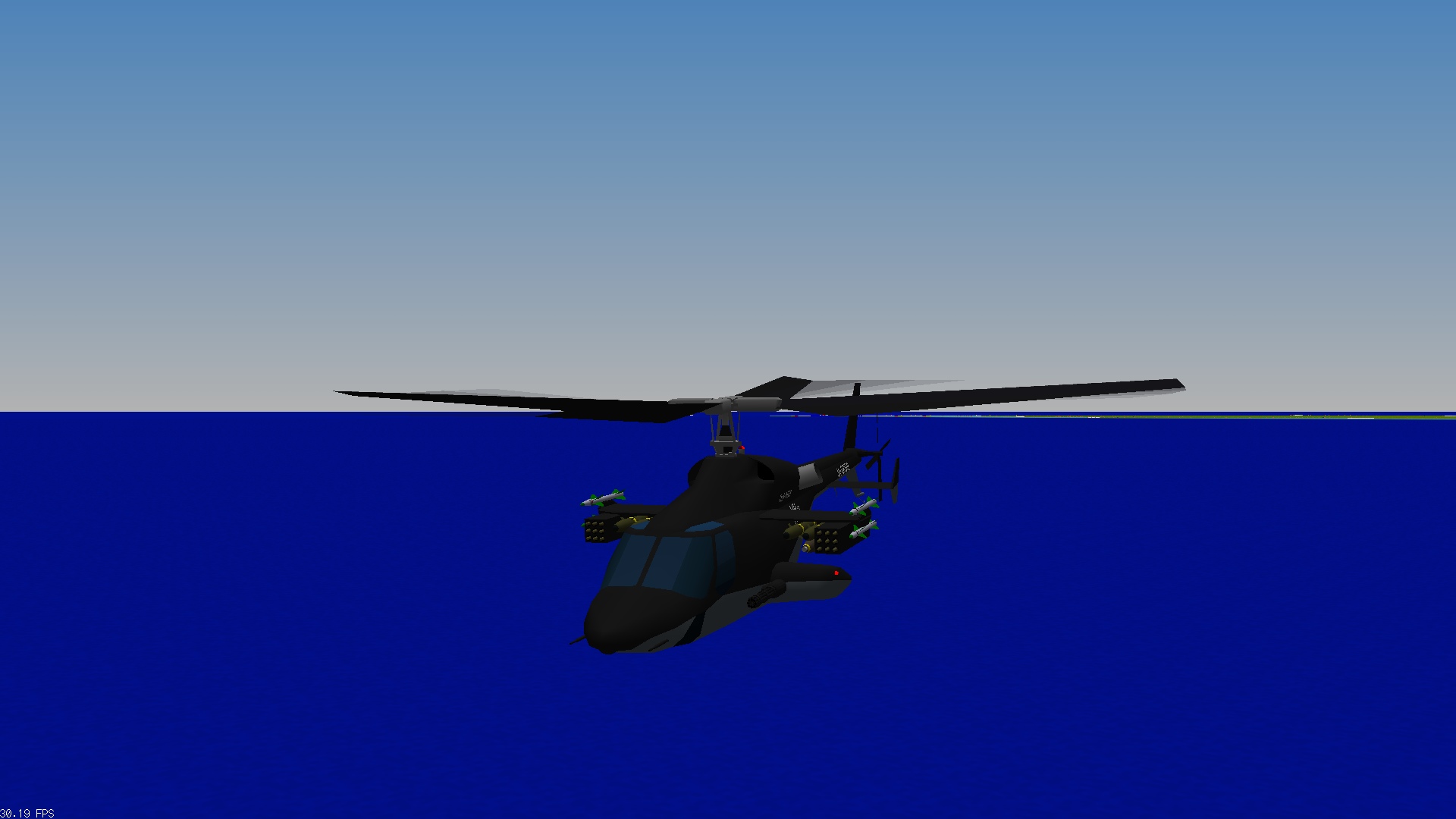 here is the AH-222 Madcat. it is a light attacker equiped with 2 gattling style guns as well as rocket launchers at the cost of 2 Hellfire missile hardpoints. the Madcat can carry 18 Hydra70 rockets, 4 Hellfire missiles, upto either 4 AAM or 4 A-AAM missiles. the Madcat can also carry either two 500lb low-drag bombs, two 500lb high-drag bombs, or two 250lb droptanks. 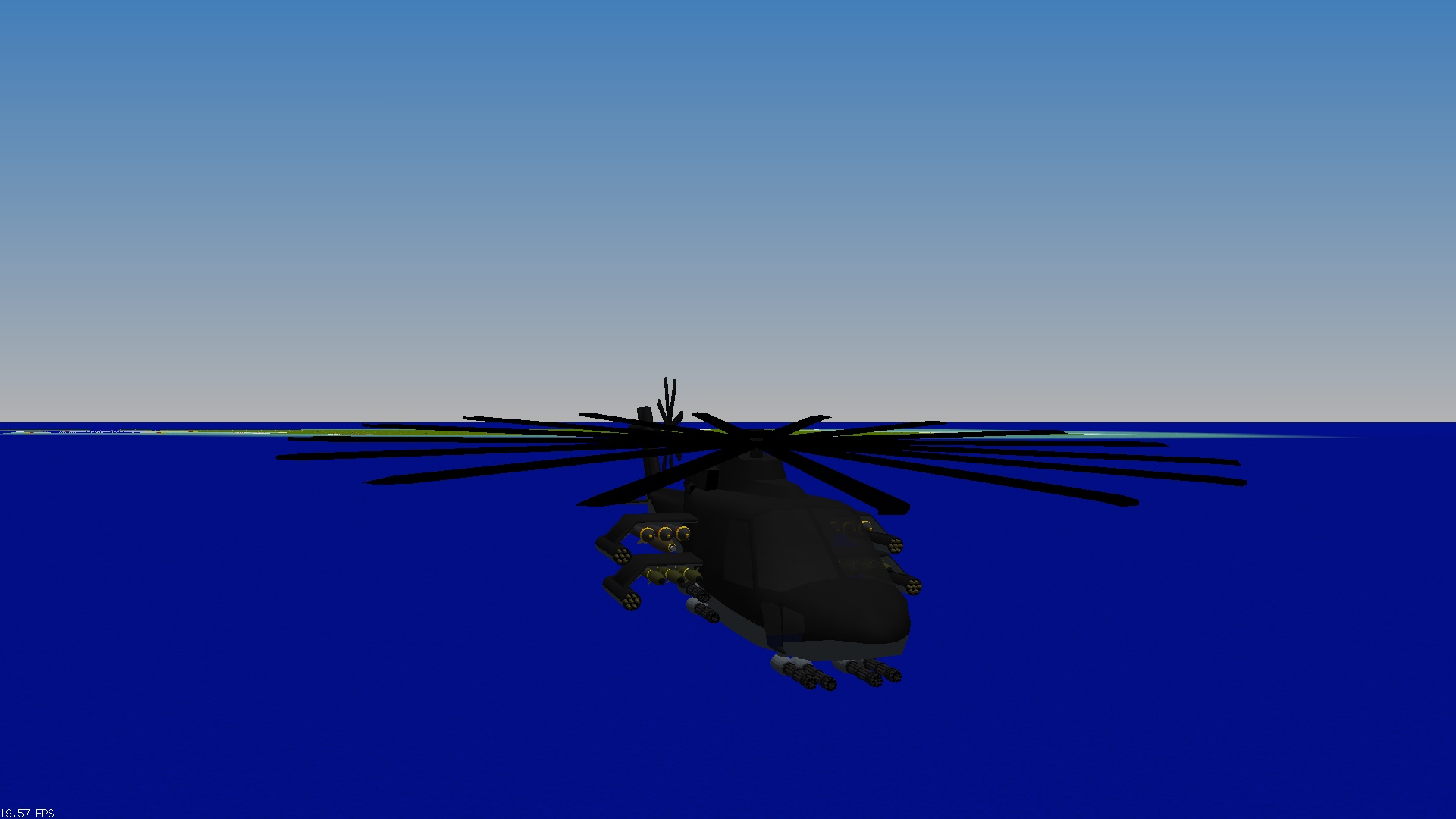 this is the AH-76C Bushwhacker. a medium weight attacker/gunship with 8 fixed gattling style cannons.
the Bushwhacker can carry 28 rockets, upto 12 AGMs, 6 AAMs(on the upper hardpoints in place of the AGMs), and either two 500lb low-drag bombs, two 500lb high-drag bombs, or two 300lb droptanks. i also increases the amount of blades on the main rotor from the original 4 to the current 16. the tail rotor has 8 blades. 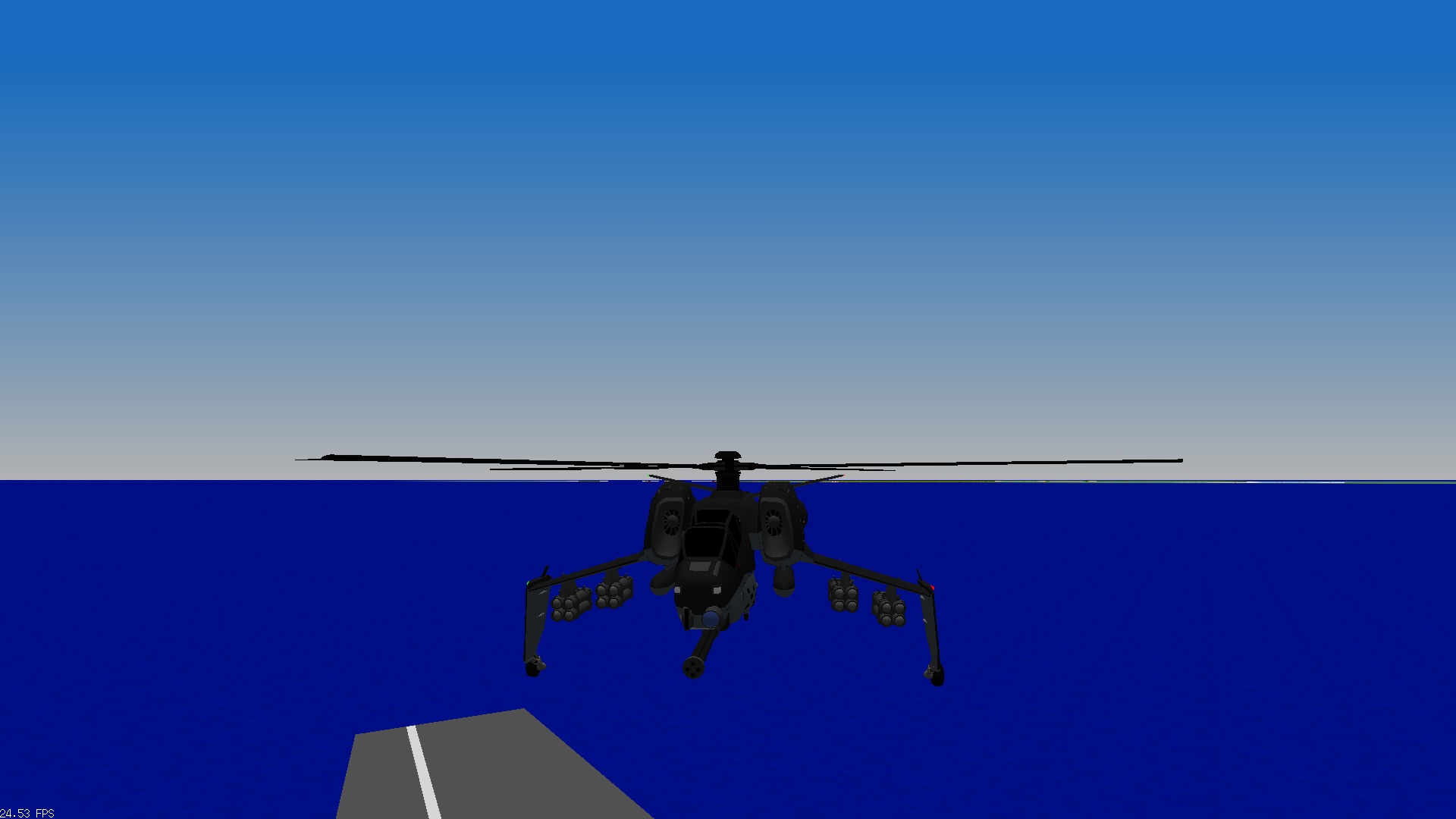 this is a modified version of Utachy's AFH-02B Hellhound. i removed the rocktpods on the outer mounts and replaced them with two more AGM missile launchers. for a total of 16 AGMs. the top two tubes of each of the inner launchers can also hold AAMs. for a total of 4 AAMs. i also added pylons under the engines for two 450lb droptanks. 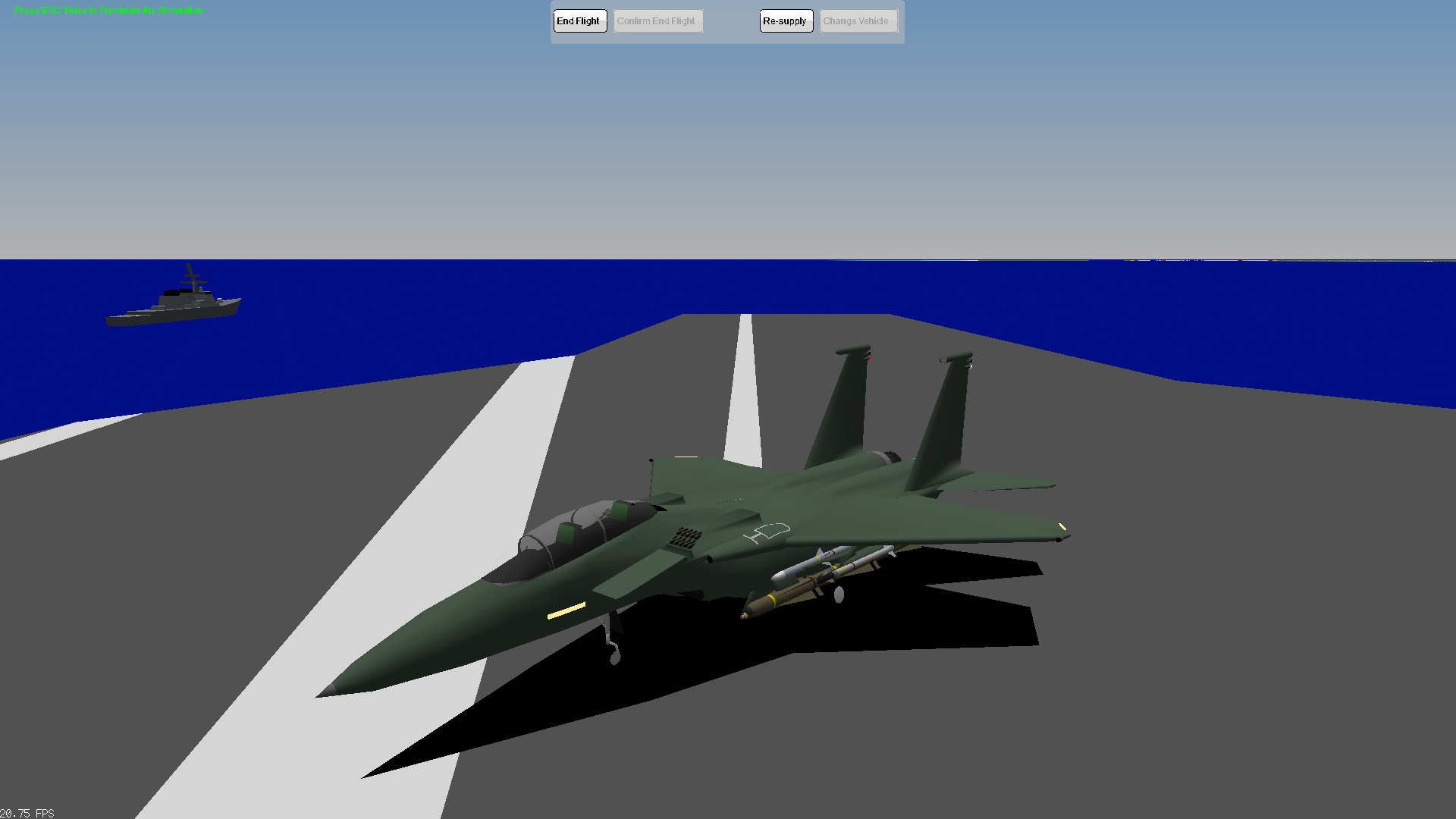 this is a repainted version of the Grun F-15E Strike Eagle Block 3. the only update to this aircraft is an increase of the gunpower from 1 to 2. 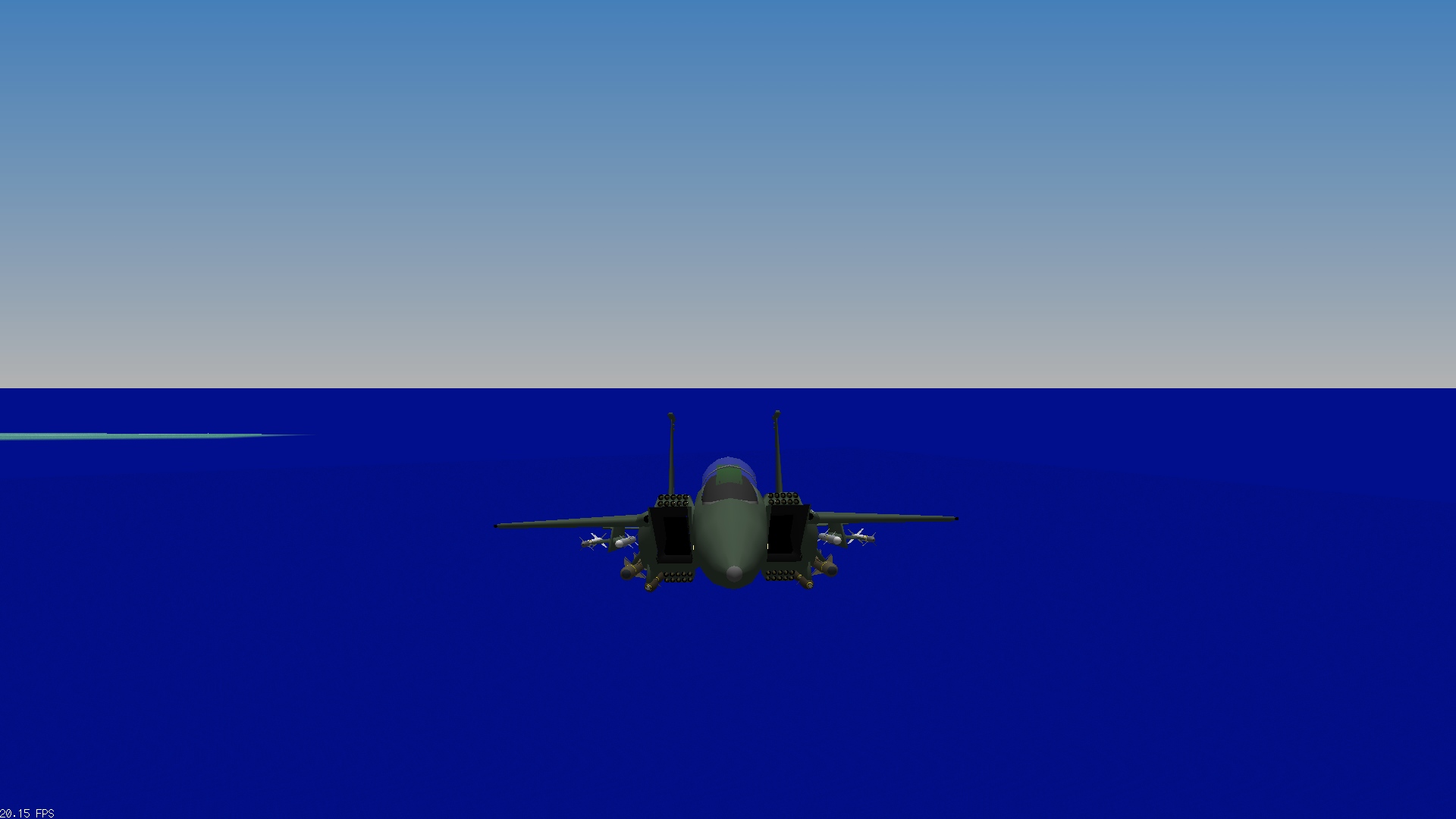 this is the Grun F-15E Strike Eagle Block 4. it is a modfied version of the XF-15M Marauding Eagle. the large GAU-8 cannon was removed and replaced with the same wing root cannons as the block 3 F-15E. the rocket launchers on the underside were kept to increase the rocket payload from 20 to 40

some of these aircraft were closer to completion than others when GrunSol was disbanded. that is why some aircraft have tail codes and others don't. but these aircraft are in flying condition.

Modders notes:
:the RH-222 Stinger is slightly faster than the AH-222 Madcat.
:the RH-222, AH-222 and AH-76C simulate fuel dumping with the afterburner. players with a button assigned to the "Full Throttle" function in YSFlight, should refrain from using it with these helos.
: for some reason,YSflight's autopilot has a hard time hovering the RH-222, AH-222 and AH-76C. if pilots want to hover these helos, they need to slow these helos to below 5kts and get them as close to level as possible before activating the autopilot. or else the autopilot will make these helos crash.

@Dragon_Mech Awesome job as always! Thanks so much.
Top

It's kind of crazy to see what GrunSolutions had in store. Even I as a (new at the time) member had no idea some of these we're coming out! It appears to me that the AH-76 resembles a highly modified S-76 Machine of Death. In other words, YEAH! A BADASS S-76! As always, excellent job Dragon Mech!
Efforts and courage are not enough without purpose and direction. ~ John F. Kennedy

you are right. the base model is an S-76c that is in the CEP2 pack.
Owner, Dragonic Machine Industries

Hi everyone. i forgot to mention that YSFlight's AI is unable to fly the RH-222, AH-222 and AH-76C in intercept missions or in ground to air defence missions. when these helicopters spawn, they will instantly begin to fall and "wiggle" back and forth on the Z-axis.
Owner, Dragonic Machine Industries