This map covers the state of Florida, along with portions of land in Georgia and some airports in Alabama. This release is a long-term work in progress. Currently, this map inclues a variety of airports and military air fields across the state. KTMB and KEYW were provided by Gunny. KDAB was provided by VNAF-ONE. Portions of taxiways at KNPA were modified from those created by Kujo. Cul-de-Sac was made by Turbofan and takes the place of real-world airport 35FA.
This map includes: KEYW, KTMB, KMIA, KDAB, KNIP, KJAX, KVQQ, KVPS, KPNS, KNPA, KJKA, KGNV, CDS, 17FL, KOCF, KTPF, KTPA, KMCO, KMLB, and KRSW.
Requires these ground objects: PMNV, Hotelfox, Airbourne, and TF58. I am guessing Tampa/St Pete will be added later?
Top

Did you make any gator ground objects or the notorious Florida man too?

Well, in that case, see you later gator!

Turbofan wrote:Well, in that case, see you later gator!

**Runs out of the HQ dorm, gets on his bike and high-tails it**

I did a major improvement to the areas around Key West and Miami, added more roads to the map, and played around with street lighting and NPC cars on the roads in Key West. Still no gators, but several new airports have been added. The new airports are Gainesville, Ocala, Jumbolair, Peter O Knight, Southwest Florida International, and Turbofan's fictional Cul-de-Sac, which takes the place of real-world airport 35FA in Cross Creek.
This map includes: KEYW, KTMB, KMIA, KDAB, KNIP, KJAX, KVQQ, KVPS, KPNS, KNPA, KJKA, KGNV, CDS, 17FL, KOCF, KTPF, and KRSW.
Requires these ground objects: PMNV, KZS, Airbourne, and TF58.

Are there any plans to add KMOB? That's my home airport.

Right now there are plans to add every airport in the world. Hopefully I'll be finished by 2257.

Patrick31337 wrote:Right now there are plans to add every airport in the world. Hopefully I'll be finished by 2257.

Let's see here. In 2010 there was an estimated 43,983 airports in the world. Subtract the total amount of airports you've made ever...umm... 100? Well anyways you don't have that much left: ! Just 43,800 airports. If it takes you 8 hours to make each one you would be done in 2056! But of course if you add all the surrounding scenery and other factors that should bump the finish date to around 2100! Good luck my friend.

I just uploaded an update. The new version changes the name from Florida-2016 to Florida[PMNV]. The only real change is that it now includes Patrick Air Force Base.

Three new airports, Tampa, Orlando, and Melbourne, have been added to the map. Have fun. 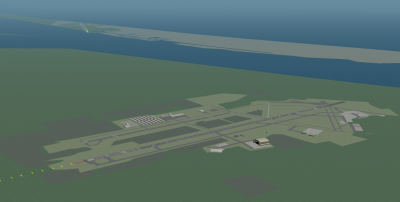 Melbourne International with Patrick AFB in the background.

Lol too much work for Patrick. You're talking about every city that exists in Florida.

no only a bit of cities
for exaple: miami and orlando only for first

The first goal is to have every airport in the world by 2030, although that will probably only include ever international-level airport and smaller airports by 2050. After that will come cities. I hope to have every building on Earth in YSF by 2082, which will be my 100th birthday. So just wait 65 years and I should have your request fully fulfilled.

It is incredible the size of that map, you can be a whole day flying !!!
Thanks Patrick!
.:[Special Armed Response Force]:.
ZaurixAiprax - General Resource Leadder