Large packs consisting of more than one type of aircraft.
Post Reply
8 posts • Page 1 of 1 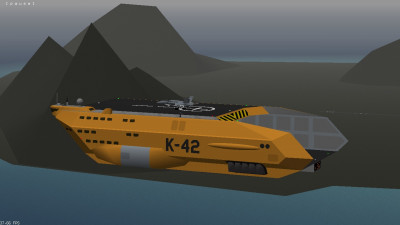 This is based on Soji's stock SMALL MAP, with a few extra ground targets and other objects to demonstrate the capabilities of Airbase One. It also includes the ground object Nuke_Target, at heading 300 from Airbase One, about 30 miles out. Drop a 500lb bomb on it and see what happens!

The Airbase vehicle is of course fictitious, presumably using some kind of anti-gravity device (perhaps those grey radiator-looking shapes either side of the hull?) Also not sure how the crew would stay upright in 120 knot (222 kmh) winds. It is armed with a turret firing gunpower 20 shells and air-to-ground rockets. This also covers air defence for the lower hemisphere. The upper hemisphere is defended by a Mad Colonel who takes pot shots at passing enemies with his Colt 45. Why not?
NOTE: The decks have no arresting wires. You have to touch down at about 125-130 knots with the wheelbrakes ON.
Both decks have their own ILS.

Thanks and credits:
To Soji for the SMALL MAP. Also to YSMajor... I based the deck crew and Mad Colonel on figures from your USS Ticonderoga model. I borrowed heavily from Soji's Gepard tank for the lesser-known TURRET commands.

Technical: DNMs, DATs and ACPs:
The Airbase is in 3 parts: Airbase_One (file AB1.) which is the main part of the model, Airbase_TD (file AB1_TD.) which is the top deck, and Airbase_IL (AB1_IL.) which is the green indicator light.
I felt the indicator light became necessary because the base can turn without warning, usually when you're just about to land. When the green light swings off centre, you have 10 seconds to either land or abort.

Erroneous Zones:
The top deck does a strange slide forward in the first instant of the game - probably the top deck hitting the collision mesh of the main deck. The carrier deck file is offset by some 20+ metres to compensate, as is the top deck start position. Trying to make a single deck with two levels caused planes to violently kick nose-up on takeoff.

Also, the Mad Colonel's gun arm is not aligned to the line of fire. For some reason I could never get the TURRETPT command to do what I wanted. I wanted his arm to be straight down at rest, and aimed true when firing. Can anyone else nut this out and make it work?

If installing in another scenery, I found it best to face all three objects to the north. The Indicator has to be Z+500m "up" from the other two. The motion path should begin at least another Z+50m beyond that. All three objects should use Motion Path Offset.

Let me know of any problems or issues. Have fun with it!
Top

Brilliant! Thanks for sharing

Hell yeah! We needed more floating carriers. I tried that nuke target, saw a huge white/grey flash. This has potential : )

Now to try combining this with the 49th's fuel/air bombs

I saw the flash too. Tried again, and just got a normal burst. So I think it only works once. Amazing work!
Fliped out of the arena, again!

Yeah, it only works once. It's just a plain ordinary ground object with a huge collision mesh, and a HITRADIUS of 10000m. The NOSHADOW keyword prevents leaving a huge black mark before & after. You could make it bigger by adjusting the HITRADIUS keyword to simulate whatever megatonnage you like. Could be used for simulating different Cold War attack runs in an F-100... drop the Bomb and get outside the blast radius.

Glad you're liking it.
Top

Grigor wrote: ↑
Thu May 25, 2017 11:18 pm
Yeah, it only works once. It's just a plain ordinary ground object with a huge collision mesh, and a HITRADIUS of 10000m. The NOSHADOW keyword prevents leaving a huge black mark before & after. You could make it bigger by adjusting the HITRADIUS keyword to simulate whatever megatonnage you like. Could be used for simulating different Cold War attack runs in an F-100... drop the Bomb and get outside the blast radius.

Glad you're liking it.

But I know one more variant - using large collision for aircraft.

... its possible make something what really expected.

P.S.: Yeah, this MOAB would be different type of bombs in YSFlight, but using tricks, describeed in YSFlight Handbook, its possible make missions where MOAB dropping could be part of scenario; also it could be used in online games, standart missions, etc.