Large packs consisting of more than one type of aircraft.
Post Reply
20 posts • Page 1 of 1

These are ground objects created by me for use in my maps, but anyone can include them in their own maps. Some of these reuse stock objects or modified GAC planes, but the pack is 99% original work. If you choose to include them with your map, please include a link to download the pack from this site. I update the pack with new objects with each map release.

What's new? The submarine and pirate boat now fire guns and missiles at longer ranges. No animation in either, though. The jetways now have a null srf file so you won't accidentally blow them up if you get too close. New to the pack is a set of stairs on a platform that allows them to extend up and down.

[instmod]1. Download the compressed file from my site. It is at the very bottom of the page.
2. Unzip the .zip folder.
3. Move the ground and user folders into your main YSF folder.[/instmod]

New update: The long-range VOR has been replaced because it was causing errors. Two new boats have also been added and will be used in future maps.

I just updated the pack. I turned the VOR box object into the new ILS box and created a new .srf for the long-range VOR. I also added DME entries to both, although I think it only works on the VOR.

I just made an update with 100m and 50m trees; a halo, markers, and equipment for racing; and some repaired .dats for several moving ground objects. I also re-worked the playing field surface of the stadium ground object so it is above the ground enough that its shadow will no longer block it out.

Many new objects have been added since 2014. See posts below for information.

Added the Elite Carrier, a floating airport and resort hotel. 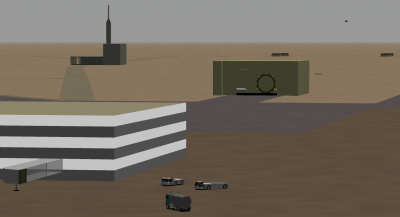 I never got around to it, and then other things got in the way. I may make one in the future, though.

I looked around for images of NDB antennas and found that not all of them look like the stock NDB tower. I based this one on a smaller unit, so it doesn't have as much range (Stock range is 60km, this one is 45km). I added it to my ground objects pack, along with a segmented circle/windsock that is half the size of the original. Those trees in the background are also part of a new object I added that is a smaller version of the stock tree grouping. The trees are the same size, but there aren't as many and they aren't spread over such a large area. 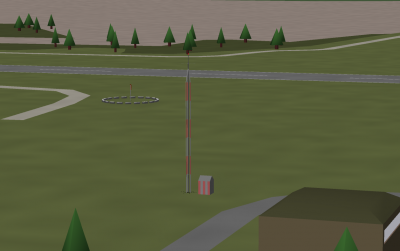 Another update to the ground pack brings several new things. Here is a screenshot of examples: 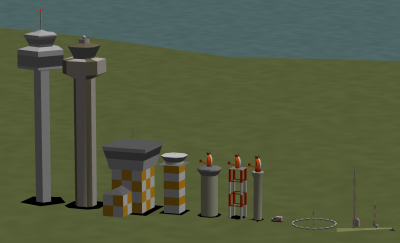 Love it! Awesome redemption on these ground objects Patrick

Soon I will use them to my fictitious sceneries.
Top

I have added a new update to the pack, the Elite Carrier, a floating airport and resort hotel. 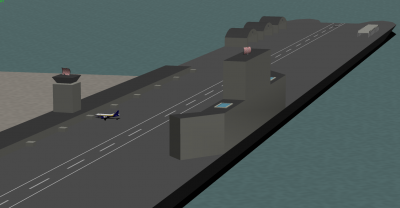 Who need an hotel near Copacabana? Move to the PMNV's Elite Carrier

PS: I will be able to refuel?
Top

Lucas1997 wrote:Who need an hotel near Copacabana? Move to the PMNV's Elite Carrier

PS: I will be able to refuel?

Refuel and rearm. The military facilities at the front of the ship is for security, defense, and search and rescue operations.

Patrick31337 wrote:I have added a new update to the pack, the Elite Carrier, a floating airport and resort hotel.

The deck has integrated LED light panels down each side and for the touchdown markings.

I'm thinking of adding this to the next CMI Extended update if it's fine with you Pat. I mean since there's the only one production unit right now

The Airrier is already in there, why not add this right?
Hi! I make average, undesirable, boring grey maps for YS Flight!

5,000 per hour?! Sweet! Man at that rate, they'll not just cover every ocean but every square mile of every ocean

Is this carrier already in one of the maps?
Top

The carrier is now available in my California map, and will be showing up on my server in various places.

I just updated my ground objects pack again with a new, improved version of the carrier. I extended the military runway area and added a ramp to aid in takeoffs. I also added a few extra markings and raised the radar dish on top of the hotel by five feet. I raised the F9 viewpoint to get it above the radar dish on the tower. There is also a "bridge" near the military hangars.

If you don't want to download the entire ground pack, just download this .zip file with just the new carrier files:

elitecarrierupdate.zip
Just the carrier files, only install if you already have the November 20th pack but not the update from today.
(19.31 KiB) Downloaded 1764 times

I just updated the ground objects with an enlarged ambulance (realistic size) and a new fire station.

I added another ground object, the TACAN unit, which operates as a VOR-DME with a range of about 200 miles. This is needed for the Waddington and Central Lincolnshire maps.

I found that few objects (Tree Forest, etc.) use "splitted" DNM (with linked external SRF's), that not work on older versions of YSFlight under Linux. Support for "splitted" DNM was added only in ver20170517test!

Please, do not use "splitted" DNM in your pack, and fix this issue by merging external SRF's dirrectly with DNM's.

P.S.: I hope that in nearest future next stable release of YSFlight will could work with "splitted" DNM's on all supported platforms, but while it work only in test versions, its better do not use such feature in such majour things as PMNVGround Pack.
/!\ READ YSFLIGHT HANDBOOK (online + PDF) | updated 2019/04/25

This is bad, because I thought I had fixed those.

I will look at them and make the corrections as soon as possible.