Due to unforeseen circumstances, the team was unable to open this year's banquet up to the general public and community. Although this is unfortunate, we assure you that we tried our best to make this possible. Regardless, I felt it was only right to briefly highlight some of the most notable points during the event. 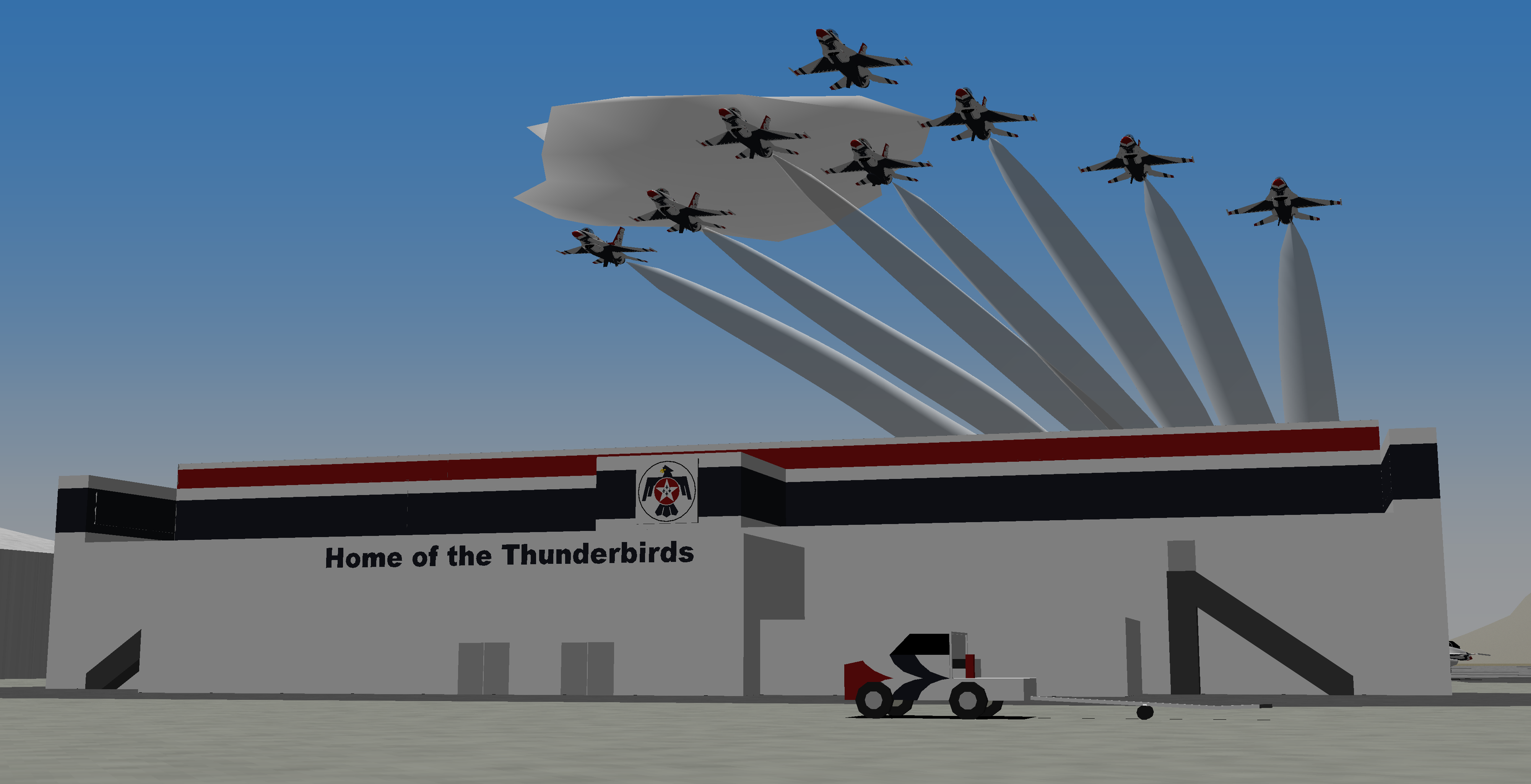 Without a doubt, this was a season for the books. After painstakingly working to resurrect the team after a near-permanent hiatus, it only got tougher from there. It was my honor to have been, sort of, "forced into" the role of the commander after it was decided that Kujo would not return for the 2019 season after flying with the team for countless years previously. Although this year would be my second season with the team and I had a fair amount of confidence going into it, the learning curve felt like Mt. Everest. After only a handful of familiarization flights with Kujo, I was overwhelmed and in shock of what being the commander meant. To put it frankly, 99% of people will never understand what all goes into leading the demo. Between the communications, timing, keeping smooth maneuvers, remembering maneuver parameters, there's a lot more than flying up and down. Besides that, I often had to cover the role of the ground support officers as lack of trained individuals put me in a position to not only act as ATC, but to cue and work audio WHILE performing all the other aforementioned tasks. Nonetheless, it worked out. I'm not attempting to brag by listing all my accomplishments, but rather reminding you that seemingly impossible jobs can absolutely be done given the right amount of determination and dedication. Even on a 20 year old video game. 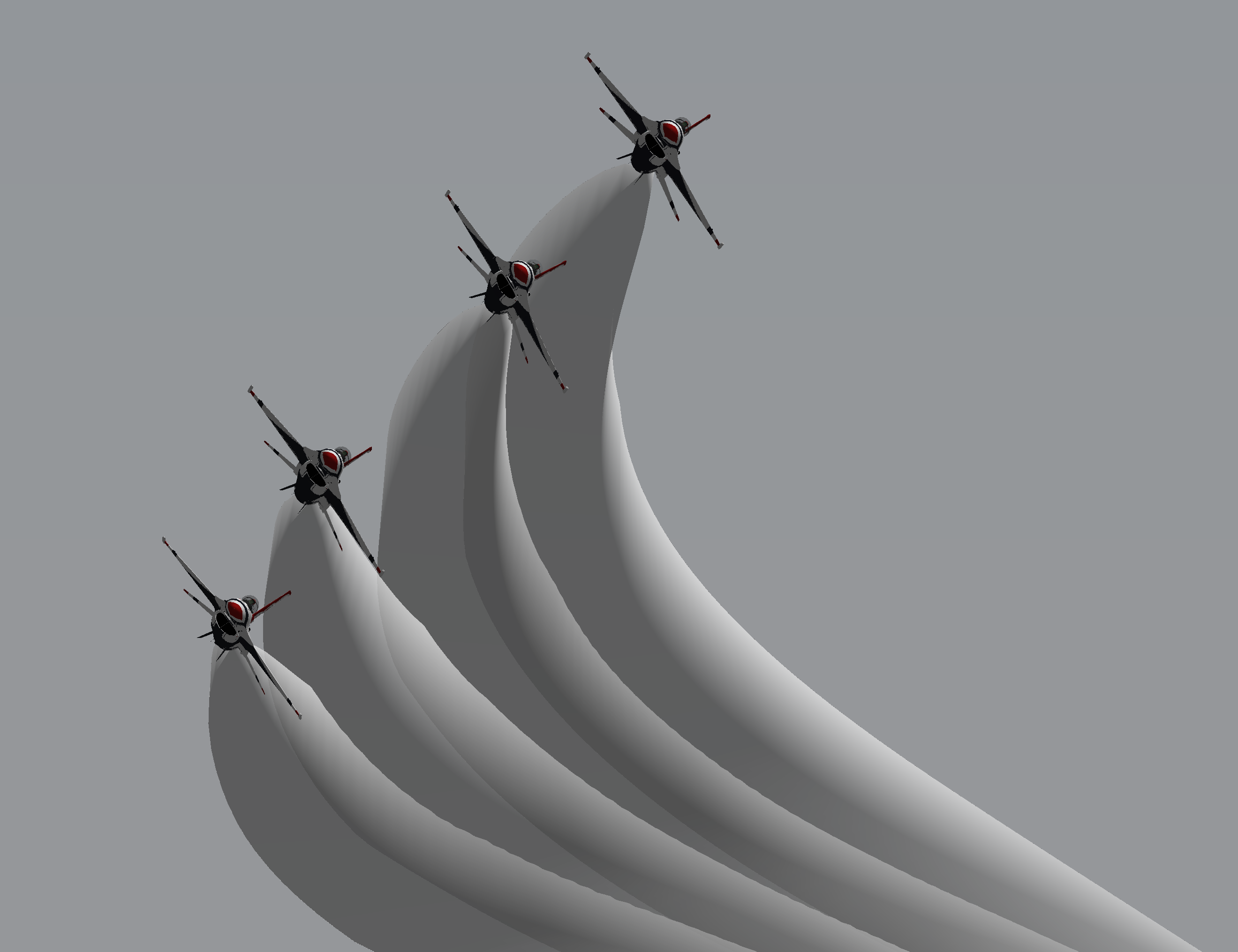 I cannot express the amount of stress and pressure was happening behind the scenes during December of 2018 and January of 2019. While some former members returned to fly at the Wings Over Illinois Airshow, it wasn't all smooth sailing. With just a few weeks of practice and nearly daily practices for a few weeks to accommodate schedules, having a new leader, myself, and a new lead solo, Buster, was far from ideal. Although there was much more to it, I'll keep the rest for another time. But before I move on, I'd like to give one more thanks to Kujo for his support and help. Not only has he helped me learn, but he's also forced me to learn on my own which I believe was an important step in the change of command process. Very few know this, but we had planned to fly a 4-ship (3 diamond, 1 solo) at the Illinois show. But literally less than 30 minutes before showtime, Kujo stepped in and helped fill a diamond spot flawlessly. You'd never know it, but he was flying fresh off a 6+ month break. 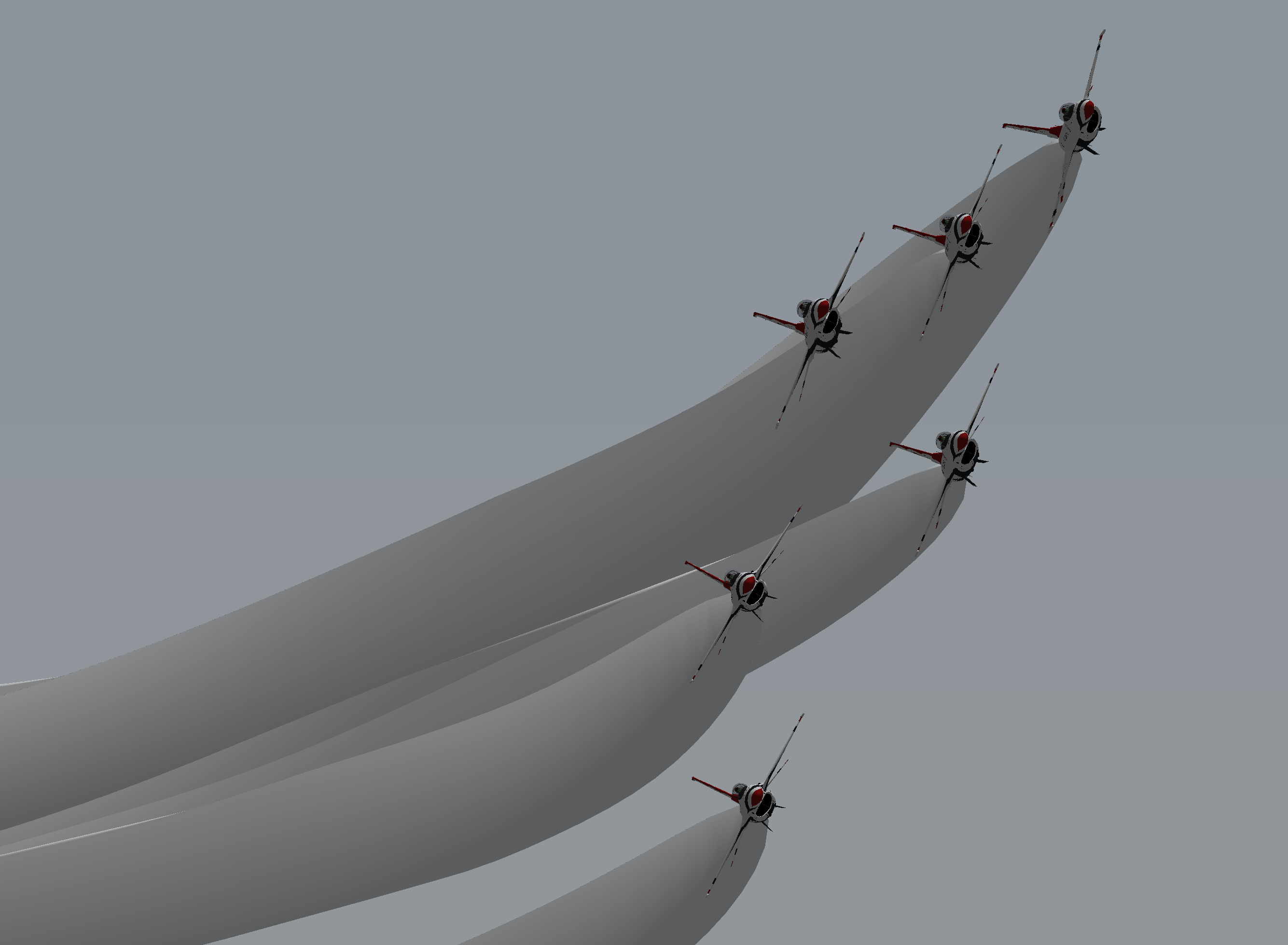 Now, one for the boys. The guys who flew on the team throughout the past year are some of my closest friends and some of the coolest guys I've ever met. I'm sure they know how appreciative I am of them, so I'll keep it short. We never did get that D-DL-OT.

Fortunately, most of the season after January was smooth sailing and not as eventful. Once again, I'm glad I've been given the opportunity to help lead this team and look forward to leading it for many years to come. With that being said, I'd like to announce that we'll be once again flying roughly 5 or 6 shows in the 2020 season. Although it is all subject to change, we currently plan on kicking off the season between February and March with the return of the YS Indian Springs Open House Airshow. Following that will be the return of the Indy Air Fest. Our main summer show is still undecided, but we hope to do some 'traveling

' in the months before and after the said event. To wrap up the season, we'll once again host the Aviation Nation show in November. 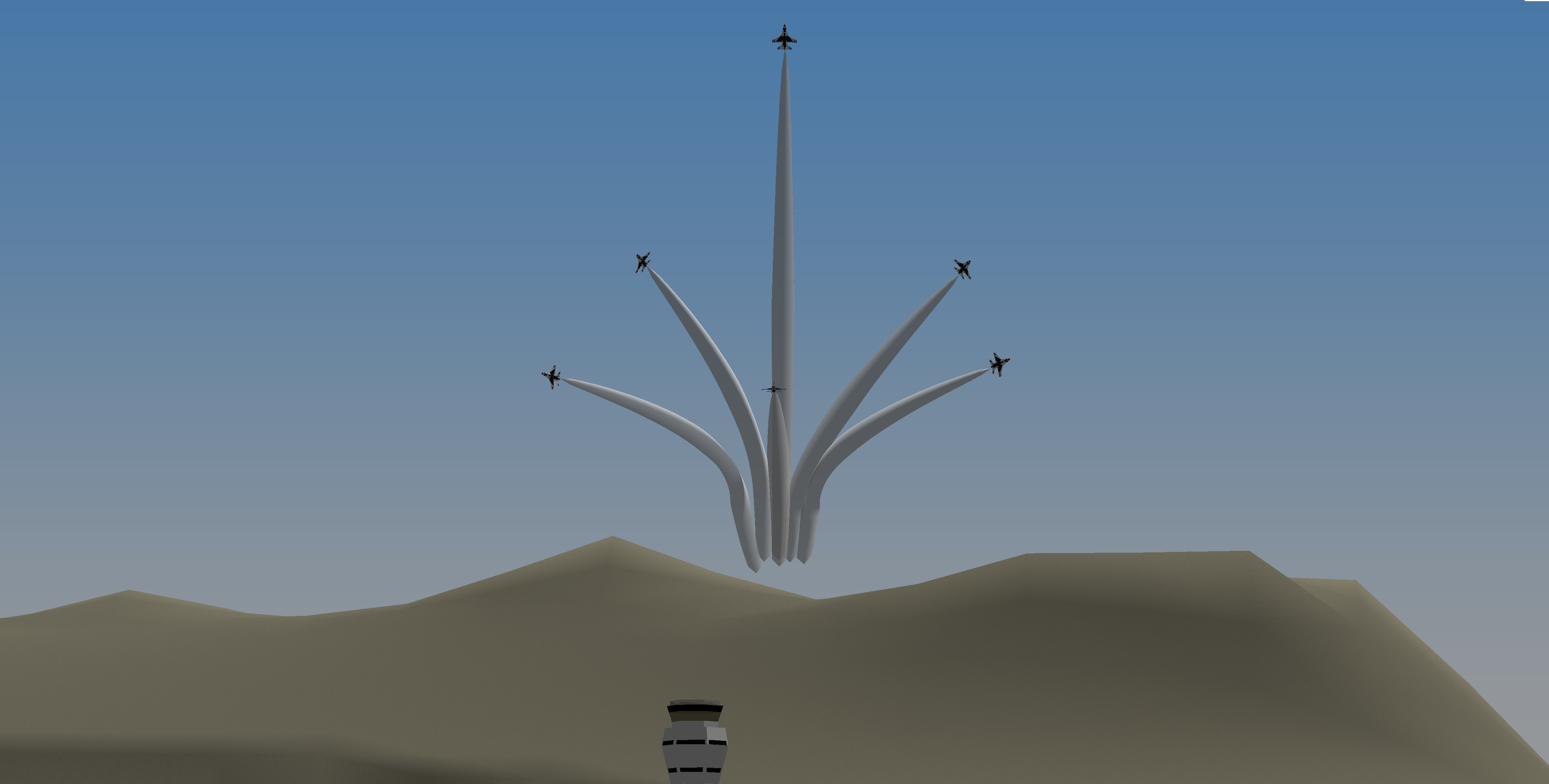 Starting off with a HUGE thanks to Hornet, I'd like to announce the newest edition of the YSFlight Thunderbirds jets. Although unfortunately these will not be made public, we ensure the newly added detail and complexity will increase viewing pleasure.

Here's a shortlist of some of the cool bells and whistles that have been added. 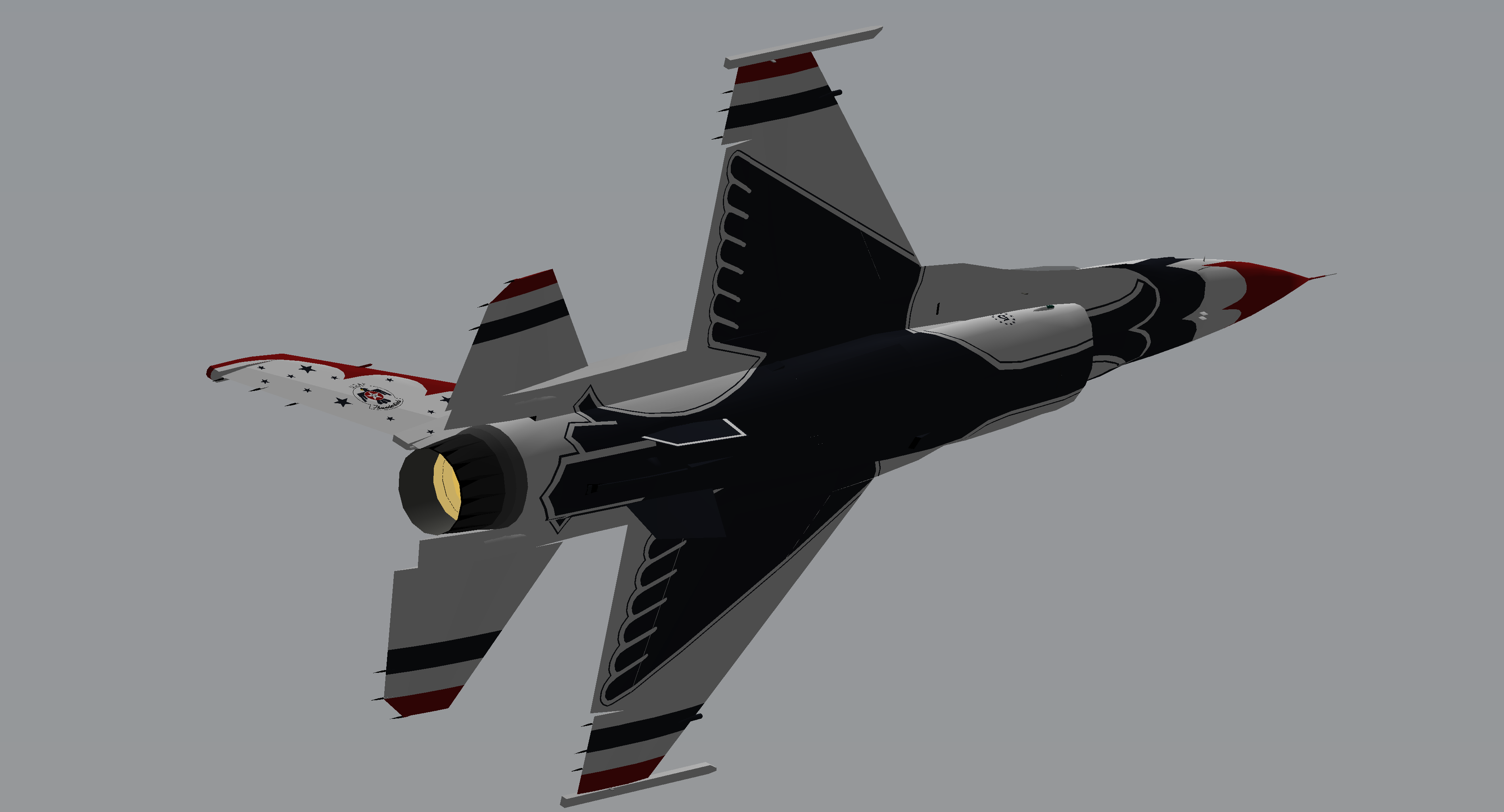 Here are the results from the community-voted YSAC awards. Once again, big thanks to all performances and congratulations to those who have been chosen. Although we will not disclose exact voting numbers, we ask for your trust that these numbers have been untampered.

This award was an easy decision. After the YSAC board met to decide who would receive this reward, we decided on Hornet. Hornet, a South Korean native in an english-speaking community, is by far one of the most talented, kind, and respectable members of the entire YSFlight community. Not only did Hornet help create COUNTLESS aircraft and fix bugs for various pilots throughout the season (for completely free!), but he also held his own as a performer as well. From debuting performances such as the T-50A solo at Rockford to bringing out the B-29 "FiFi" for the first time, Hornet is one of the most well-rounded pilots we know. Most notably, Hornet is the demonstration pilot for his signature Super Hornet Demonstration Team. This team is a mix between a recreation of the real-world U.S. Navy Super Hornet teams with his own personal flair. Aside from flying and modding, Hornet is by far one of the nicest members the community has to offer. He's reliable, friendly, and always open to community members. The YSAC team would like to thank Hornet for his contributions throughout the year.


Feel free to leave your thoughts, comments, favorite memories, and more on the thread below!

Well, Indy said feel free to leave something on the thread but no one did. So I will do.

Talk about my YS Aerobatics. I was started an aerobatic with the YSBE in 2015.
At that time I performed No.4 Slot. That was my first experience of the aerobatic. Before then, I was always playing combat jets.
So, we participated in the VNAF Airfest 2015 and I saw several solo demos from there.
I was so impressed with the YS Zeus F-16 demo by Kilo 11 and interested in the solo demos.
In 2016, the YSBE has little bit changed and my position was changed into No.7 Solo.
We also join the VNAF Airfest 2016 and I also participated as the pilot of the F/A-18F demo.
And my friend, one of the YSBE member, also join with me as F4U Solo demo and heritage flight.
(I loved it but I didn't do any heritage flight in the next XD)
That was my first solo demo in public.
At the time, I was introduced as a pilot, but because my aircraft was the F/A-18F, Venom was introduced as he is in the rear seat.
When I read the chat in flight, people were shouting Venom's name.

Those are my favorite time of the YSFS and from now on.

I am so proud for receiving the YSFlight Airshow Council Legacy Award even though it is just like the employee of the year.

Nothing is given to me, but I am happy that my countless efforts are recognized to have this honor.

Next year, as all Korean members did it, I also going to serve to my country (but not the Military).
Maybe it will be hard to join the YSFS airshows but hope to see you in next year's airshow!

well done to all people that was enter and not. well done to Hornet. i hope 2020 more better then last year