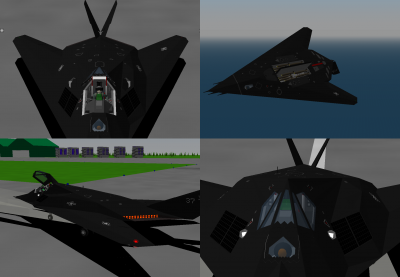 Center of the model is on main gear.

Radar on HUD witch isn't limited by FLIR/DLIR max angles of view.It's fully 3D as it
is in original F5 model.

Has segmented and pitch-roll-yaw animated breathing hose which is activated when
gear doors go up(CLA 17).

There are two cockpits - modern one with lcd displays (MFD) and legacy one which is
based on pictures from F-117 Wikipedia (LGC). 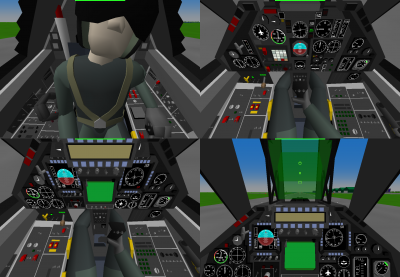 Has pilotless versions of models(NOPLT) with different cockpit point of view.

Please use bombs in /misc provided with this mod,so they can fit properly in bomb
bay.They are standart MK81 MK82.

Performance settings in DAT file are from different internet sources.

Maneuvable and landing speed are higher then most planes:

F-117 has huge drag due to it's facetated surfaces so you will lose speed faster
when turning.Therefore cruising and landing throttle settings are high (REFTCRUS 0.8
REFTHRLD 0.8).You will stall a lot if you are not carefull.Make shure that you have
enough altitude for stall recovering.

Not shure if post stall maneuver data is correct.

Spoiler effect in .dat file is set to 0.0 because this aeroplane is one big airbrake
itself ,and there is no any information on internet about F117 airbrake.

Everything else is original work.Give credit to In Revolt!

JFTR, You may add "WPNSHAPE" variables into DAT-files to use custom weapon shapes per each aircraft without overriding stock weapons:

Yes, I know about that option , but there is some kind of frame drop (-10fps) everytime when
using WPNSHAPE with custom weapons. Especially when bombs number is huge.
Maybe it's just my old computer ,but it seems that weapons in /misc are loaded and drawn faster.
Top

Since it's a stealth aircraft, I'd release it with no lights, that way it'll be stealthier when computer generated in offline play and online when the other player forgets to turn the lights off. Also, I believe it carries only two guided bombs. I don't think it was ever intended to carry dumb bombs. Other than that, the cockpit looks amazing. Too bad they don't use this jet anymore.
Peer reviews: blacktea_64: Strike's the most frustrated YSF user in history. Premachr: Strike's our in-house male Karen. Resists re-education. Oldpro: It's futile. Insane_aviator: in talks to swap usernames. bee_424: He sent me pics of hair he's pulled off his head. Disturbing.
Top

As you know ,YSF don't have guided bombs

.The two main hardpoints can have pilon expanders. Can carry everything that fits in bomb bay . Number of bombs here are based on 4000lb (2tons) of payload .So it have ability to carry 16 (250lb) or 8 (500lb) bombs or mix of them. Overall it's pretty realistic setup.
Top

Honestly, this is a fantastic job! There's a wonderful attention to detail in improving the admittedly bland TMP model.