So, I've been playing this space... game for a few months now and I'm somewhat addicted.

Right now, it's in Alpha, they've recently gone to 0.10, but it already has an entire globe to fly around, a fairly decent physics system and a very modder-friendly file system.
Basically; you build a rocket, then you fly it.
There are no goals right now for players (that's to come far later when they get the physics and world done, adding other heavenly bodies) but thanks to a decent abundance of user made parts, there's tons of things to try.

This was the vehicle that I first managed to land horizontally in. Since then it's become quite easy to land without retro thrusters and I've since learnt better techniques for landing gear placement, wing placement, etc.
What's say we start up a private little spaceship repository?
Build a vehicle, if it's good, save it in the game (typing in a relevant name for it before pressing the save button) then upload the spaceship file (from the spaceship folder in the KSP main directory) to this thread.
Per Ardua Ad Astra
>>> Dragon Addon Pack <<<
(PAK-FA, F/A-52, F/A-36, MQ-21)
Top

THEY HAVE A MAC VERSION

Hahahahaha. If enough people get in on this we could have ourselves a pretty epic page here.
Top

Cobbling together explosives, throwing them into the sky, and seeing how long it takes for them to come down and in how many pieces.
Top

Youtube commentors say orbiting is hard. I did it on my fifth flight, second rocket.
Actual UltraViolet

Not tried orbiting, but managed to get a pretty successful rocket on my 4th try. First was an utter disaster, too big, too bendy, not enough thrust.

My first non-tutorial flight was suborbital and got me on the other side of the ocean. My second flight in my second rocket I went too fast and was too impatient to see if I would wind up actually orbiting. Before my third flight, I looked up speed/altitude tables for orbit and got it with my second rocket design. Since then, I've just been shoving more and more boosters and fuel cells underneath the command module as I can.
Top

I have jetisonable nose fins...

Looks like another orbiter flight sim copy to me.I love it when you press speed up simulation button and up from saturn to earth in 5 seconds.
Top 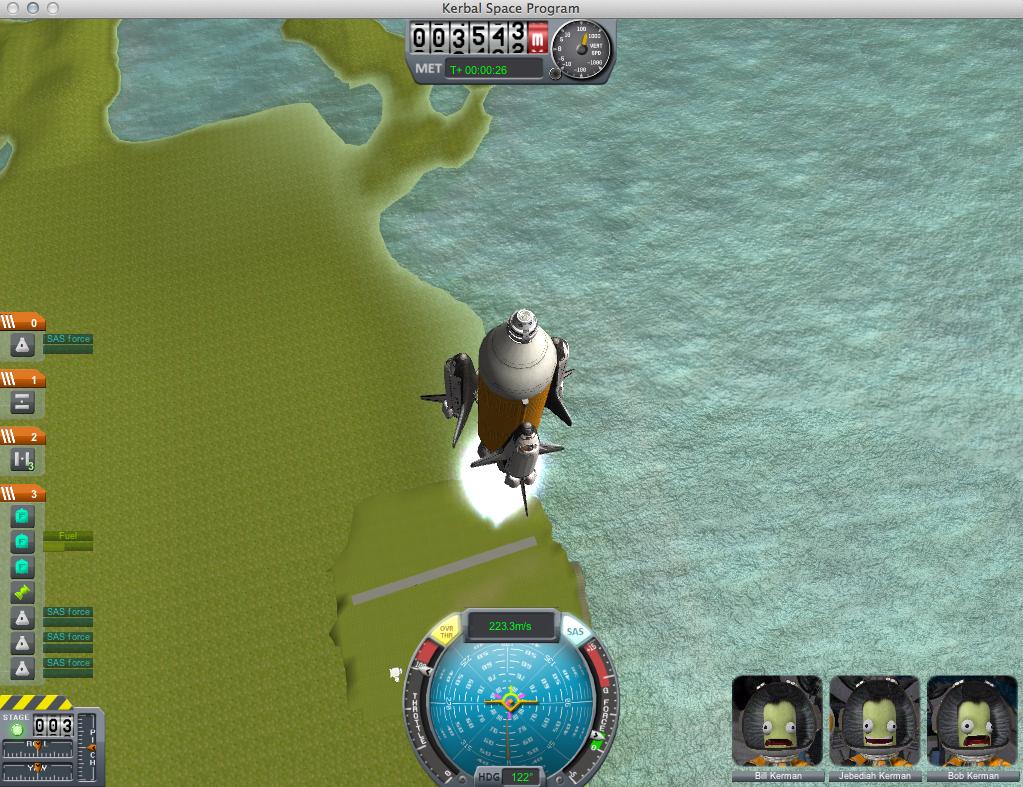 Step your game up, NASA! 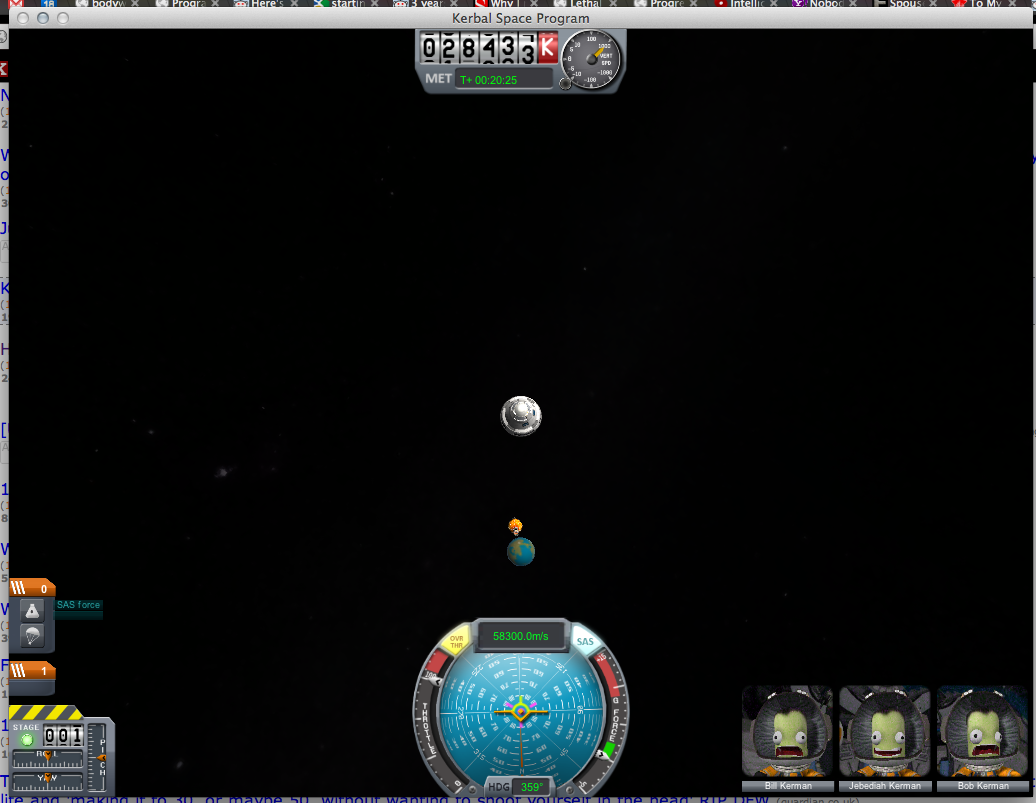 Fuck you, NASA. I'm better at moon rockets than you are. Granted, I didn't include any mission modules. 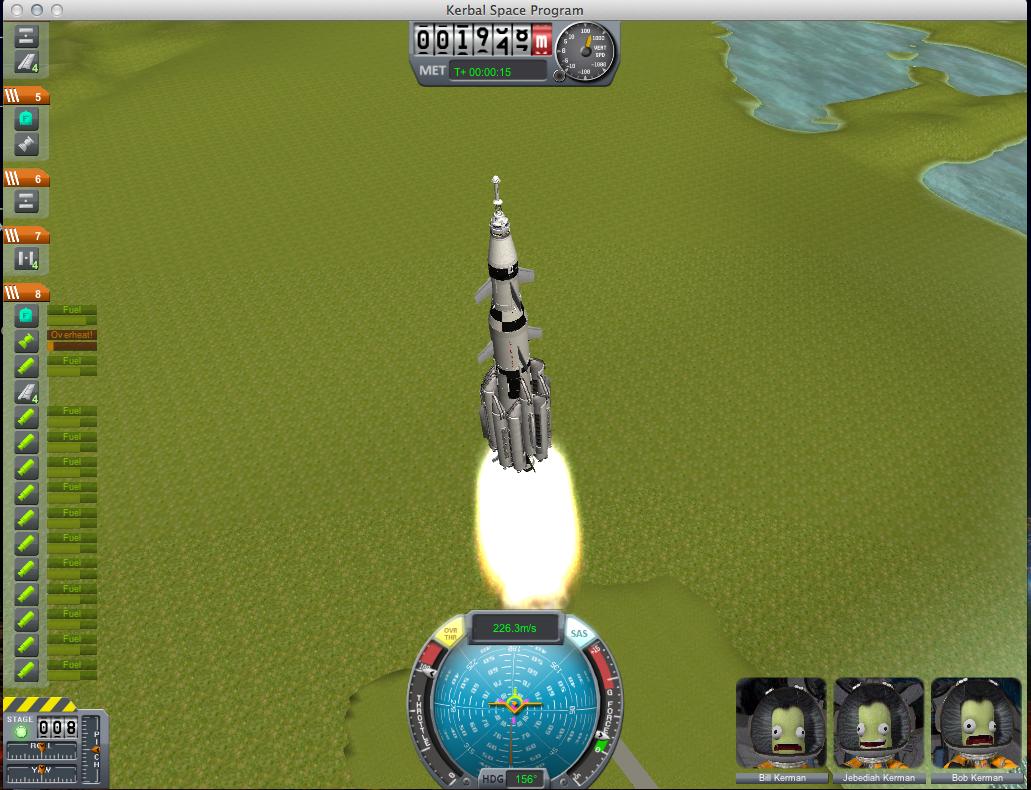 I tried it yesterday and believe me.

It took out my addiction from Minecraft.

I got into orbit quickly its fun.

How do you take a screenshot in this thing?

Print Screen, paste in paint, save.

sorry for bumping an old topic, but there is talk of a moon.

by talk I mean you can go there!
Top

Yeah. Was reading about it on their boards. I don't have the patience to build the right size rocket to do it, then sit there as I adjust my trajectory for a few hours.
Top

Yeah you can fly to the moon now on an experimental release version.

I've landed a few vehicles on the moon, often while breaking off a landing leg or two in the process (I am only touching down at like 3-5m/s

I also made a rocket for flying into the sun.

I technically made it, reaching a velocity (via the Sun's gravity) of something like 22,000m/s, but it turns out they haven't put an actual model of the sun in yet.