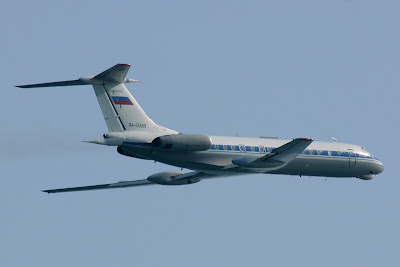 It is a shame we have none as yet. Note there are large numbes of Variants, and that it would be worth having the entire Tu-134 set, thank you.
Top

ok guys I'll give my reasoning behind why I am asking for this.

Its just that on YS, you can get almost every single commercial plane produced by the western hemisphere, from VC-10s to 747s/ But we have absolutely nothing, bar one Tu-154 by GAC, to represent commercial aviation the other side of the iron curtain, so perhaps it would be an idea to expand this to ask for all soviet built airliners.

There is a wealth of civil aviation that has been completely ignored, and I think it would be better that this is corrected.
Top

well the gacrp pack has a few soviet civilian airliners and /viewtopic.php?f=31&t=523
Top

ok, but we need really good quality ones.

It would be a shame not to.
Top

i agree phoenix, there aren't enough soviet/russian airliners, the tu-134, il-86 and -96 would be good additions
Top

there are several tupolev in owl airliners

can you link them please?
Top

sounds good. I wonder why the VAs dont use soviet aircraft.
Top

Shall I answer? Soviet aircraft have a bad reputation by most western guys. Plus they are old...
Top

Real world airlines don't use soviet era aircraft because of their high noise levels and the poor fuel efficiency of their engines, even aeroflots current fleet is pretty much all airbus and boeing aircraft. But VAs don't pay for the fuel they use so its not a problem and who's complaining about noise levels! The Tu-204 actually uses modern Rolls-Royce RB211s. I think more VAs should use more russian planes because in my opinion they're all too much alike, they've all got the same fleet of aircraft, I know that this reflects real life fleets, except concorde/vc-10/dc-3. Every VA operates a 757, a320, and a emb190, a380, b777, b787, which is the ideal modern airliner fleet. I would however much prefer a VA had an all russian fleet such as il-86 or-96 (replaces 747, a380 and any other widebody), il-62 (replace vc-10), tu-154 (replace 757), tu-134 (replace a320), yak-42 (replace emb190), an-24 (replace dash-8) and keep the dc-3, but call it a li-2 to be authentic. Most of those planes don't exist on ysflight, but a little variety in the aircraft used by VAs would be welcome. Just look at the airliners in OWLs pack, use a AVRO RJ or an a330.
Top

The advantage of a VA over their real-life counter part is the absence of real life political/economical/environmental concerns. Why limit yourself to the same-old same-old when you can be unique? I'd love to see a VA that operates only prop-jobs, no jets. Super Connie anyone?

as important a plane the dc-3 was, its just not as fun as flying a jet. I've flown the dc-3 on the hawaii map a couple of times and I got bored, its just too slow. I did enjoy flying the tu-114 though, which was the largest airliner in the world until the arrival of the 747. Even though it has props it can outpace many modern jets, 550mph!
Top

Anyways, even if you don't like it that much, surely people it would be better to have a wider range of aircraft. There is a major part unexplored!
Top

I find the DC-3 awesome and fun to fly in although in real life I would prefer a tiger moth for just flying around. :{) And yeah I support this Soviet russian airliners for VA's
Top

I see this topic is going nowhere and that it is deviating strongly. Can this be locked, as most of the psots are for the VA section.

Well I'm starting to grasp the concept of model making so I might try to make this plane once I learn.
Top
Post Reply
22 posts