Super-Duper, From where would it be down-loaded? I don't see a link for it and I did not find it under the MAPS section. Thanks.

Finally the work has begun on the project I've always wanted and now I know I can get it done. I've begun work (actually since KMQJ has been in the works for almost a year it started then) on my home state of Indiana. If work goes well, I will include the cities and airports of Louisville, KY and Chicago, IL and maybe even Rockford, IL and Scott AFB, IL since the maps have been completed for those already. Indianapolis Intl. looks as does below and all airports in the Indianapolis area will be completed giving everyone a complete flying area between Chicago and Louisville, KY. This will be great for those who would like to fly for an 30 minutes to an hour from one location to another without looking down only to see blue or green emptiness. I will continue to update but I thought I'd show everyone I haven't been doing nothing for YS just because I've been offline. 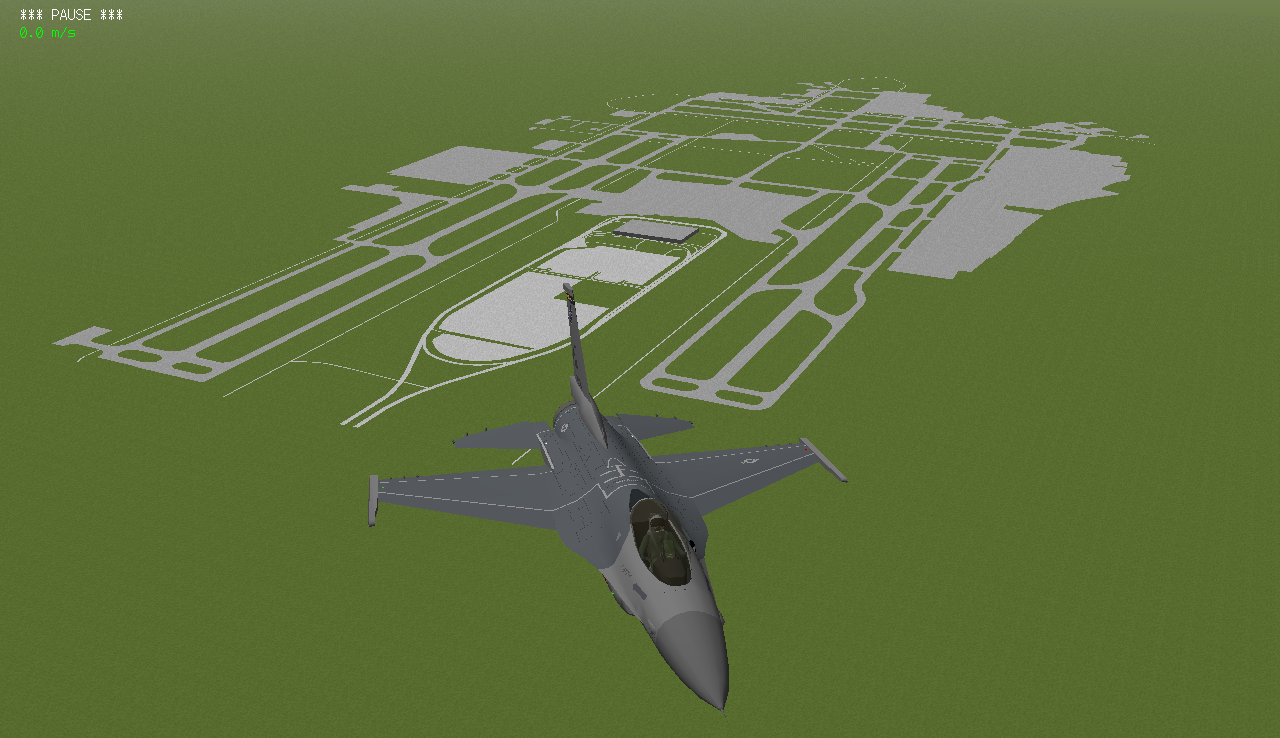 The majority of the Indianapolis International Airport is done. All that is left is to add lights, runways, taxi lines (maybe), elevation grids, some ground objects, and a little more scenery inside and then I will drop it into an already in-progress map of all of the city.
VNAF Aerobatics Commanding Officer and Founder - - - YSAS Member - - - YS Aerobatic Pilot
YS ACC A-10 East Coast Demo Team pilot - - - B-1B Razor Demo Team pilot
VFA-49 GhostHawks Commanding Officer

Looking good VNAF, your maps are always fun to fly on.

Scarecrow will be pleased!

If you want, I can handle the taxiway lines. Or even the runway lines.

The taxiway lines would be awesome! I can do the runways I just am doing the layout first with a runway sized rectangle and will replace it with the real thing later on. I'm just about done with my old neighborhood Eagle Creek Airpark and after that I'll start Greenwood.
VNAF Aerobatics Commanding Officer and Founder - - - YSAS Member - - - YS Aerobatic Pilot
YS ACC A-10 East Coast Demo Team pilot - - - B-1B Razor Demo Team pilot
VFA-49 GhostHawks Commanding Officer

90% done with KEYE and have done a lot of work around the city on some major roads and 80% of the water stuff (lakes, White River, creeks that are visible from the air, etc.). I've also added KMQJ which is done to the map. It's one giant puzzle as I'm making a lot of detailed areas separate and will put them into the map later on. I've also got some accurately measured football, tennis, and baseball fields saved as separate files and may release them in a sports field pack or something after this map is done. So far I'd say the map is approximately 15% done right now. A lot more to go but Louisville doesn't need much extra done to it and so when that is added it will make the map about another 10% done but I need to make Louisville Intl., and some nearby airfields. I've decided that Indiana 1.0 will include Indianapolis and everything south of it to Evansville and Louisville. I've made Chicago to go with 2.0 because there is too much work to do on it atm and I want the map released before then so you'll just have to hold a bit. More to come soon! Feel free to ask questions.
VNAF Aerobatics Commanding Officer and Founder - - - YSAS Member - - - YS Aerobatic Pilot
YS ACC A-10 East Coast Demo Team pilot - - - B-1B Razor Demo Team pilot
VFA-49 GhostHawks Commanding Officer

A project unreleased and actually unannounced (to remain that way for a bit). Today Waspe has made more of a contribution than I think he realizes and for that I thought I'd have the courtesy to at least give you all something to talk about. Please do speculate this picture because it reveals quite a bit about what this map is going to be for however there are still many more surprises in store. Waspe, your contribution has completely changed the way this area looks and I'm going to really have to upscale this area to help make it interesting. 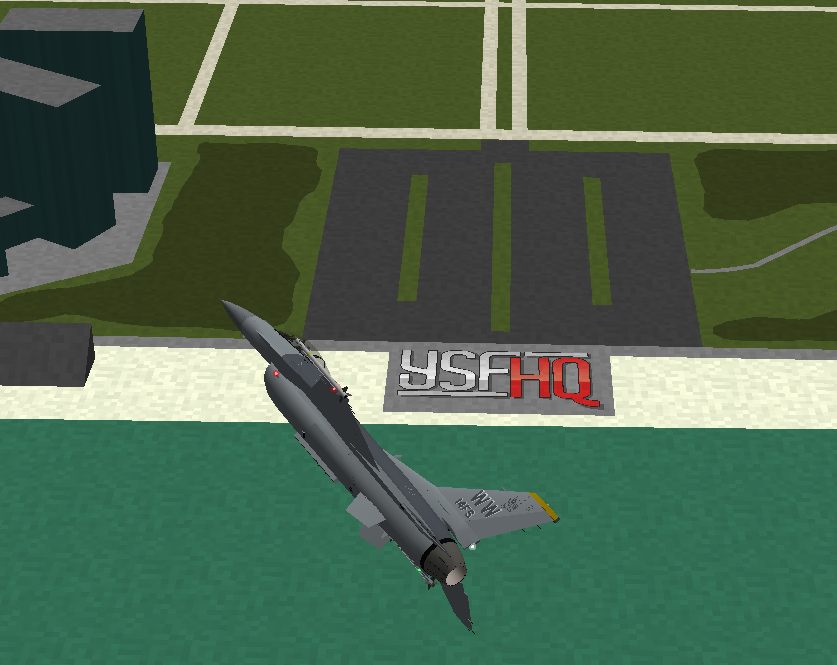 What would be the interest in me creating a map of Everett Paine Field, WA. If you don't know, that is the location where Boeing produces its main line of aircraft such as 747-8's, 787's, 777-ER's, etc. I feel like if I made this map, some repainters and Boeing fans would love to use it especially as a background for repainting or modeling Boeing aircraft. I know I would like it but I need support of the community to push my work along on it. Please let me know what you all think and whether doing the map could be beneficial to the community.
VNAF Aerobatics Commanding Officer and Founder - - - YSAS Member - - - YS Aerobatic Pilot
YS ACC A-10 East Coast Demo Team pilot - - - B-1B Razor Demo Team pilot
VFA-49 GhostHawks Commanding Officer

Well, just having the airport would be a little bit of a let-down when one knows that both Mt. Ranier
and the Canadian border would be within view at less than 1.000 ft of altitude. Beautiful country,
and a great opportunity to attempt to re-create it. And it would, I think, be the first time any part of
the Canadian countryside would have been done for YSFlight.
How's that sound for encouragement?

NavyGator wrote:And it would, I think, be the first time any part of
the Canadian countryside would have been done for YSFlight.


Anyways, I think it would be great if you made the airport. All of your work has looked stunning so far, and an airfield like this deserves it.

It would have had I not had my head up my ass and realized where Cold Lake was located.
For some reason I was thinking of the USMC cold-weather training area in Nevada.

Your scenerys are of such good quality and detail that what ever you decide to do will be a welcome addition to our community VNAF.Even if it was located in East bumm f--k nowhere.So keep on keepin on bud.

Haha thanks guys. I'll move it up the wish list. Next project it is and I'll have to see about expanding it for the surrounding scenery. I tend to get very carried away so I may just do the airport at first and expand later. That's what happened with my East Virginia map. I got carried away and wanted to expand more and more and more and eventually moved on to something else.

Expect to see a lot of progress from me now. Just got out of school (Class of 2012 woop!) and have some free time on my hands. Have been hopping around with my work and done a bit of everything. Indianapolis map, Island (Vuelo Beach), and Everett map are getting my attention now. I can never really have just one project at a time so I will do a lot on all of them. I think Everett is the smaller of the three so I'd expect that one first. Actually just now starting it but in the mood to work so I'll get a lot done today.
VNAF Aerobatics Commanding Officer and Founder - - - YSAS Member - - - YS Aerobatic Pilot
YS ACC A-10 East Coast Demo Team pilot - - - B-1B Razor Demo Team pilot
VFA-49 GhostHawks Commanding Officer

Well, I guess Everett is on hold (ya I know) but I'm working on some other good stuff. In the works right now, Nellis AFB (may/may not include more of N. Las Vegas), 10 sq mi area around Indy Regional to be joined with Indianapolis, and a major expansion of the Vuelo Beach map (soon to get a name).

Below is how Nellis looks now. 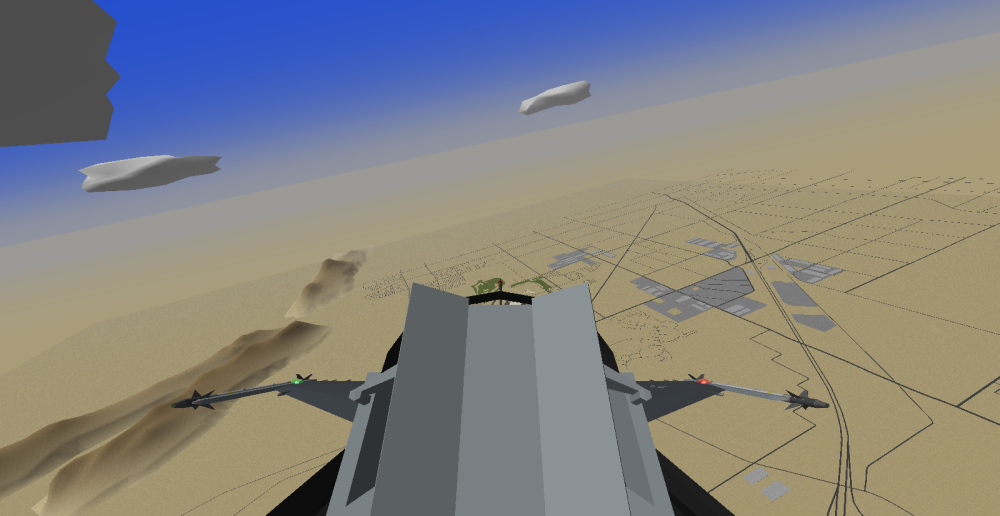 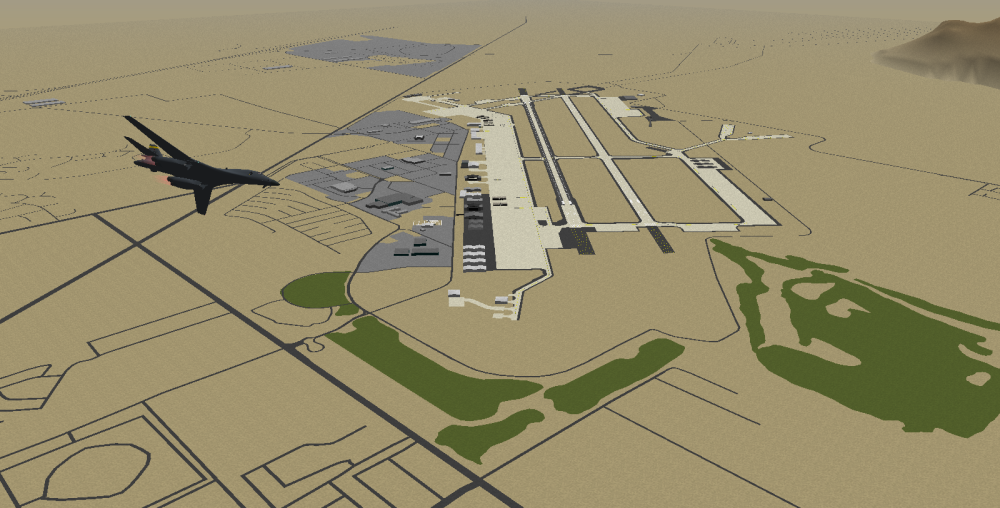 The extra work put in around Indy Regional. Note the in-progress areas around the ones that have been released in the beta version. In the next release, you can expect to at least have a rectangular area around the airport to fly around instead of blocks. 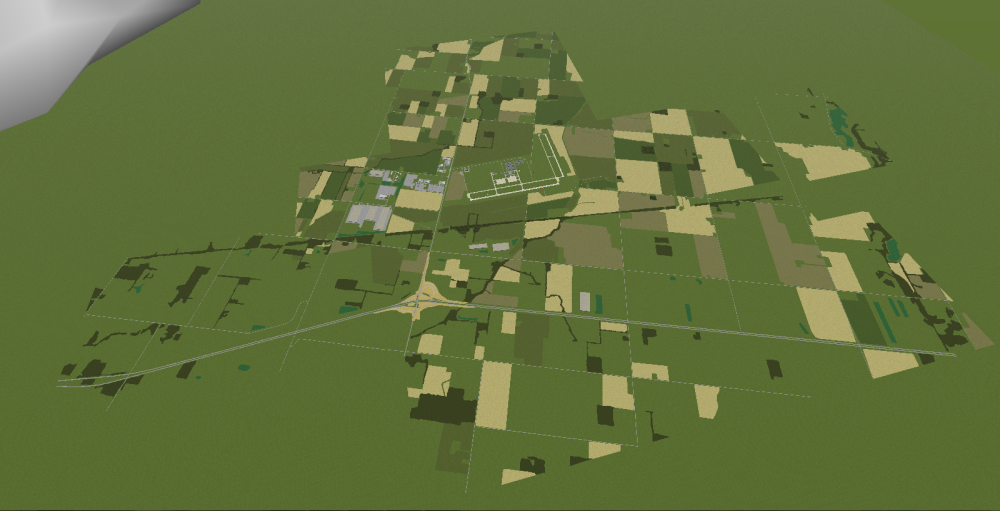 Joint-Base Kortana is still getting a lot of attention. This map will still take a lot of work before releasing but when it comes out, it will be a joy to fly around offline if one wishes. Thinking about making an online map to give a bit more choice besides Hawaii. The Canary Islands is a good example of what I'm going for but of course, fictional. 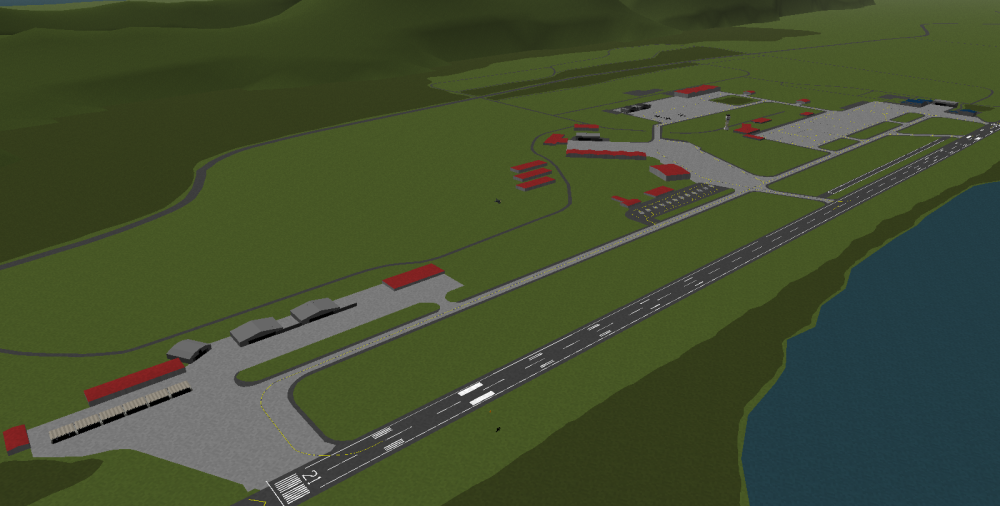 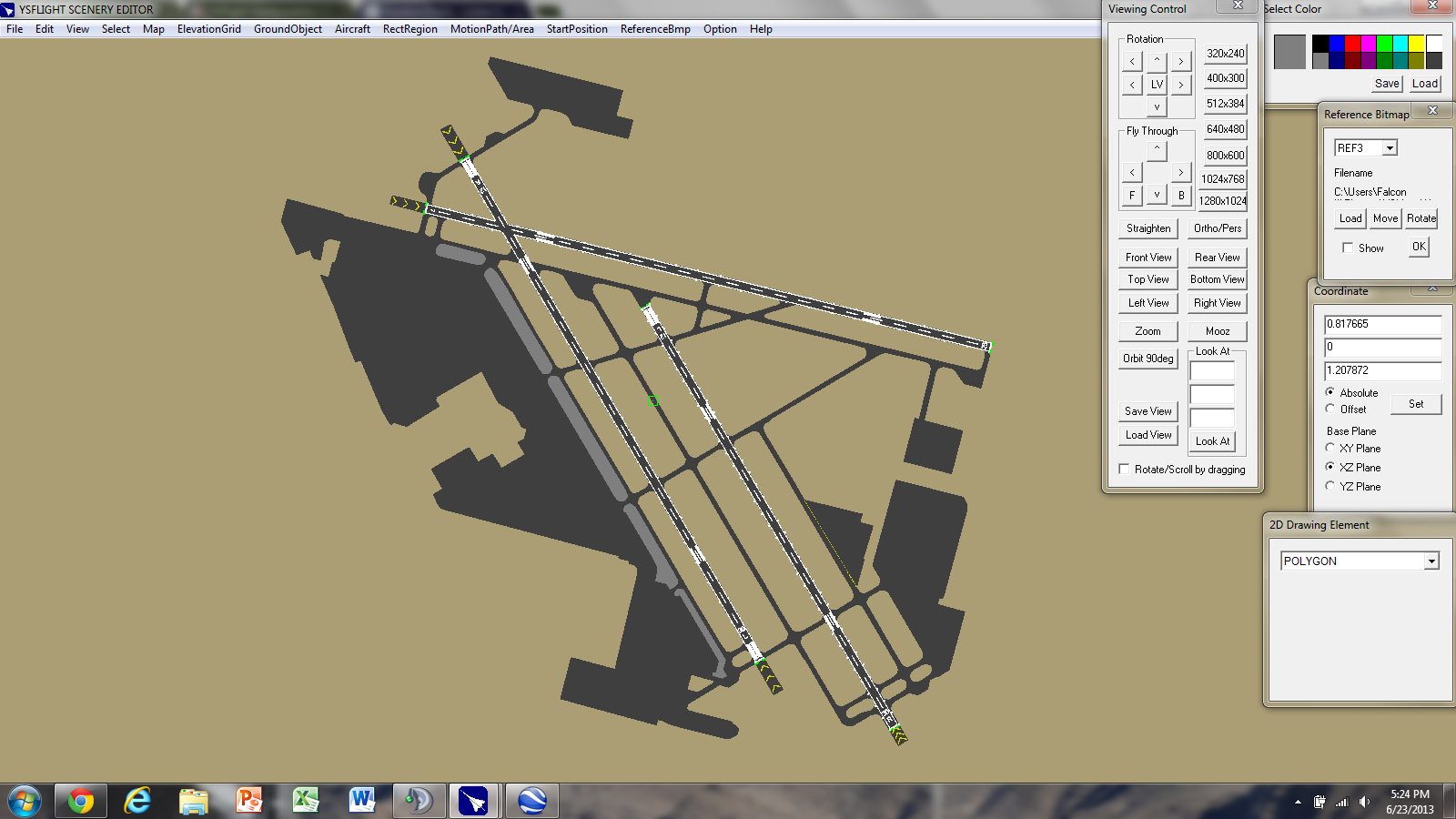 Very great job on the Nellis AFB map! Looks exactly identical from the last time I was there. Runways, mountains, and ground objects are exactly the same! Woo!
Top