The project has a design maximum weight of about 650 tonnes, a payload of about 300 tonnes, the main deck while featuring a 12-abreast triple aisle configuration while the upper deck featuring a 9-abreast layout with two aisles and is intended to be capable of carrying 860 to 1000 passengers. Entry is facilitated either through conventional fuselage doors or forward and aft ventral escalators. The wing design incorporates winglets and a fold outboard of the outer engine.[3] For comparison the Antonov An-225 has a maximum weight of 600 tonnes and a payload is 250 tonnes. A 1/24 scale model was shown[4][5][6] at the 1999 Paris Air Show.[7] If built the aircraft would have been the world's largest airliner.[8]
The concept for the aircraft began in the 1990s with a forecast program cost of US$10 billion (early published figures were US$4-5.5B) and called for the first aircraft to be built before 2000. With an estimated price per unit of about US$160-200 million (an earlier published estimate was US$150M) the market was forecast for a total of 300 aircraft, with production planned for the Kazan Aircraft Production Association facility. Initially designed for the carriage of passengers, later a KR-860T (T stands for Tanker) version was proposed for use as an aerial Liquefied natural gas (LNG) tanker for far-north regions. Taking advantage of the presence of LNG on the aircraft, the design proposed using LNG to fuel the turbines, rather than conventional Jet fuel, like on the Tupolev Tu-206.[9]
The project so far has not proceeded beyond the stage of marketing models.
[edit]Specifications (KR-860)

Here's one of a model: 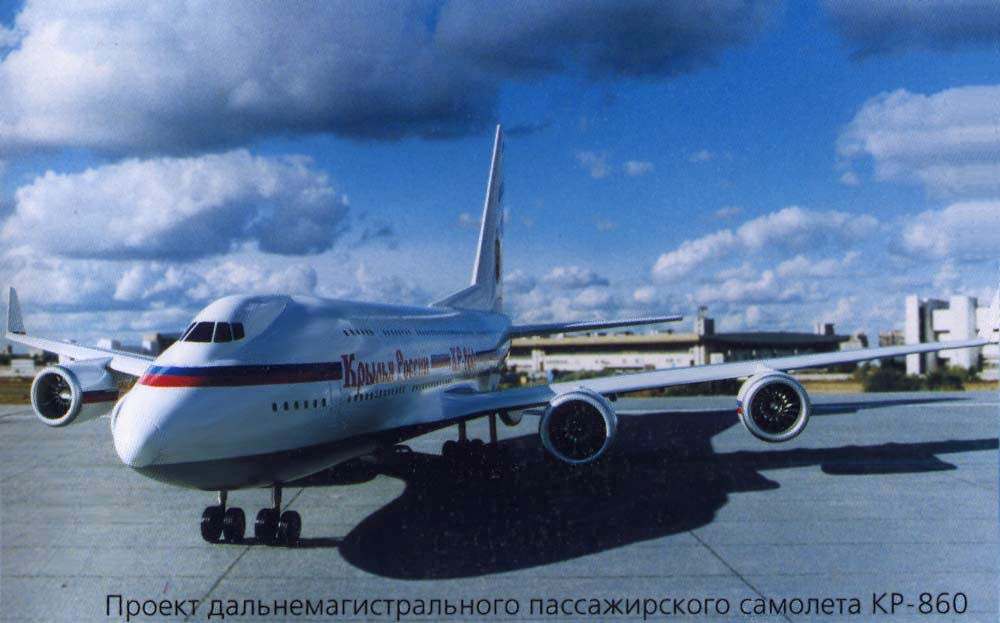 Russia needs everything BIG!
Check out my website YSDecaff for all my tutorials and addon releases.
Visit my GitHub page for Python codes: https://github.com/decaff42?tab=repositories

Looks like the Russian's impression of a 747 if you ask me.
Top

Posts: 1840
Joined: Thu Jun 30, 2011 8:17 pm
Favorite Aircraft: Anything that gets off the ground
Location: From Louisiana, stationed in Alabama
Has thanked: 226 times
Been thanked: 69 times

Kinda looks like the model is older, How old is this design?
Check out my website YSDecaff for all my tutorials and addon releases.
Visit my GitHub page for Python codes: https://github.com/decaff42?tab=repositories

Well according to Wikipedia, that picture of the model you see is from the 1999 Paris airshow where it was put on display. The design was proposed somewhere in the 1990's but it hasn't gone beyond the proposal stage.

I'm not sure if the above information is legit because Wikipedia is Wikipedia.
Top
Post Reply
8 posts • Page 1 of 1