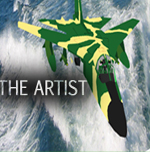 epic job flash can't wait to burn my laptop up

Ok, so fixed a few bugs, and gave the beast her teeth today in the form of 21 thousand pounders

Just a couple of screens to show the loaded bomb bay and the bomb racks on their own when its empty.

That is an amazing level of detail that you only show to people you are about to bomb to kingdom come...

I seriously cannot wait.
Check out my website YSDecaff for all my tutorials and addon releases.
Visit by Bitbucket page for Python codes: https://bitbucket.org/decaff42/

Good news for those fearing lag from this model, the version I'm doing for the post restoration XH558 requires me to remove literally everything in the rear cockpit so the model should end up closer to 6MB than 8...

Apologies for the double post, but there are updates afoot...

As you can see there's a few new ones in there in comparison to my old pack. So far I have 9 aircraft painted up, with 9 left on my to-do list. Hopefully I'll be able to get em released in a couple months or so

Last update. 1 aircraft left to paint. Expect a pack of 22 delta winged beasts tot be released in the near future.

Some mildly significant developments in the last couple months. I have completed and test flown blank DNM's of 3 variants of the English electric Canberra, and have sent them away to a trustworthy colleague to be painted.

In the meantime, project Buccaneer is underway, which in turn will see the production of 3 blank DNM's of significant detail portraying the S.1, S.2A, and S2B variants of the aircraft. Standby for screenshots later on