do the transparent blades as children of the solid blades.

LowspeedProp
-LowspeedPropTransparency
HighspeedProp
-HighspeedPropTransparency
I am an accountant working full-time (and some). I'm not here as often as I would like to be. Send a message if you need me. There are a few people in the community who can get in contact with me urgently if you need - don't be afraid to ask. I just don't check here as frequently as I used to. Sorry!
Top

Got things working in YSF pretty well. Now I have to work on the cockpit. Here's a quick look at the custom yolk. 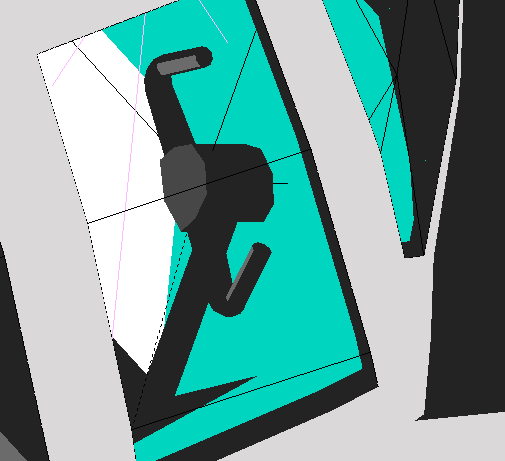 Well, It's been a busy few days, but I'm now that much closer to being done with the bear. I've got the model detail to about where I want it. In the future I may do more, but for now, I like how it is. I needed to do a bit of dat work because the weapons were not coming from the right place and fine-tune the viewpoints.

After that I just have to clean up the file names and stuff and I should be good to go.

Perhaps I'll put a few more decals and numbering, but I'm not sure, I kinda just want to release it. I think this is gonna set a record for start to finish time. 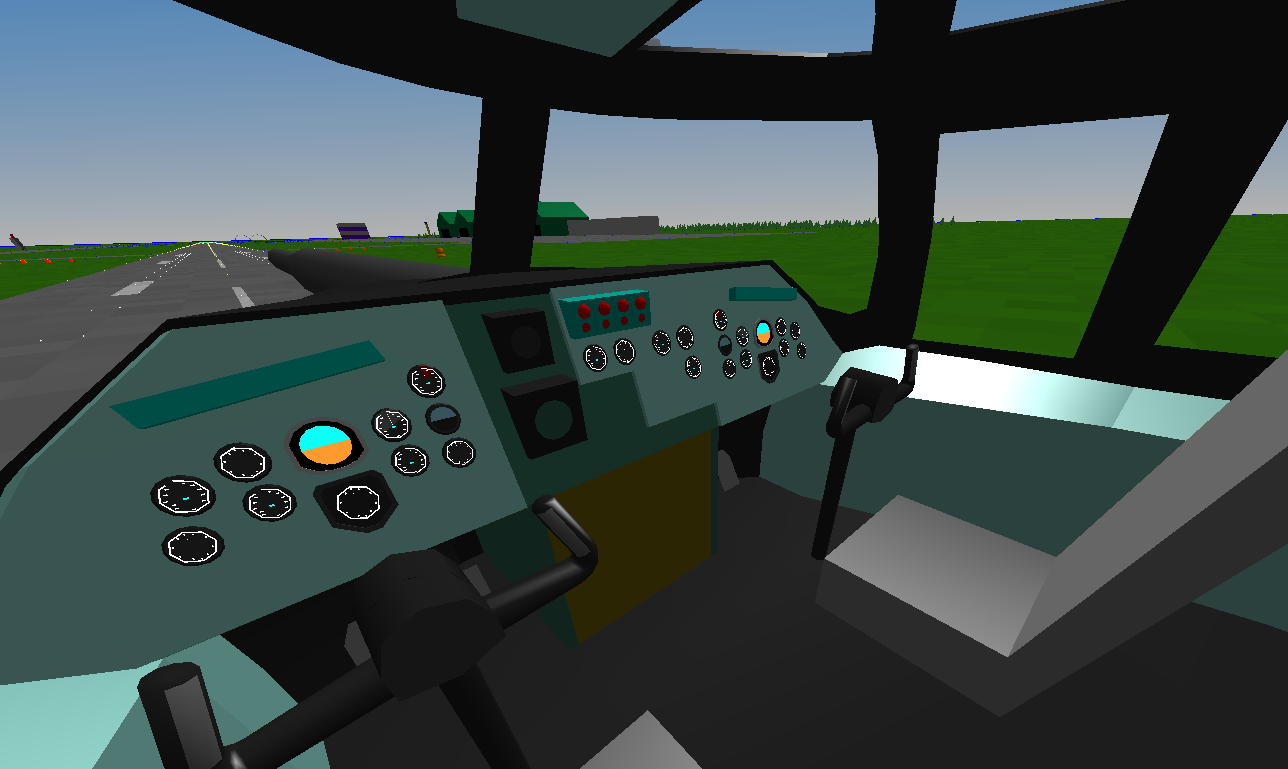 At lease you're not making things look like this anymore...

Lol woooooow.
I am an accountant working full-time (and some). I'm not here as often as I would like to be. Send a message if you need me. There are a few people in the community who can get in contact with me urgently if you need - don't be afraid to ask. I just don't check here as frequently as I used to. Sorry!
Top

Yeah that was from 1.5 years ago? has it been that long? wow. yeah.

It was my first attempt at scratch modeling. Boy have I come a long way since then!

Are you going to add a movable turret at the back as well?
You can make it pilot controlled and with an F2 view point in the back it would be so much fun to blast interceptors away while on autopilot!

Damn. Phantoms all over the Ysflight universe are just [glow=red]itching[/glow] to track down and intercept that Bear. 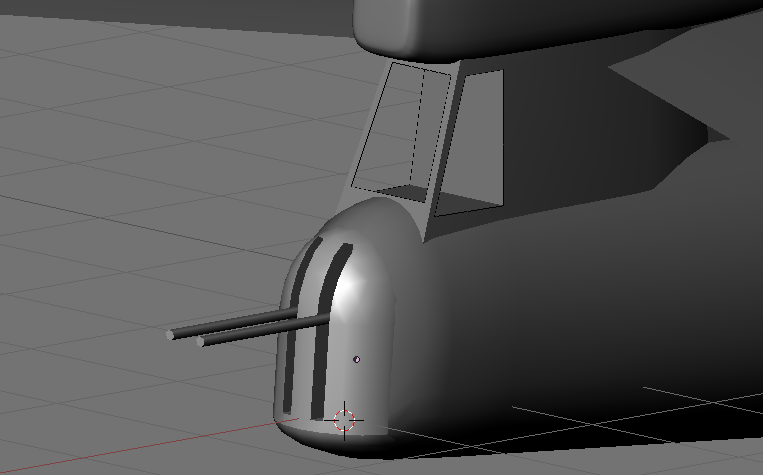 I made this adjustment because I realized it would be silly to come this far and not challenge myself to make the turret...and YSMajor brought it up...

However, this raised the question...how do I animate? You guys all know that I am always looking to how I animate things and how I've learned how important it is to set things up correctly... anywhoo. I look a look at 5 different models and I learned something important. it's not that simple.

The turrets are an interesting thing because they are animations controlled exclusively by the DAT File. Additionally, all the turrets in the example aircraft are just the guns. Any hubs or balls that house them are non-moving. So this got me thinking and I think I found the solution.

Basically even though I only have one turret, I will code two into the dat file. One will be the actual guns with the full range of motion. The other will be the rotating vertical cylindrical housing the guns sit in. However the second turret will only have rotation about the vertical axis.

Any thought on how else to do this? I'm curious. (also these will be player controlled so watch out! 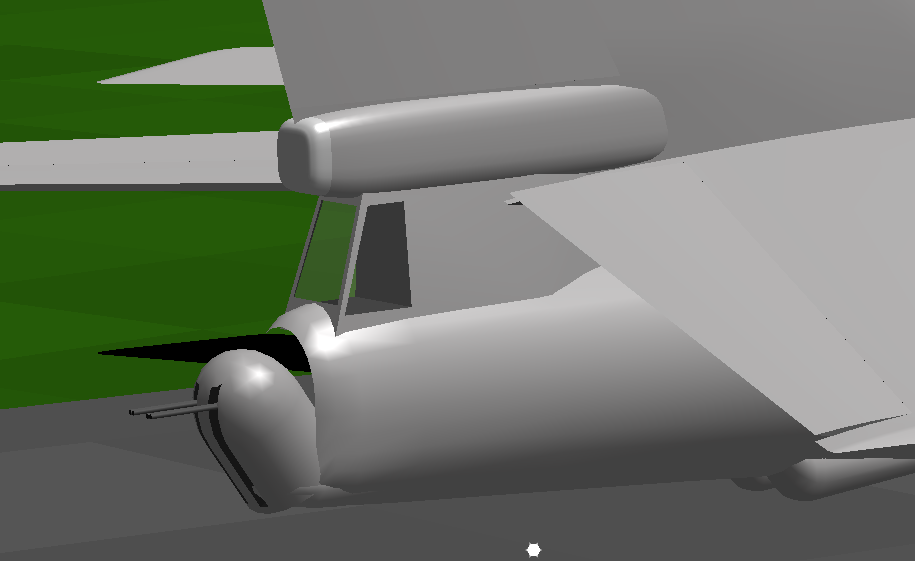 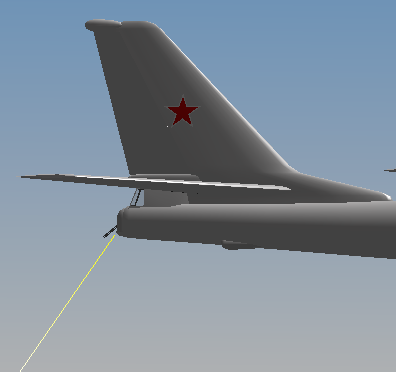 Half way there, but I can't go any further... 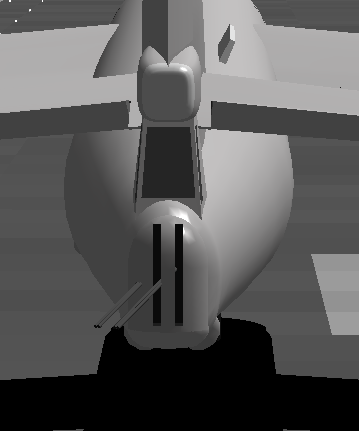 Okay as you can see, there are some fun things here. however things are not going as expected and I'm not sure why. Initially I just had the rotation about the y axis as you can see in the first image. I switched the reference srf names so the correct piece was moving and then because neither was doing the rotation about the vertical axis I simply made both the same. This lead to the fact that the guns moved but the actual turret remained still.

Here's my dat code for the turrets. The first one references the cylindrical rotating part, while the second one is the actual gun barrels.

[glow=red]If you have any ideas, I'm plum out. I can experiment all I like but this isn't going anywhere.[/glow] 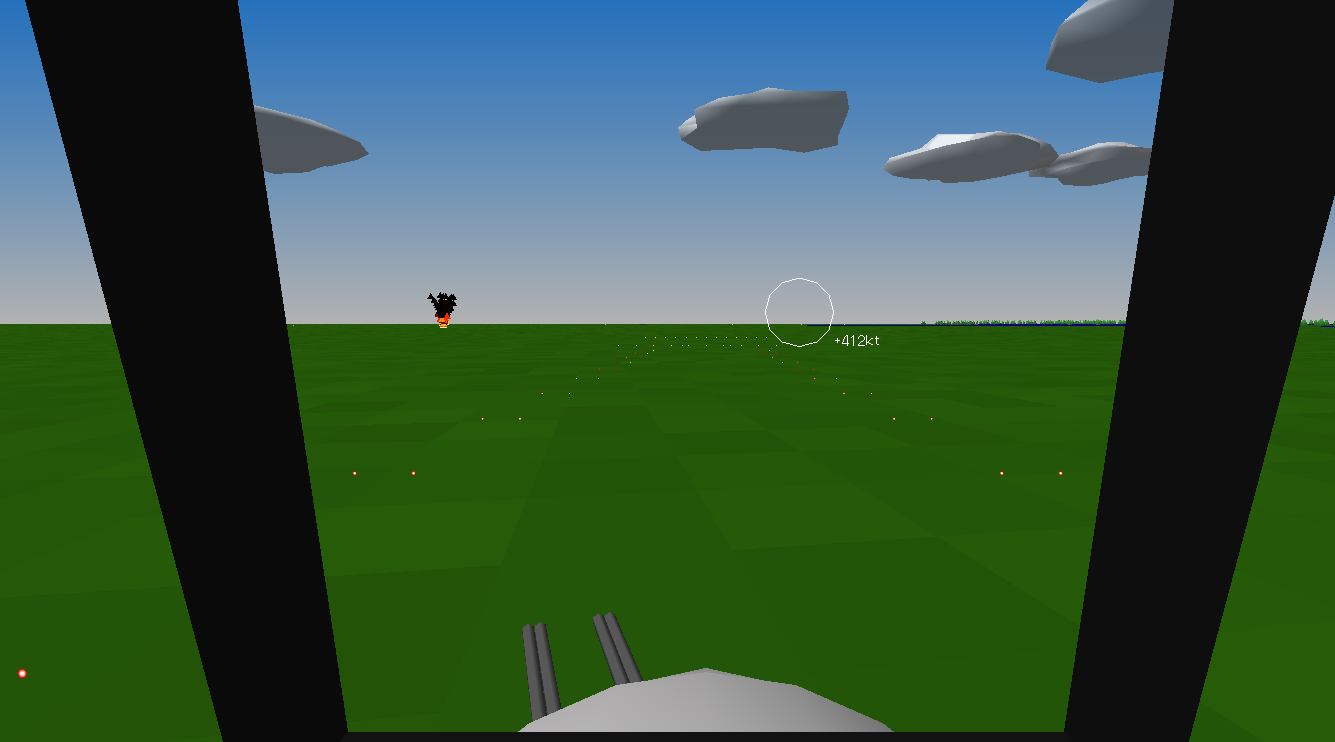 Looking really really good man! I'm usually not a fan of this bird, but your work is changing my mind a little

EDIT: I think that is more correct than it was.

The two srfs have a parent empty located at their center. The empties are used to position them. And the coordinates are used in the dat file.

I nearly ripped apart YSMajor's B-24 PLAAF liberator bomber and found something interesting. It has the same problem that I've got. It has the turret set up to rotate, but it doesn't only the guns do.

Houston we are a Go for aircraft release!

Boy does this really make things work nicely. It was an error in my dat file where I named the srf the base turret was supposed to be instead of a 0 before the name, i had a 1 and it screwed everything up. 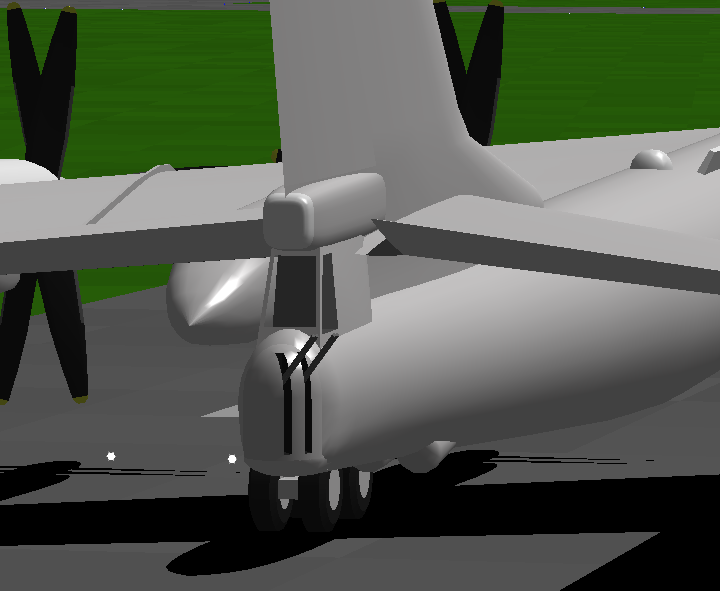 And ITS RELEASED GET IT HERE:
viewtopic.php?f=169&t=6156&p=75085#p75085
Check out my website YSDecaff for all my tutorials and addon releases.
Visit by Bitbucket page for Python codes: https://bitbucket.org/decaff42/

Yes, the turret housing is also a turret in the DAT only with 0 ammo. It will move then on the X plane, but not on the Y-plane. (In the super deformed Loach btw, the co-pilots head is a turret with 0 ammo. It looks at targets when they are in range, which is before the gun starts shooting.)

Then the actual turret guns should be listed before that in the DAT, so it will be your primary PILOT controlled gun, and because they point backwards, you might have to point them forward in the DNM, but swivel them 180 degrees in the DAT setting, so it'll be perfect.
the swivel point must be the exact point in the DAT as well, so that the yellow tracers seem to come from the gun SRF's.

The B-24 was difficult I remember. Didn't have that many issues with the 25 though, or the 17 for that matter.
My AH-1A cobra in the vietnam pack should have an example turret as well.

Well I can't really stay away from a project, even when I probably should....so MORE AIRPLANES!!!

With Skyline coming back to active, we have meshes-galore awaiting work, so if you guys see an old request begging to be answered, or know of an aircraft that we don't have in high detail, then shoot him a PM and see if you can work on one of this meshes.


Well as we all know the GAC 707 is pretty much the only version out there...until now...or rather some-unspecified-date-in-the-future-but-really-who-knows-when.

After much mesh cleanup. I really. Really love the mirror tool. Makes life 10 times easier when working on a wing.

After srf exportation and mesh cleanup. All non-moving parts visible. I'm now adding in the animations.

I'm taking advantage of a feature Skyline built in, which is the main cargo cabin mesh is not connected to the doors. Rather the orientation of the normals allows us to see thru the near wall and only see the far wall. I made sure to resize it so you can't see around it and see thru the airplane if you look at the right angle.

I'm trying to find information on the thrust reversers for the 707 and KC-135. I know the DC-8 has clam-shell thrust reversers, but I've seen some pictures on a 707 suggesting that the reverser looks more like today's nacelle moving.

If you guys can dig up some information about that I would really appreciate that. I'm trying to get the engines all animated before importing them into the rest of the model as they are all 99% identical.
Check out my website YSDecaff for all my tutorials and addon releases.
Visit by Bitbucket page for Python codes: https://bitbucket.org/decaff42/

decaff_42 wrote:I'm taking advantage of a feature Skyline built in, which is the main cargo cabin mesh is not connected to the doors. Rather the orientation of the normals allows us to see thru the near wall and only see the far wall. I made sure to resize it so you can't see around it and see thru the airplane if you look at the right angle.

It looks like the 707's had modern nacelle-moving thrust reversers. See here: http://youtu.be/5dpFLssaSXw?t=1m2s
Am I back? Probably not.
Top

Actually that's a combination of two different types. Notice not only the nacelles moving back, but also forward of those, mechanical doors open inward. I think this is only on the civie models though because according to this source, only the E model KC-135 was equipped with thrust reversers. There are also 2 main types of engines used on the 135's, both completely different.
VNAF Aerobatics Commanding Officer and Founder - - - YSAS Member - - - YS Aerobatic Pilot
YS ACC A-10 East Coast Demo Team pilot - - - B-1B Razor Demo Team pilot
VFA-49 GhostHawks Commanding Officer

Thanks for that. I probably should have mentioned that i was looking more towards the rear half of the nacelles. Interesting point is that your video showed me was the leading edge flaps retracted for the thrust reversers and then re-deployed when the reversers went off. additionally the things at the front of the engines kinda shut off and then opened for reversal. I've got no idea how I'm going to do that animation-wise...

YOur video led me to another: https://www.youtube.com/watch?v=HBFnuaePwLQ

this showed me a KC-135E (i'm pretty sure it's an E b/c it has reversers the A model did not apparently.) THe 135E took old airliner engines and used them as replacements for the aging engines on the 135A's, thus converting a lot to E's.

In this video we can see that the back half of the nacelle moves aft a foot or two as well. So Not a clamshell style reverser.

Thanks for the video! it was a big help and an eye opener.

Well I've been meshing and exporting srfs for a while. bringing them back into blender and prepping them for animation. I've got a long way to go before being done, and I doubt that it will be an easy road. I have some experimentation to do to see if a certain process will work to mirror animations. If this works I will have basically halved by animation time.

Here's a first look at the KC-135X (no engines yet) variant with the boom extended, to test this particular setup. Next I will need to test the landing gear as proof of concept of the shortcut I hope will work.