The vents that open at the front of the nacelles are not for reversal, but to permit more airflow in at lower speeds and varying AoA where airflow doesn't go straight into the intake. Same thing you'll see on the Harrier, Jaguar, Fulcrum, and others.
If you want that animation, I suppose you could link it to the lower end of your throttle.
Last edited by Skyline on Tue Jun 03, 2014 2:27 pm, edited 2 times in total.

That helps soooo much. Thank you. Much easier to do for flight speed, say 200 to 135 kts. I wish there was a throttle animation.
Check out my website YSDecaff for all my tutorials and addon releases.
Visit by Bitbucket page for Python codes: https://bitbucket.org/decaff42/

No prob. If we consider it logically, nobody uses thrust reversers before touchdown, so that footage wasn't a reverser, right?
Here's anther example.
https://www.dropbox.com/s/1f5uafaosfbn1 ... .31.56.png
I guess if you wanted to kinda emulate it, you could animate those vents with the flaps.

Well, not too much progress on the 707/135. Animation woes abound there.

However, I have this little guy that I'd love to pass onto someone to bring it fully to HQP:GAC quality and perhaps make some USMC and RAF schemes for the pack. I blanked the 171st F-35B and did some work on the mesh and copied and modified the panel lines from the F-35C, which I also have in this state if someone would like to work on these. 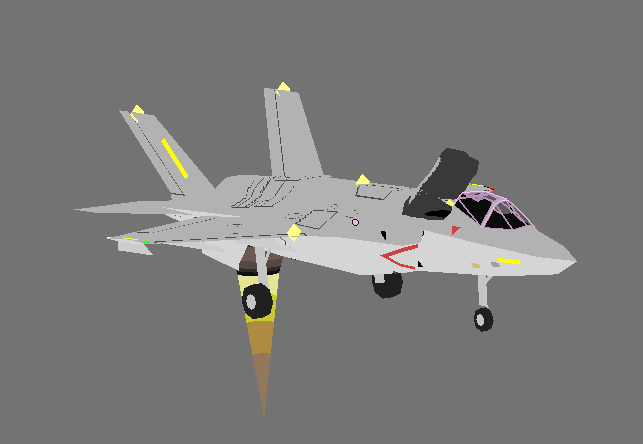 What a difference a few days makes. Right now I have everything but the landing gear animated on the main aircraft. I still have to work the engines and cockpit into the whole thing, but I'm gonna finish the landing gear first before I get to those things.

Hopefully it won't kill YSF to have a huge dnm. What you see below is ~13500 vertices. After working at the engines, those are around 2200 each, and the cockpit before any reductions is around 5000. So all said I'm looking at ~27000 vertices. This probably puts me in the 2-3mb range for the dnm. right now it hovers around 1.1 mb.

Ow, that hurts. Safe to say no online-play with this thing?

When I said 5000 vertices for the cockpit, I was forgetting the center console...add another 4500 vertices plz.
Well that was before some reductions. As it stands now, the cockpit sits at a whopping 7383 vertices w/o pilots or chairs or instruments (which should be in the cockpit file, not the main aircraft).

To put this into perspective, the 727-200 blank model had around 26800 vertices with everything included.

All the outside animations are done. All that is left is to do the cockpit animations (which should be cool, now that I know how the throttles should move when reversers are on) and to finish up the cockpit details. I'm planning on recycling a lot from the 727 to save time and to have lots of detail present.

Here's a shot of the cockpit. Note that the mesh is 100% Skyline's work here. I have only been touching it up and removing extraneous details such as overlapping panels and whatnot. A couple of minor components were removed from the center console for a whopping 2000 vertex reduction. 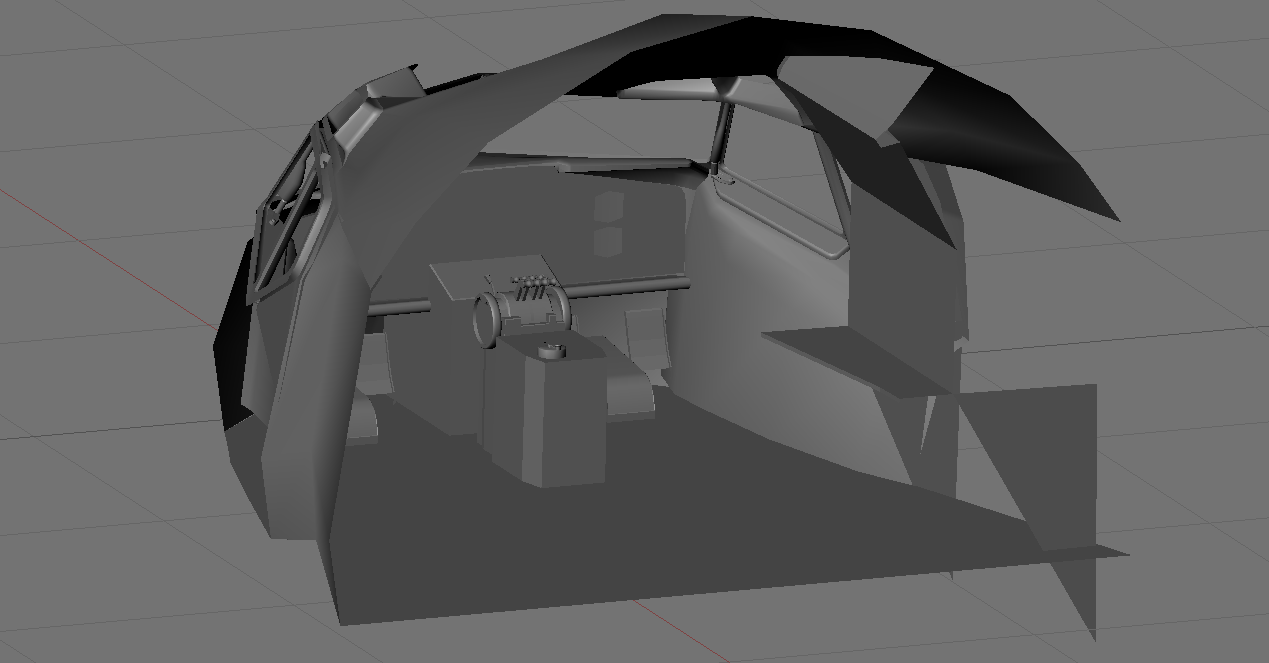 Great job by you and Skyline, that looks awesome

This is outstanding! Great work Decaff!

Dat 707 is looking so sweet, I think I might have just contracted YSDiabeetus.

Can't wait to get my hands on the tanker, it will be SCREENSHOT-PALOOZA!

When I imported Skyline's cockpit into the aircraft, it became apparent that the windows were not properly sized. I therefore discarded them and adopted a simpler window setup, which co-incidentally has fewer vertices and hopefully will be easier to run. 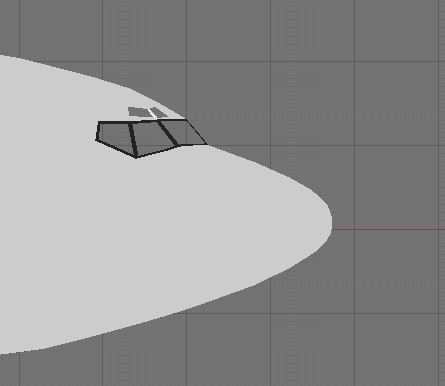 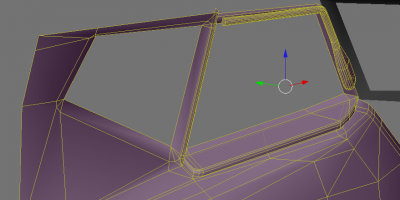 A quick look at the mesh change. Each corner of the windows have approximately a 20 vertex reduction, a 6 percent reduction in the cockpit. I still have to fix the skylights, which should be another couple hundred vertices or 3 percent.


All that aside, I still have to add in the military crew entrance for the -135s under the nose and remove the doors, however many of the civilian and a few AWAC/ELINT aircraft have the passenger doors, and still other civilian aircraft don't have the cargo door. I'm feeling many variants, at least in the form of blanks, if nothing else, in the future.

Well, I guess when things start rolling, I steamroll thru everything. Here's a nearly final look at the cockpit. Like always, the instruments will be the cockpit srf file and the rest will be a part of the aircraft dnm. The instruments are 11800 vertices!! 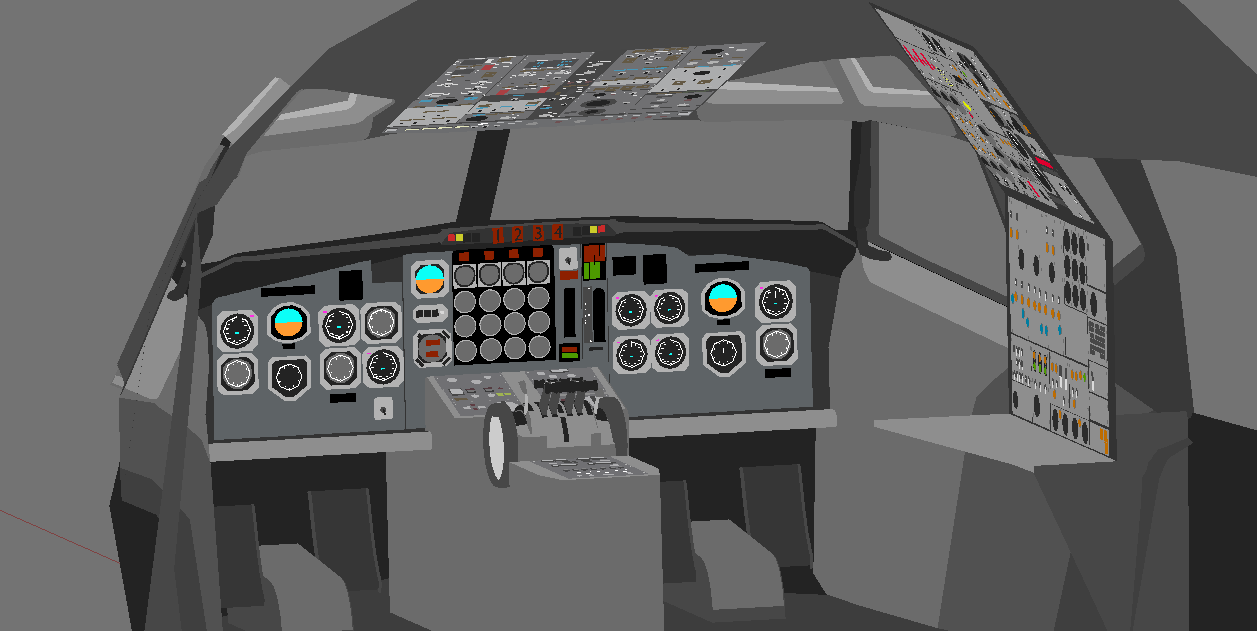 We have flaps and spoiler levers animated, and the throttle control moves with speed, while the thrust reverse levers will move with the reversers! The foot pedals are synced with the rudder. I think this is the most animated cockpit I've setup yet.

Still have to put in the gear lever, but that will take 5 seconds.


Well the cockpit itself is only 5729 vertices, I'm still debating a yolk and seats. What do you guys think???

Okay, so I caved on the seats and controls, fixed a couple animation bugs with the throttle, and now we are ready to go!
...
...
Except I gotta get the fuselage ready first. The way it is right now is geared towards the cargo civilian aircraft. I gotta add in the jump-door below the cockpit for the military variants, and develop a few different fuselages for the various variants I'm going to work on. I'm thinking of doing two packs, a military AWAC, Tanker, ELINT pack and then a civilian pack. 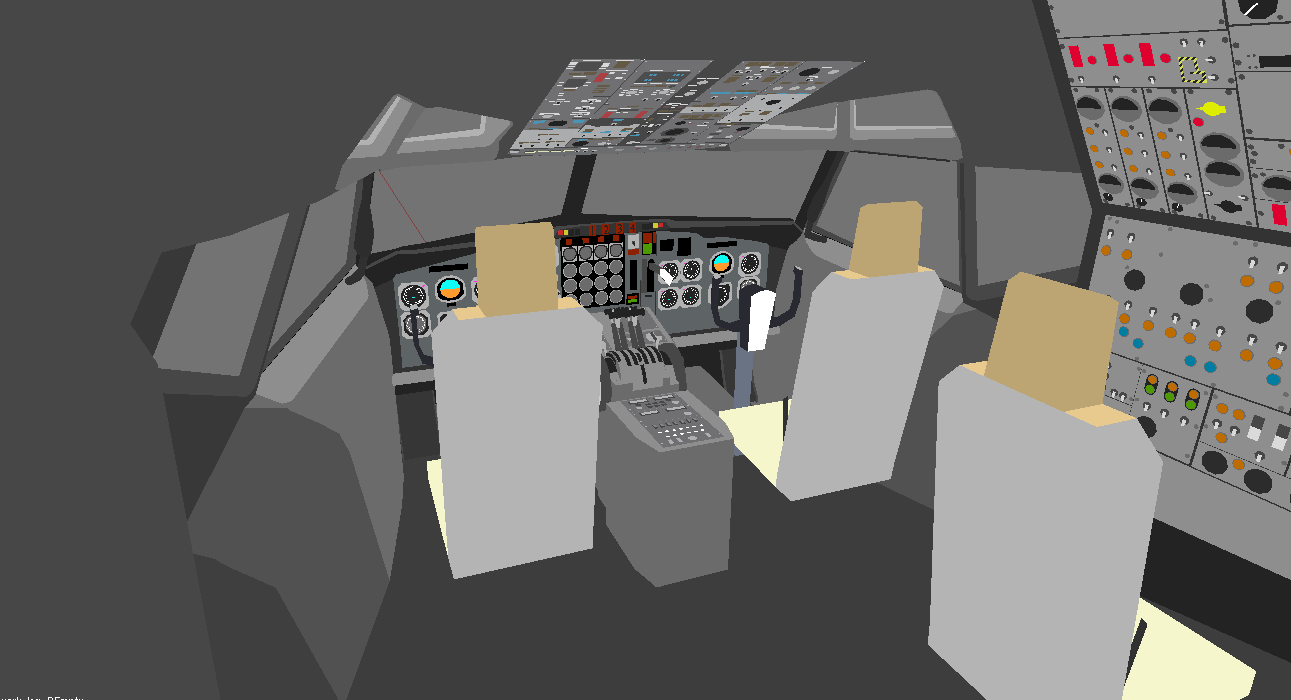 That looks beyond awesome! O.O
The War Room

Nah but seriously thats seome awesome work youre doing there.

Well, I made it into the air!

As you can see I added the door under the cockpit, but I need to fix the ladder that goes up into it. Apparently it is a bit lower than I thought it would be in blender. 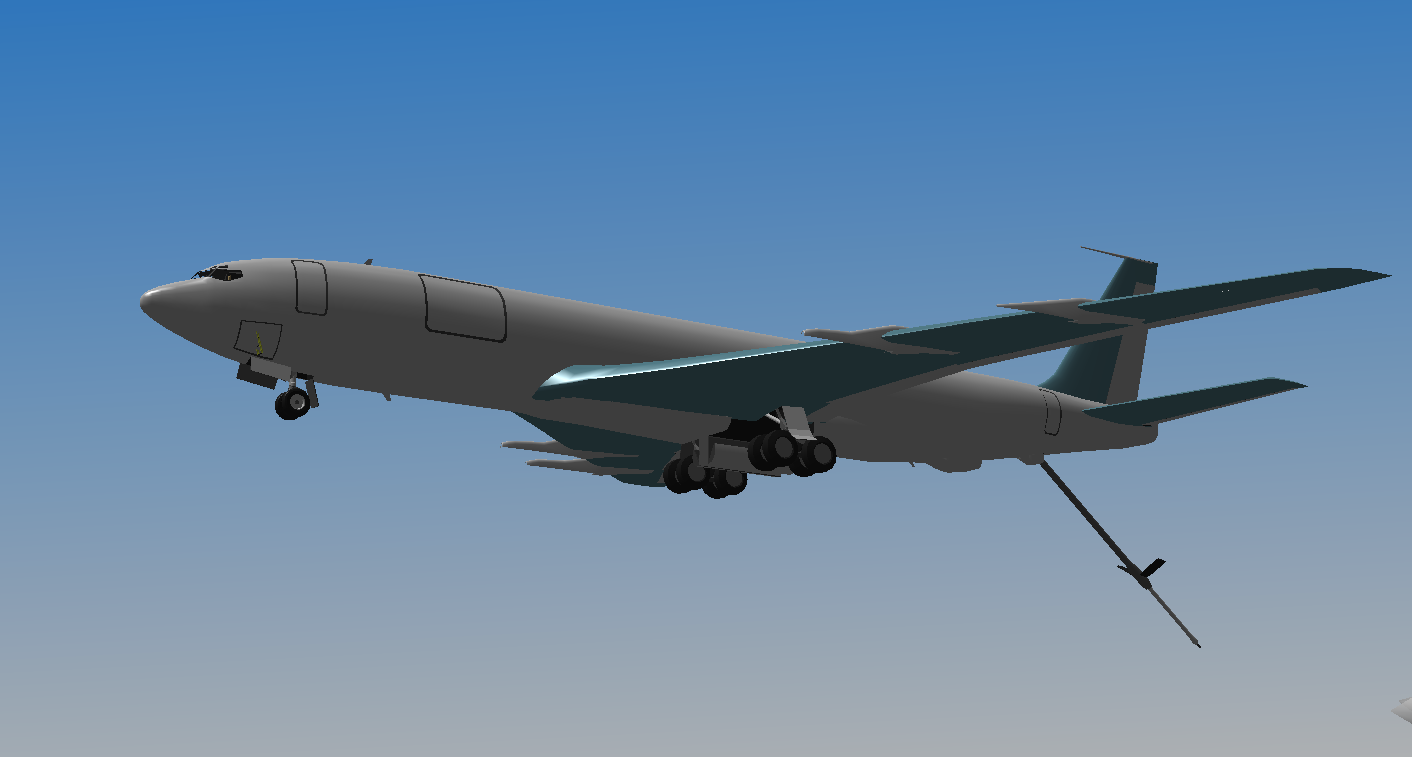 I'm planning on keeping the engines separate until I have fuselage sections done. This helps me simply slap on the engines that I need.

Civilian Pack
(unknown ATM) but probably a few versions of the major airlines and a couple different versions of the 707.
Check out my website YSDecaff for all my tutorials and addon releases.
Visit by Bitbucket page for Python codes: https://bitbucket.org/decaff42/

decaff_42 wrote:Well, I made it into the air!

As you can see I added the door under the cockpit, but I need to fix the ladder that goes up into it. Apparently it is a bit lower than I thought it would be in blender.

I'm planning on keeping the engines separate until I have fuselage sections done. This helps me simply slap on the engines that I need.

Okay I've been working hard! I currently have 10 aircraft for the military 707 pack.

Boo! Too much greatness. What happened to mediocrity?

I don't think decaff was ever introduce to mediocrity went directly to excellence.