Another project I completed whilst on tour in the 'sunny' Falkland Islands. The original intention with this model was to upgrade Iceman's typhoon, as it seemed like the most promising candidate. Unfortunately though the more and more I compared the model to both source imagery I had to hand and the jet itself while working on it, the more I was steered toward scratch modelling my own. In the end i think i used about 75% of the fin, used the vertices on the trailing edge of the wings as a profile for my own, and the pilot from Iceman's model, the rest was scratch built, with pretty hefty amounts of detail. I may have got a little carried away with the main undercarriage and the engines.... Particularly the engines... 240 something motion paths in the nozzle petals...

Near enough everything on the jet works as it does in real life, the flight characteristics were fine tuned with me, one of my fellow engineers, and by two pilots who currently serve on 3 and 6 squadron respectively. I have included a full selection of stores that can be loaded onto the aircraft, including ASRAAM's, AMRAAM's, MBDA Meteor, Sidewinder, ALARM Air to Ground Missile, 500lb Advanced Paveway 4, 1000lb Advanced Paveway 2, and standard 1000ltr Supersonic Fuel Tanks. The pack contains examples of single and twin seat aircraft from all squadrons that the typhoon has served with to date, including the 4 aircraft of 1435 Flight. The model you see in the screenshot is my own fictional depiction of the up and coming Tranche 3 variant with the conformal spine fuel tanks, though i may have over exaggerated the weapons load somewhat. Its within the MTOW...

thanks flash for doing my favorite military aircraft

Even if I do not fly combat this gem is a must have.Your experience is a valuable asset not only to your service but to us as well Flash.Excellent work in this case seems to be an understatement.

Absolutely incredible. Have you ever thought of making things like these for high end games and make money from it? Thanks so much for these amazing aircraft!
I don't know who you are. I don't know what you want. If you are looking for my signature, I can tell you I don't have one. But what I do have are a very particular lack of skills, skills I have imagined having over a very long career. Skills that make me are completely useless in any situation. If you stop reading now, that'll be the end of it. I will not look for you, I will not pursue you. But if you don't stop reading, I will look for you, I will probably not find you, and I will kill your refrigerator.
Top

Thanks for the great reception guys

Hopefully the experience of flying them wont dissapoint

Alpha, honestly I haven't, i quite like just doing the freeware stuff as a hobby. My true passion is engineering, and generally getting stuck into actual physical projects. I bought an old V12 Jaguar XJS last year that's been my project car that i occupy a fair bit of my free time tinkering with

Too much for my mind to deal with...

I think I'm in love

Very nice indeed.
At first I used to get angry, now I try to be amused.
Top

I feel like I could say something nice about you or the aircraft, Flash... But it would be beating a dead horse. You know we're in love...

Looks like there's a new aircraft for me to continue the 6sdn typhoon demo! awesome work as usual 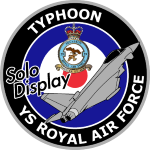 LodFlashHeart could you please identify what's wrong in the .dnm???
when I repaint the Typhoon for RMAF's MRCA Program fictional aircrafts and exported it,the Typhoon views other landing gear but when I open back in blender it doesn't appear...

I had that too when i was testing UPEO's typhoon...
I thought i had something done accidentally to the model.

Ah thank you for announcing that, i'll keep that in mind.

Looks like you've got somewhat of a conundrum on your hands there buddy. I'm afraid i don't really know what the issue is there. Take all the deals etc off and have a go at transferring them to a fresh blank dnm via notepad. As for me purposely building inconveniences into my models to make them difficult to work on, rest assured this is not the case. By nature of their intense detail and complicated SRF paths, they can present a few issues until you fully get to grips with them.