Double slotted inside? Wierd because this image shows different... I know that the spoilers sorta act like the second set of flaps by moving in sync with the flaps to create a seamless shape for the airflow.

https://www.youtube.com/watch?v=snrE50LqDJM
Check out my website YSDecaff for all my tutorials and addon releases.
Visit by Bitbucket page for Python codes: https://bitbucket.org/decaff42/

Yeah, I stand corrected, see my previous post (I edited it). And you're right, the ailerons are also in sync with the flaps to produce a bit more lift. Something Airbus has done with its own planes since the 300-600R and Boeing has done since the 777. Once main gear contact occurs, the ailerons immediately switch to "spoiler" mode and move upwards along with the spoilers to cut off lift even more and slow the plane down that much more efficiently.
Hi! I make average, undesirable, boring grey maps for YS Flight!

Okay, because I've seen some flight sim models with double flaps on the inside, so I was getting confused with things (seemingly) not matching up to real life.

It is an ingenious way to get some more lift for probably not much more in terms of weight from the actuators and hinges. I really like how the ailerons also work for the flaps and spoilers. I don't know how I would replicate that kind of range for YSFlight. To get the full range of the spoiler, the combination of spoiler and full aileron would push the aileron really high. I think at best I would have to have smaller aileron and spoiler throw in order to combine them.
Check out my website YSDecaff for all my tutorials and addon releases.
Visit by Bitbucket page for Python codes: https://bitbucket.org/decaff42/

Yeah, I wouldn't even begin to know how to go about doing that, you're the man for the job right there

. But really, no worries, YS Flight does have its limitations when it comes to moving parts, especially things like syncing ailerons with spoilers and flaps.
Hi! I make average, undesirable, boring grey maps for YS Flight!

I'm glad you are excited! I am too. As of right now I am right on budget in terms of vertices with 24,000 without landing gear or flaps. I don't expect those to take more than 7,000 or so vertices, but we have some wiggle room.

I'd like to get the variable geometry working for this aircraft and have begun to plan out how the wings are going to bend. It will take a bit of work, but I think I can get this going if I am patient enough for it. I'm thinking a solid week of preparing this for animation at a minimum.

If I cut the wing into 6 sections I can get pretty close to the real curvature of the wing. I am trying to minimize the number of animations that get cut up from this, so I'm cutting around the flaps and ailerons. I'd also like to keep the engine from moving if at all possible to reduce that animation nightmare.

Can the +flex be in stages or abrupt when it reaches its upper limit @ speed and was it also designed to flex in the - range as well? No outragious expectations decaff just discussion

Decaff, the engines move minimally according to my memory as well as this little diagram. That little few inches of difference shouldn't matter too much. If you want to, a trick could be to just animate from where the wing meets the nacelle and outward and it would look just the same if it were me. Plus it would smile a bit more

The 787 is the only plane I've seen that comes as close to a living bird literally flapping its wings!

As far as the wing itself moving, I believe the stock B-52 actually has that functionality, as you go down the runway and the airspeed increases, the wings start coming up. You *may* be able to use that as a reference.
Hi! I make average, undesirable, boring grey maps for YS Flight!

DreamLiner, YAY! Can't wait for it!

Actually the B-52 has to overcome - flex in the wing when fully loaded with exterior wing stores and fuel if not for the outriggers the wingtips would be buried in the ground 6'+-. Not vary conducive to a smooth transition to flight.

any comments for me to improve the A350 more,Decaff?
My official website
My Twitter
see my previous release and WIP gallery here
NOTE:All my rework model are allowed for repaint and need to credit on publish..no need to PM me anymore
[align=center]for modifications on my mods,please PM me first,and credit me and original creator(if my work were rework)[/align]
Top

@ NajmiCreative - This sort of thing is what the current projects topic is for.

787 update! I was able to get something resembling flaps and spoilers made! it is weird because there are tons of different ways the flaps go together on paper, but nothing really matched up exactly. So I gave it my best guess, and I think it will look pretty good!

I am currently without landing gear, but currently just under 26,000 vertices and just shy of 19,000 faces, so there is a pretty good budget left over for that. All the SRF files for the aircraft come in at 2.4 mb, which is approximately what I was expecting. I have found that with a dnm or bunch of SRF files, 1 mb translates to ~11,000 vertices.

I have asked Lord Flash for some help with the landing gear and he kindly agreed to help out on this project.

*Begin Joke*
Knowing LF, the landing gear will feature twin turbocharged V12 auxiliary oil pumps, a few dozen miles of cabling, half a mile of plumbing and enough hydraulic pressure to launch a man to the moon.

*end Joke*
Check out my website YSDecaff for all my tutorials and addon releases.
Visit by Bitbucket page for Python codes: https://bitbucket.org/decaff42/

Decaff, as usual, your work and attention to detail excites me! Will we be seeing the 787-8 of this bird for now or do you have your eyes on any variations of it as well?
VNAF Aerobatics Commanding Officer and Founder - - - YSAS Member - - - YS Aerobatic Pilot
YS ACC A-10 East Coast Demo Team pilot - - - B-1B Razor Demo Team pilot
VFA-49 GhostHawks Commanding Officer

I feel so ignored now lol

then again i havent really made updates
Top

Well, I have made progress rigging up the model. I am only working on one half of the model to ensure that I can undo any errors quickly.

After much examination, I have found that I cannot animate the root of the wing from the engines inboard. The issue is not with the engines, but with the landing gear doors. The way the doors are shaped makes it seem impossible. I may return to this towards the end to see if I can come up with a solution at a later date, but I am not too optimistic. In any event, the inner portion of the wing not moving is not a big deal. I can still get a ton of flex from the rest of the wing.

The one thing that is driving me insane is the number of flaps and spoilers I need to cut up in order to get the wing to bend in a way that doesn't look like it is falling appart.
Check out my website YSDecaff for all my tutorials and addon releases.
Visit by Bitbucket page for Python codes: https://bitbucket.org/decaff42/

The last sentence is funny considering that I always expected the wings to fall off the 787 when it finally got to the runway for its first takeoff.

Patrick31337 wrote:I always expected the wings to fall off the 787 when it finally got to the runway for its first takeoff.

Your Wish is My command!

A couple of attempts to correct the parent-child relationships between segments of the wings. 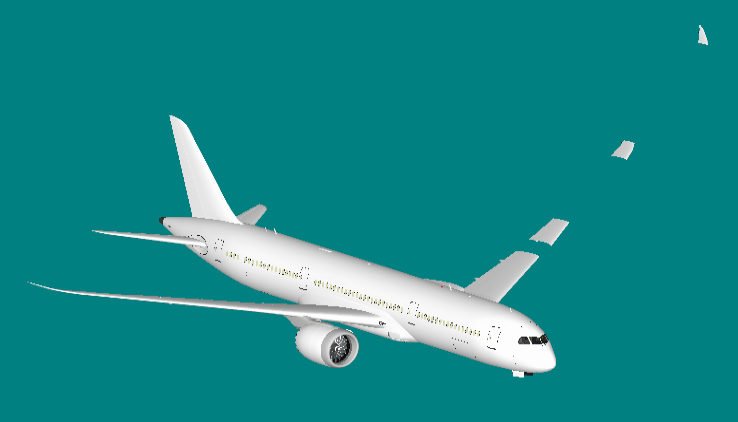 Took 3 attempts, but I finally figured out that the animations that I put in originally were messing things up, so I worked around that and got it looking good!

Flaps Deployed on the ground/Slow Speed

Sorry for my harassment last time,Decaff....I don't mean to interrupt you....
btw,the 787 looks cool and almost look like CHF's 777.....
My official website
My Twitter
see my previous release and WIP gallery here
NOTE:All my rework model are allowed for repaint and need to credit on publish..no need to PM me anymore
[align=center]for modifications on my mods,please PM me first,and credit me and original creator(if my work were rework)[/align]
Top
Post Reply
1144 posts