YSFlight general discussion & everything in between
Post Reply
40 posts

The 8th Tactical Fighter Squadron and the Mahora Demonstration Team invite you to..
The Grun Squadron Fly-in

This event was planned to bring together the YSFlight Community for a event consisting of both Civil and Military-oriented activities, A ATC Session (from 11AM EST [3PM UTC]) to 3PM EST [7PMUTC], and a "Turf War" event from 3PM onwards.

Below is the description and rules and guidelines of both. 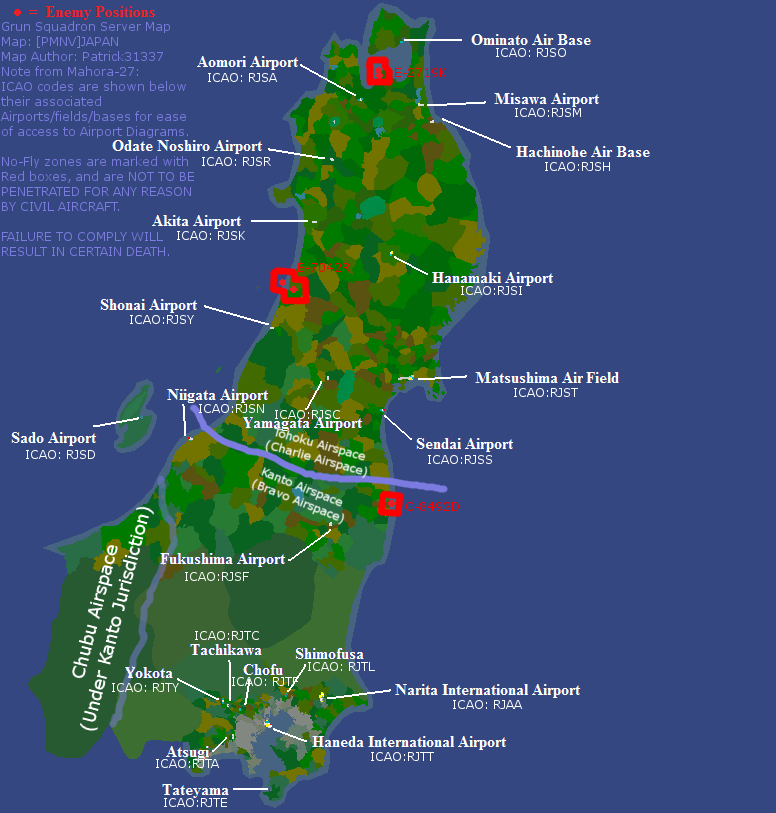 ATC Session
Rules and Guidelines
The Fly-in will consist of two sections, a Civil/Military Free-roam event which will take place for 3-4 hours, and a “Turf War” event, which will last until one side wins, or everyone goes home.
There are three regions of the flight area.

Kantou – The Capital Region of Japan. Home to Tokyo and the (Fictional) Mahora Academy, which will host a Airshow at Chofu in the coming months, courtesy of the Grun. This region’s airspace is administrated by Tokyo-Haneda International Airport under the name of Kanto Center.

Chubu – The region of Japan west of Tokyo, and north of the Kansai and Osaka regions, which are sadly, not included in the flight zone. Chubu, due to the lack of airports, is not under any ATC jurisdiction. Those seeking to engage in Aerobatics or Military activities Are to notify ATC with their intent to engage in such activity. They will then be given a vector to Chubu, where they can engage in such activity.

And finally, Tohoku – The birthplace of Dr. Soji “CaptainYS” Yamakawa, and Misawa Airport/Air Base, home to the 8th Tactical Fighter Squadron “Grun”. This region’s airspace is administrated by Aomori Airport under the Name of Tohoku Center.

There are three No-Fly Zones, E-7042R, E-2719K and C-8492D. These airspaces are to be penetrated by Military aircraft only, due to anticitizen and foreign elements in these areas. The forces are confirmed to have SA-19 Grizzly or “Buk” Surface to air Missile Systems, as well as various AAA and VLS ship-board systems. As such, caution is to be practiced near these No-fly zones.

Air Traffic control will issue NOTAMs on all frequencies to when military operations are taking place in these no-fly zones, as well as when the threats have been neutralized. Once threats have been neutralized, aircraft may fly through these areas. After two hours, the Server will reset ground objects, which will reinstate these No-fly zones until they are destroyed again.

The Transition lines are used to define where each airspace begins/ends. When you cross these lines, ATC will instruct you to contact the Center appropriate the region you're entering. For example, Varren is flying a PAVA 787 to Haneda from Akita with the callsign "PAVA 407". When he approaches the transition line to Kanto, ATC will say "PAVA 407, you are leaving my airspace. Please tune to Kanto Center on 135.29MHz." Varren would reply with "PAVA 407 for 135.29MHz." He would then switch to the Kanto Teamspeak, or would immediately announce over F12 chat - "Kanto Center, PAVA 407 with you, Type Boeing 787 with intent to land at Haneda." From there, the Kanto ATC would acknowledge that Varren is in his airspace, and communications would resume from there.

Please follow the instructions given to you by Air Traffic control. Failure to comply with ATC instructions will result in a intercept by the Grun Squadron, followed by death if the offending aircraft does not comply. To avoid being identified as non-compliant while being AFK, please poke a ATC or a Grun Squadron Member on Teamspeak or notify everyone on F12 chat that you are going AFK. Make sure you enable Autopilot before you leave your computer. If you do not understand what ATC is telling you, ask them to read it back again, or ask a Grun Squadron member for help, We will be glad to assist with making your flight more enjoyable.

Also, make sure to have Airport diagrams available, be them on paper or through websites such as AirNav and SkyVector. This will help quite a bit with navigating landings and taxiing.


Turf War
Rules and Guidelines
As for the second portion of the Event, Turf War, the situation is as follows.

The Chinese are several months into a invasion of Japan, and have succesfully taken Southern and Central Japan, leaving only Tohoku and Hokkaido Unscathed. The JSDF and NATO are in a frenzy, fighting to retake the Japanese Archipelago, and calling on the UNSC to hire and dispatch independent contractors, or “Mercenary Groups” to take on the Chinese, The Grun being one of them.

The two teams - BLUFOR and OPFOR, will have control of all airports in Tohoku and Kanto respectively.

The Objective of this event is simple – Capture ALL airports. To Capture a base, destroy all ground assets at a base or land any heavy aircraft at said base. Upon doing this, the base will belong to your side, and you may take off from it. You are not allowed to Launch aircraft from a base you do not own or you have destroyed. Doing so will result in your aircraft being destroyed by Mahora-27 through the server. To allow a base to be used by your team after being destroyed, land a heavy aircraft on the base, and notify the administrator that you have retaken the base, and the ground objects will be reset. If multiple bases are in the process of being captured, if More than 50% of the base in question is destroyed, The attacking team automatically wins upon ground object reset. If less than 50 is destroyed, the base is still under control of the defending team. The attacking team must declare they are attacking said base(s) once they are with in 40 meters of said base(s), as to allow the defenders to spawn themselves at and said bases and take off.

Each Team will have a MILCOM officer. This person will relay orders to other players for certain objectives to attack, aircraft to escort, etc before sortieing. Players are advised to follow the orders of these people, and also to work together with other players. As Battlefield 3 and 4 Multiplayer taught me, Your team works best if you know what the hell you are all doing, and know how to take on opposition together, instead as a lone wolf, because in war, A lone wolf is a dead wolf if he doesn't know damn well what he's doing. I suggest everyone who participates, mic or not, join our teamspeak during this portion of the event so that Teams can discuss tactics without the enemy listening in. (On MILCOM, take note that your Team's comms net can be compromised at any time by the enemy.

I suggest that, in the same way I said for WW3 weekends a year ago, You may want to create your own "provisional squadrons" with your friends, so you have a group you will fly with and work with.
Also, Teams may engage in “electronic warfare.” This means that players can launch in a EW aircraft and either listen in, or “jam” communications for the other team by joining their teamspeak channel and playing music or other nuisances to obfuscate the enemy’s communications. The rules for instigating electronic warfare is as follows:

Aircraft used MUST be defined as EXPLICITLY FOR EW or HAS EW AS A SECOND ROLE. (E/A-18G, EA-6B, A-50, E-2/3, E-767, Su-24, etc.)
Aircraft must be within 50 miles of a enemy base.
Aircraft must notify a administrator that they are going to instigate EW.
Administrators WILL notify all units of the base you are closest to upon instigating EW.
Once you are shot down, you are to cease all EW activities until you are in the air again and in range.
Pilots may not mute the jamming aircraft, but may silence the channel as a whole.
Pilots may not use MILCOM/ATC to communicate once in the air (Excluding landings). Those that do will be moved back to their Comms Net.
EW aircraft are NOT ALLOWED IN THE MILCOM/ATC channel of their enemy, as well as any others not on the team associated with that channel.

You may pick which side you want to fight for (OPFOR (China - IFF2) or BLUFOR (NATO/JSDF - IFF1)) by posting what side you want below or in a PM. After A certain amount of people have entered, A MILCOM officer will be selected from the list of persons participating. You may also just join in on the day that it is taking place, but once you pick a side, you are stuck on that side for the duration of the event.

As of the most recent edit to this post, these are the following participants -

We are also looking for a possible reserve ATC if one of ours is unable to make it to the event. Please PM me if you are interested.

This sounds like a lot of fun, and you've obviously put a load of effort into this. I'll be coming.

PLAF for me seeing as there's none at the moment.

Alright, I'll have you down for PLAF then.

I could deploy the X-29N to assist with dealing with rulebreakers.

i can join too with my XFA-33
This user account has been replaced by a new account with a new username.
Top

I'm joining the Turf War on the NATO/JSDF side in my provisional squadron:
Squadron callsign: Wolves
Wolf 1: Snake6
Wolf 2: Kozeph (my friend, he's not an HQ member.)
We will not use EW.
Top

ha ha! an honorable warrior dosen't need to stup to such trickery. i salute you sir!
Owner, Dragonic Machine Industries

Sorry, Farrell. You may only use the aircraft installed on the server. The XFA-33 isn't one of them.

I'm joining the Turf War on the NATO/JSDF side in my provisional squadron:
Squadron callsign: Wolves
Wolf 1: Snake6
Wolf 2: Kozeph (my friend, he's not an HQ member.)
We will not use EW.

Well then. Good to see you're not playing dirty.

Wolf 1 and 2 will be added to the NATO/JSDF team.

holy crap, who the hell has a Fenrir around here?

IIRC there are Fenrirs in GACRp...
Top

i think i need to learn how to spell

IIRC there are Fenrirs in GACRp...

well what is plane that at the server

Mahora-27 wrote:Yes. However, we won't have GACRp on the server because it doesn't seem to play nice with OpenYS for some reason. I really do want it on there, mainly because the Grun F-18 is in there.

then carve out the Grun F-18 from the GACRp and include it in the new Grun Squadron pack.

Mahora-27 wrote:[post]90301[/post] The GACRp Grun aircraft won't be compliant with the designs set up for the new pack. Besides, I believe either Vic or Abel is working on a F/A-18E. I can't remember since i've been up for about 19 hours.

WHAT!!! you get your rear in the bed young man before i shake my finger at you!!