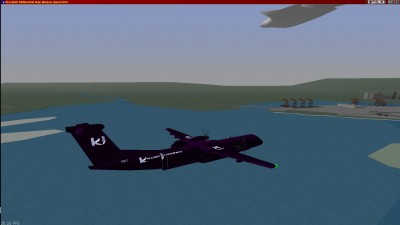 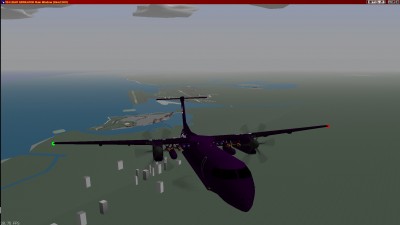 here's a modified version of Takaty-'s DHC8-400.
this little gem was done for attacking ground targets and looking good while doing it

i've done a complete repaint of the aircraft and added missile tubes for AIM120s and AGM65s and pylons for bombs and external fuel tanks. i have also added a couple of rocket pods and two cannons with 1250 rounds of ammo.
i increased the horsepower to 10142hp (combined maximum shaft HP of the PW150A engines) from 9160hp.
i decreased the maximum amount of fuel from 5.54 tonnes to 3.402tonnes
i made a small adjustment to the drag formula in the .dat file. the adjustment allows the aircraft to obtain a maximum speed of almost 400kts at altitude. i've also increased the effectivness of the spoilers to aid in low altitude maneuvers.
the "Killer Instinct" and "KI" decals glow in the dark and there are external cameras on the tail and on the underside of the body.

Credits:
Takaty
oranleed (pylons)
Nintendo/Rare (decals were made from screenshots of the SNES version of Killer Instinct)

Modders notes:
when doing low altitude maneuvers, stay above 100 feet when doing sharp turns to avoid clipping the ground with the wingtips.
the camera on the underside of the body has a 28 degree downward pitch and displays the HUD. it is possible to fly the aircraft using this camera, but please avoid doing so if you experience motion sickness.
Owner, Dragonic Machine Industries