The upper aircraft is the F-5F aircraft. As Kujo pointed out, it, the inlets, and armament give that away. The F-5 two seaters all dipped in the nose, which was carried over to the T-38. I think it was done to keep the back-seater with a less-obstructed view forward. This is something that was present in early F-5 models like this F-5B. 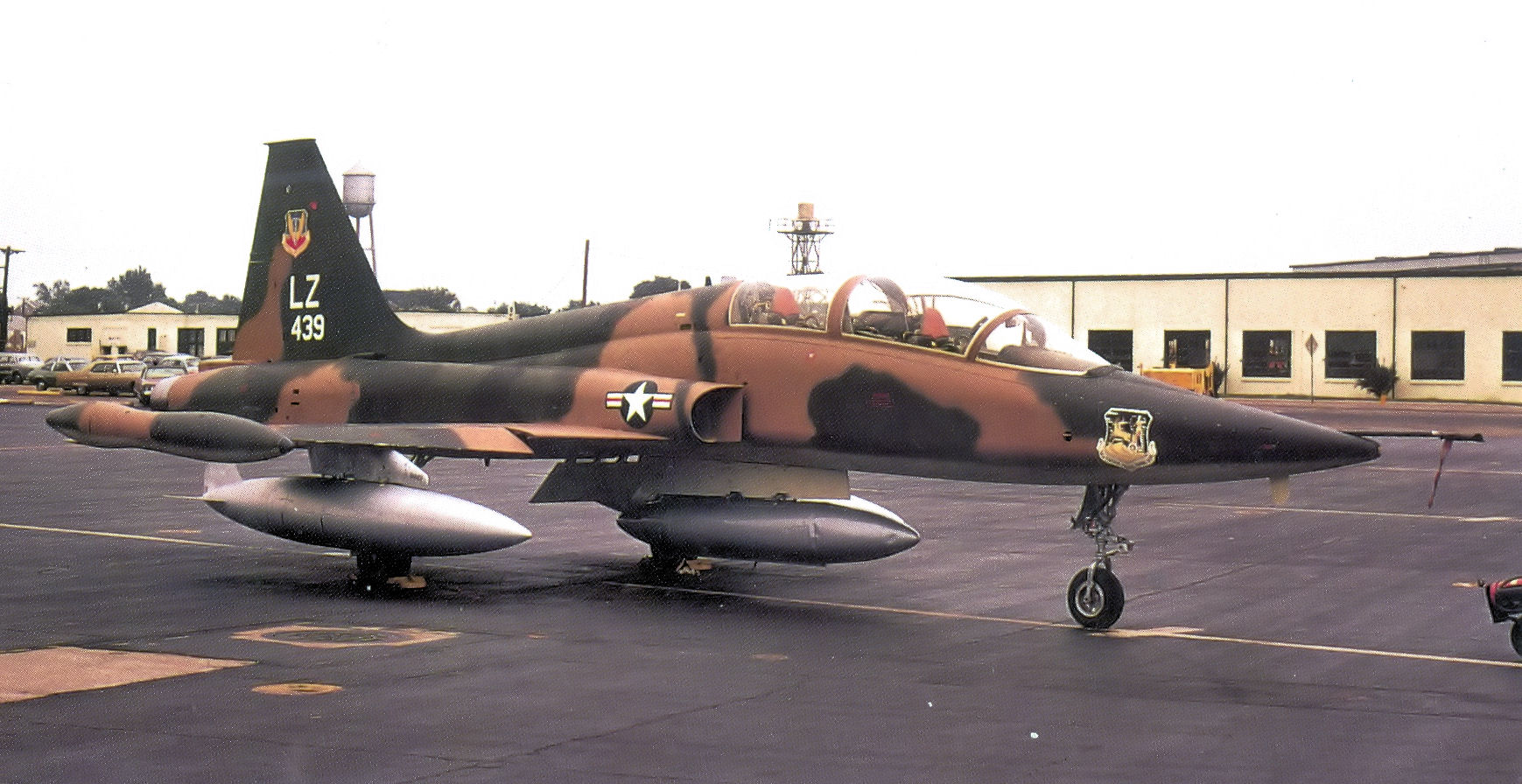 It should be noted that this aircraft has a similar nose to the T-38C. The noses have changed over time as shown on this T-38A:

Here is an F-5B with another nose style. 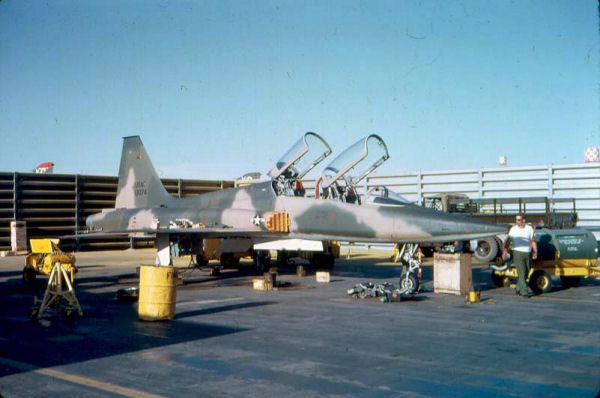 To my eye, it looks like they took the F-5B and updated the inlets and wings and removed the weapons capabilities. The F-5B was a trainer/combat aircraft, so that is probably why it has a lot of similarities. I think the engine nozzles were updated slightly, but I have not consistently seen that.
Check out my website YSDecaff for all my tutorials and addon releases.
Visit by Bitbucket page for Python codes: https://bitbucket.org/decaff42/

So did the F-5B come first and then the T-38? It's also interesting how the T-38 has changed as well because the current ones look different than that T-38A (middle picture). Again, the F-5F exhibits very similar features and almost looks more like a T-38 which is why this is so confusing lol.
VNAF Aerobatics Commanding Officer and Founder - - - YSAS Member - - - YS Aerobatic Pilot
YS ACC A-10 East Coast Demo Team pilot - - - B-1B Razor Demo Team pilot
VFA-49 GhostHawks Commanding Officer

Actually, according the wikipedia, the F-5 was developed along with the T-38. I was mistaken. Probably explains the large similarities to the F-5B as they were designed for very similar purposes.
Check out my website YSDecaff for all my tutorials and addon releases.
Visit by Bitbucket page for Python codes: https://bitbucket.org/decaff42/

and then,who's gonna made the T-38??no one have free time for?
My official website
My Twitter
see my previous release and WIP gallery here
NOTE:All my rework model are allowed for repaint and need to credit on publish..no need to PM me anymore
[align=center]for modifications on my mods,please PM me first,and credit me and original creator(if my work were rework)[/align]
Top

Y'know, funny thing today. While at Sun 'n Fun, we noticed a jet takeoff. My buddies called it a T-38, but I knew better! It was an F-5B/F and we argued about it for about 15 minutes (looking like crazies of course) until it was announced. Goes to say I was happy my research paid off

Looks like the nose gear is located more to the front as well.
Never looked at the Talon closely actually. Pretty bird.

Can share the Squadron signal book if anyone takes this on!
http://ysmajor.weebly.com
Top

I got eyes on for this project. Is anyone currently doing a T-38 or do I have permission to Lock on Target and Engage?

I have not heard of anything, but I believe someone did an F-5/T-38 Exhaust/AB work a while ago. Kujo perhaps? I do not remember. Perhaps looking into that would be worth-while as it would add some nice detail!
Check out my website YSDecaff for all my tutorials and addon releases.
Visit by Bitbucket page for Python codes: https://bitbucket.org/decaff42/

Thanks Decaff, I'll look into it as I don't want to step over someones work if there's aleady one in progress.

NightRaven has announced that he "might" do one in the near future, after all of the HQP:GAC stuff is done. But that seems a bit longer than I was expecting to wait (no problem with that) MAYBE I can negotiate with him if he really wants to do it. If not then you guys can go ahead and take over

The original request was to make one blank T-38C, then send it my way so that I could release a pack with multiple liveries of it. I would give the base model creator lots of credit for helping out and making it. I'm not sure if you would be fine with this plan, though.
Top

P.s Guys you can't make Thunderbird 2 because i might be making that in 2020. Jokes

Also if my calculations are correct, the year is 1985, a free pizza delivery will be turning up at your door...oh wait, you missed it.

Might is pretty darn tenuous thread to hold on to. You either will or you won't.And so what if there are any number of modelers working on one type? What wrong with a little variation in style and experience.If you want to make one than make one.Don't wait on someone else because you may be waiting for a vary long time,if ever.

No need to worry guys we have worked this one out. Me and Kujo will be delivering you guys a fresh T-38C.

Yes it is, but some of the paints are not completed due to the business of my schedule. They will be released some time this year, that's for sure

Thanks a bunch, Dan. You've been a big help in developing an aircraft I've always wanted to see in YS