55F and breezy. Not the good kind of breeze though. It's the kind that gives a premonition of a bad thunderstorm rolling in at some point. Temp dropping slowly with on and off drizzle and a few spots of light rain. Saturday and Sunday are anticipated to be bad with local and coastal flooding.

The forecast is showing it might get to 51°F on Tuesday. Winter is coming.

Good loard! We are supposed to hit 5℉ degrees tonight. And with 40mph winds expecting -20℉.

Also compared to the last few years it been a while since we seen temps get below freezing before Jan./Feb. That "coldest and snowiest winter yet" prediction seems true so far.

I was born in a blizzard, and my wife believes I must be a mutant for not feeling the cold.

I will raise the heat for her sake though....poor thing, she's cold at 75F and below.

It's thunderstorm outside... Ugh, there is wind advisory...
Top

So, how's the weather in my area like you ask?

This evening, I peered out the window on the 15th floor of the room I work in (our building is a 16-story high-rise office tower built in the late 70s) and noticed what appeared to be fog rolling in (it was actually drizzle). With the temperature still at 30F, I really wanted to leave work and head back to avoid what I quickly realized would be a bad commute home. While most of the area roads and highways were fine (ground temps are still above freezing), the bridges and overpasses became slick very quickly. I don't think I have seen that many red and blue flashing lights on each bridge/overpass I drive under heading back home each day. There were 40 accidents, those only reported. The unreported accidents were a lot more I assume.

Now the temp will actually rise overnight and tomorrow morning's low is expected to be around 36F (32F right now). And tomorrow we'll have 40mph southwesterly winds with a balmy 67F for the afternoon high.

After that, we'll get an ice-cold Arctic air mass behind an approaching Canadian front, and some light snow behind it on Saturday, with gusty north winds and sub-freezing temps.

See? Something for everyone the next few days!
Hi! I make average, undesirable, boring grey maps for YS Flight!

We have rain in the forecast for Friday and Saturday, but the temperatures will be going from the 20s tonight to the 40s tomorrow and up to 67° Saturday, according to my ForecastFox bar in Firefox. Sunday's high is 26° and 9° for the low Sunday night.

Went from a balmy and yucky 80F degrees to a staggering 39 in the span of an hour here in Houston as a cold front chugs along bringing some gusty winds that reach up to 30+MPH. We had a Freeze Warning up until 1030AM but that was pushed up farther North from where I am at. It's supposed to drop down to 29F tomorrow with a chance for a Hard Freeze. Again, North of me but close enough to where I stay.

I wouldn't mind your "balmy and yucky 80F" right about now. I'll just let this WS 4000 emulator screenshot do all the talking for me: 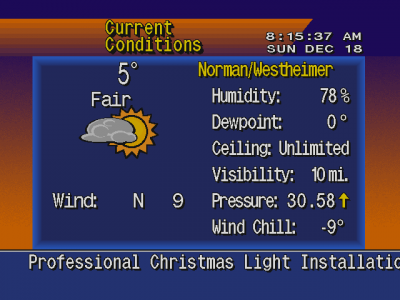 Yesterday it was 75°, so I grilled meat for supper. Then it started to rain and the temperature dropped. By midnight the ground was frozen solid.

Random_Flyer66 wrote:It's currently the usual 860 degrees Fahrenheit here with 223 mph winds. It's pretty cool except for the fact that I CAN'T SEE ANYTHING.

24 hours ago I was outside in a t-shirt starting up the gas grill and watching some deer in the field across the road. Today the temperature is 25°F, wind is calm, and it's partly sunny. The ice seems to be melting a little, but it's not supposed to get above freezing until Tuesday.


Me wrote:We had the kerosene heaters going, so it didn't get below 65° in the house, and we had an oil lamp that made enough light to get around. My grandmother called about 5 AM and said her lights had gone out at the same time, and she is 15 miles away, so it must have been most of the county that lost power. She didn't have heat and she normally keeps her house at about 78°, so she was freezing.

Patrick31337 wrote:24 hours ago I was outside in a t-shirt starting up the gas grill and watching some deer in the field across the road. Today the temperature is 25°F, wind is calm, and it's partly sunny. The ice seems to be melting a little, but it's not supposed to get above freezing until Tuesday.

Quite the opposite here. Friday/Saturday was the cold and my car battery died, had to jump it with a spare and the tiny 10mm nuts on the terminal ends told me I had to use my bare hands or else they would leave me and never come back. It wasnt easy but I got it started.

Today, Sunday... boy oh boy what a diffrence. I was out in a tshirt. Some light rain at times melted all the snow we got on saturday morning away. But really what a change in temps!

Turbofan wrote:I wouldn't mind your "balmy and yucky 80F" right about now. I'll just let this WS 4000 emulator screenshot do all the talking for me:

I need to fire up my WeatherStar emulator as well. Haven't used it in a while.

It will be a warm Xmas. The high temp will be near 70F later today, then we get some showers and storms. Nothing severe though. That will be relegated to Kansas. 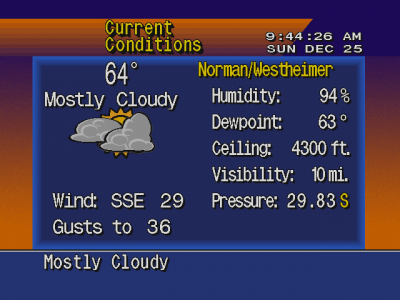 The high is 70 today and tomorrow with rain and storms. Winter will be back in a few days, though.

Users browsing this forum: No registered users and 21 guests