by Turbofan
^Nice job on the nose! Looks great.

by decaff_42
Thanks! I did another pass at the nose and I think is as close to perfect as I'm going to get it.

Anyway, I decided against refurbishing a sketchup model of the Pratt & Rolls Royce engines for this project. They were horrible. Therefore I modified the GE engines to become the Pratt & Whitney engines and then scratch made the Rolls Royce engines from a handful of okay images. It is interesting because the RR engines have about a 10% smaller diameter (1.88m) compared to the other engines. 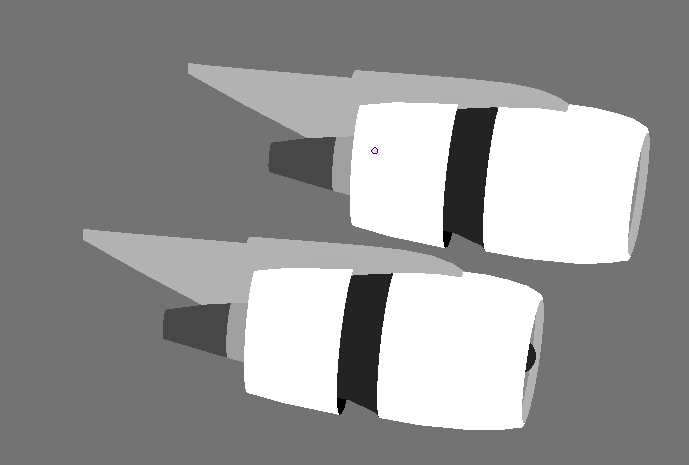 by Barr
Now I'm just curious. How do you go about stretching the models? Do you split the model in diffrent parts and move and delete geometry? A modifier you apply? Or the models were already available?

From what I've read it seems you select a portion of the model and move and delete parts in order to get it done.

by decaff_42
So I tried to write up a quick and dirty tutorial about how to do that last night and I thought I hit submit, but apparently did not. Anyway, in case you did not see the link in the mchat, you can find the new tutorial on my website here.

Okay updates on the 757. I have eased off the development pace so I can do other work, but I did some research and apparently the GE engine for the 757 was dropped during it's development. Therefore I decided to simply have 10 versions of the aircraft, 5 with the Rolls and 5 with the Pratt engines.

by jetskit
Decaff, don't want to sound rude but, shouldn't the 757 cockpit have that authentic brown leather colour?

by Gunny
The interior colors of the 757s as in any aircraft can vary widely depending on the customers order preference.So there is not really any [authentic] color.Probably what you are referring to is the standard stock base color of muted brown.Most airliner flight decks lean toward muted tones of various colors in order to promote a relaxed calm feeling without putting the flight crew to sleep as it where.But decaffs rendition is just as authentic as any 757s in service.
Sorry decaff I didn't mean to highjack you post

by decaff_42
I was out grocery shopping and cooking so I didn't see it until now, but thanks for chiming in Gunny.

While the interior colors vary, I just don't like the tan and brown setup. To me it is so very unlike most cockpits to almost be distracting so I decided against it. If you want to paint it a different color for your VA (once I finish everything!) feel free to do so. I am simply exercising my creative license here.

Well after getting some homework assignments finished today I began to finalize the blank 757 aircraft. I ran into a whole host of issues, including some dnm import/export issues with the engines (missing faces and such).

I found a mistake in the cockpit which I fixed:

I also updated the flap movement so the trailing flaps moved in addition to rotating relative to the first flap: 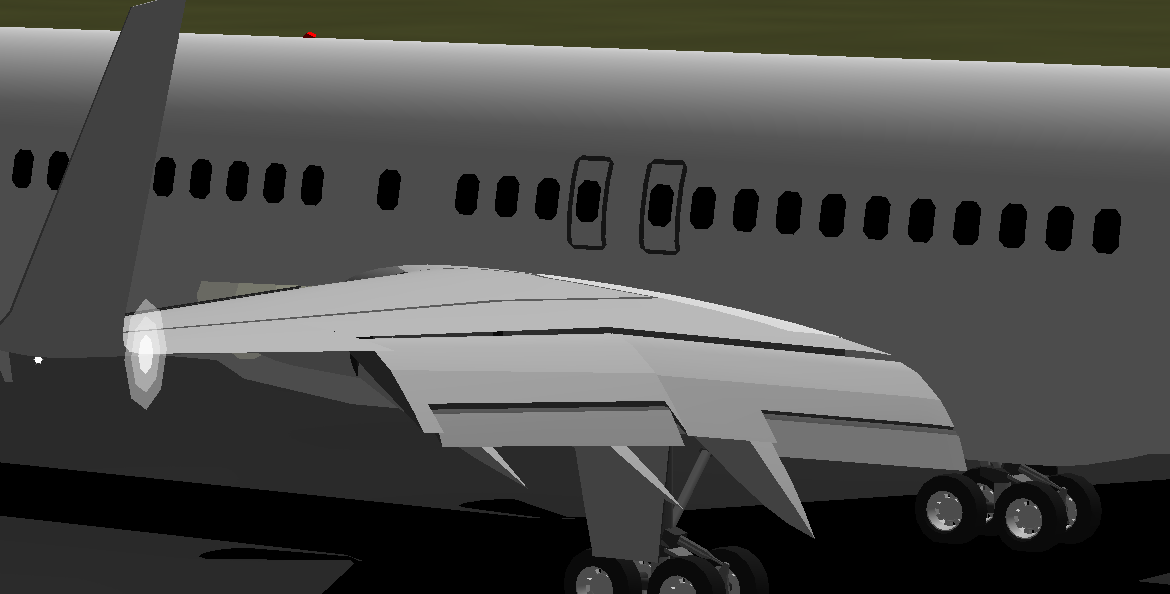 Finally I touched up some features on the cargo version of the -200. Please ignore the lack of engines as this was done before final blank generation.

Overall I am very happy with how the aircraft has been flying in my test flights. I used the dat file from TF58's 757s and modified several areas to make it more realistic and then match the new model.

It cruises right around 500-525 knots at 30,000 feet. I'm not sure how long it's legs are, but there should be enough gas for more than 2.5 hours of full-throttle flight. (based on my calculations). Additionally it seems to share the real life characteristic of either slowing down or descending - not both at the same time. (I read a few pilot's comments on how it handled.

by decaff_42
I was digging around some 757 images and found that Varig quite has a few different variants. I was about to make the Varig logo before I realized that I already had part of it done for a civilian 707 repaint. Last night I went in and made the script and then today I modified the start logo into an arrow that some of the cargo 757s have for Varig.

All of this was hand-traced as dealing with hundreds of different curves just wasn't something I wanted to tackle.

The script is only 600 vertices and the total of what you see is something like 1100 vertices.

And many thanks for the variant tutorial. It cleared up many questions and eased my mind.

by decaff_42
Been working on a few paints, but now homework and take-home exams are going to rule my weekend. I'm looking to do a few more airlines and then compile a release. As I've looked through the images online I'm surprised how many more Rolls Royce Engines there are on the 757 fleets. From what I've seen it's something like 5:1 Rolls vs Pratt.

Here's a couple examples of what I've got.

by decaff_42
Well, I got my homework done and started my exam. (The exam seems straight forward enough, so I hope to get it done before Sunday.

In the mean time, here's some US Airways Paints I did.

In order to expand and improve my decal pack I have begun to include the fonts that can be used for various decals (like the boeing number font) or the Star Alliance approximation font (which was 100% free from google) I had to make a new decal for this aircraft because the text was extremely skinny.

I have also added in the YSPaint Kit fonts because those are really useful. I also found that there is a master key for the old airlines font, which I included.

Another thing that I am going to add for all decals that I will make in the future is an srf with a few faces painted the different colors that the airline uses. Sometimes you can find marketing information which gives exact colors, so I figure I would include that information.

So I spent most of the daylight hours working on my exam and I'm proud to say after 16 pages of math, it's done!

The professor wanted a super-neat final draft, so my messy handwriting had to be re-trained.

by Blackhawk11223344
The U.S Air one! Dang, I seen that and in my mind I was saying "Must Have!! Blackhawk Want!!" So excited to see what all you have in store for this. Beautiful work. I wish I was this good

. I must be completely honest and say these look like models for FSX!!!

by decaff_42
Well I hope you enjoy them!

Pack has 22 aircraft from 8 airlines!

Well, It has been a while since I posted anything here. Been slowly working on some things behind the scenes while completing exams and homeworks. (BTW, I discovered the extreme annoyances associated with a TA losing half my exam...Saw online that my grade was a 47 and I was like WTF. Had to re-take the section that was lost but in the end, I got a 89.)


Can anyone guess what aircraft this is from? 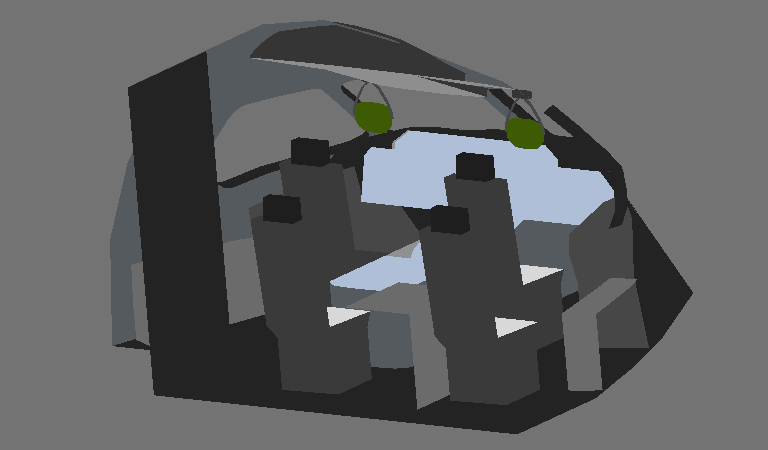 by Turbofan
Either the 787 or the 350, with those side windows it's kind of hard to tell exactly which one (they both have similar window styles).

This is the 787! I am working on it and looking for a good top-down (real life) photo of the wing. The 3-views that I've seen have the wrong flap setups, so I'd like to get a reference that has them correct!

by Turbofan
Ahh yes, I forgot Airbus stuck to the six-window layout. Good call decaff! I'll see if I can find some reference videos/photos for you. It's interesting that the 787 has single-slotted flaps both inboard and outboard whereas all other Boeing heavies have had the double-slotted inboard and single-slotted outboard flap systems. So far I have found some media that may help you.

All Nippon 787landing at HND - Kind of a long video, the good stuff starts at around 5 minutes into the video. You'll see how the flaps work, and the inboard aileron is actually a split aileron, the lower part moves much more than the upper part, which is actually hinged to the wing and moves a bit slower.

Norwegian 787 landing shot - this shows the flaps from the front as the plane's landing. Not sure how helpful this shot will be but I thought it couldn't hurt.

I also found this discussion of the 787 flap deployment quite interesting. It appears the flaps are simple hinged (a bit offset on the hinges) rather than pure Fowler flaps, that first move backwards and then start drooping down.
All times are UTC
Page 28 of 57