So I've recently found my old YSFolder after what feels like forever!

With it, I've managed to scrape my old projects folder up and blow some dust off the cover. What does this mean? It means I've downloaded blender again and have gone back into modding to finish all these old projects off!

I'll update this topic semi-regularly so keep in touch!

So my first project I want to finish off is the experimental USAF design "Manta" that I helped make around 2008-2009.

The Manta is a USAF concept aircraft that has never gone past concept art. It is a large transport craft, capable of flying in low along the sea to show a lower visual profile.
With stealth paint and the ability to fly low this aircraft also has a fairly low radar signature for an aircraft for it's size.

The ability to fly at very low altitudes is granted to the Manta thanks to the WIG or Wing In Ground effect which is an event that occurs whenever aircraft fly low to the ground.
The effect results in a high air pressure underneath the aircraft, creating a cushion of air under the aircraft an allowing it to fly safely above surfaces like water effortlessly.

The USAF envisioned the Manta as an invasion aircraft, a vehicle that would leave docks in the USA, fly across the ocean and then land upon beaches of enemy nations.
The aircraft was also imagined as acting as more than a transport vehicle; with it's high amount of fuel and helipad it is capable as serving as a portable airbase for helicopters
and with it's large cockpit it could also act as a mobile command centre, relaying information and orders to aircraft and troops.

The Manta is a unique aircraft, it has an extremely slow take off speed, it has a fairly unique spoiler system and further more it has fairly rediculous maneuverabilty.
These features are quite plainly made to happen at low altitude, the large control surfaces and thrust vectoring allow the aircraft to have a great post-stall maneuverability
and the fast pitch rate only meaning to happen at low altitude where the pressure builds up and the release of pressure via the control surfaces allows such abilities.


So both myself and Dragon029 designed and built this aircraft for YS to the stage of .dat and flight testing. My lack of knowledge at the time stopped us from making a polished product and blender wasn't reliable enough to finish the aircraft. After showing some shots of it flying on Discord today, I thought I might try and finish it off completely and maybe make a few variants... Who knows yet First job will be to clean the mesh up and then fit it out.

Getting that mesh all clean and tidy. 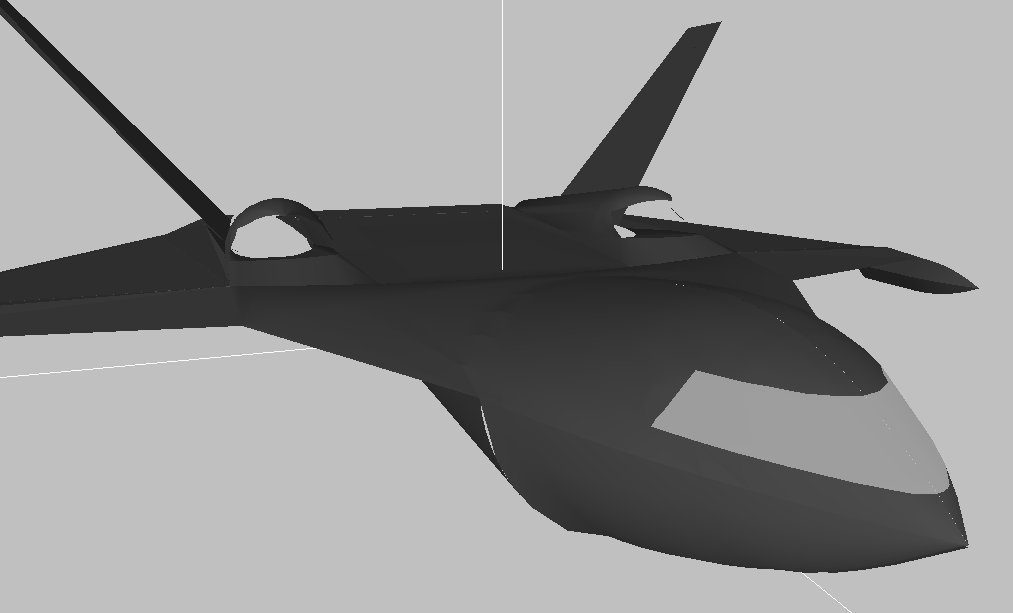