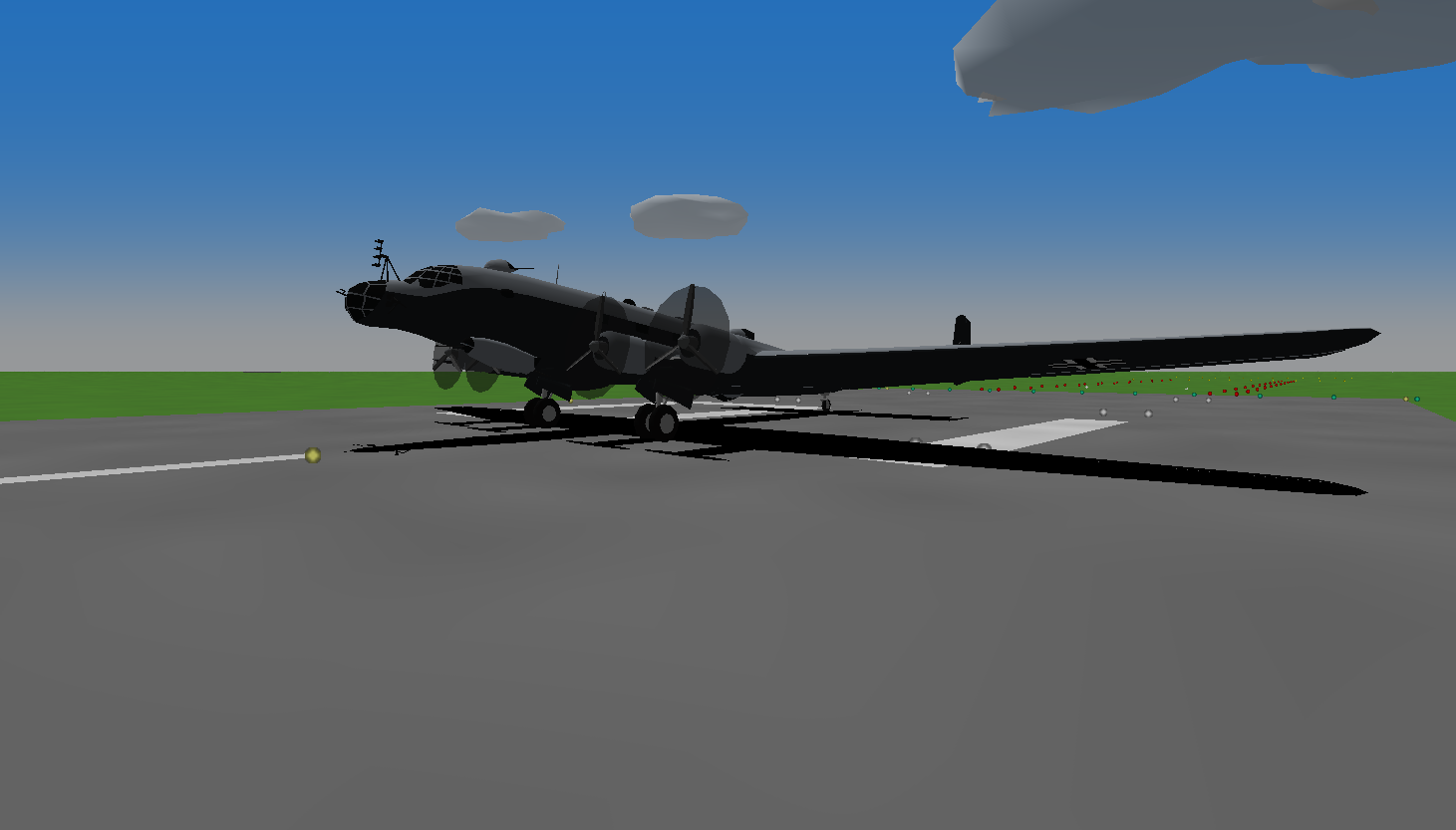 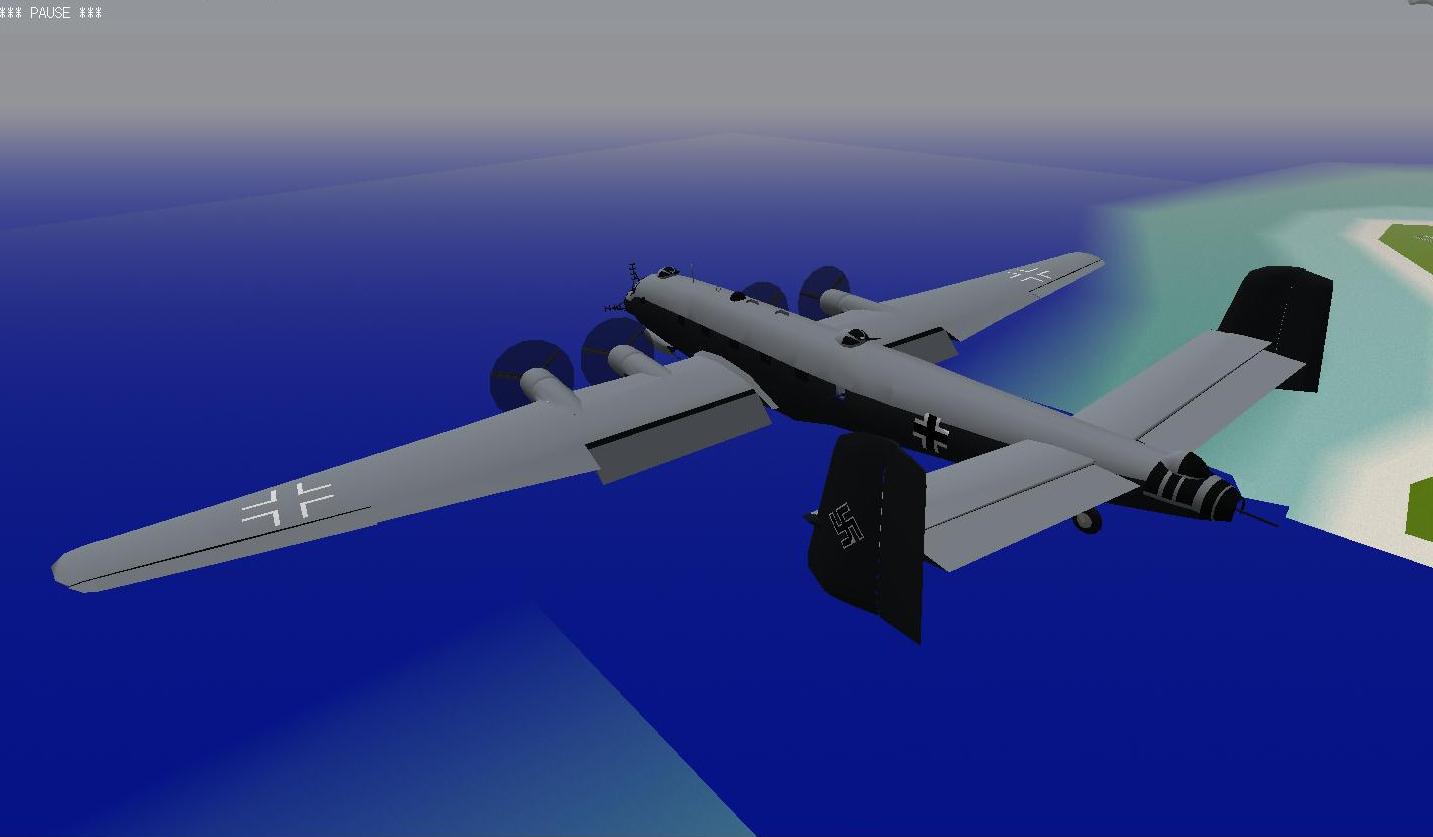 My first addon for YS! here is the Ju-290 A-7 i've been working on. I think the version i made was supposed to be a "Spy" plane based on information from a revell scale model i found. The markings are from the Ju-52 of the OCP, so credit to them where it's due.

I just want to say it has been amazing to watch you scratch model this aircraft. It looks amazing.
Check out my website YSDecaff for all my tutorials and addon releases.
Visit by Bitbucket page for Python codes: https://bitbucket.org/decaff42/

I'd like to put forward some suggestions towards the improvement of this beautiful Junkers while also hoping they will help you in making future aircraft:

1. Test your model before packing and publishing it. It is impossible to takeoff and land this plane without tailstrike. Ysflight calls out tailstrike if any part of aircraft collision models touches the ground/terrain/deck of the carrier type ground object before wheels. Your collision model is not aligned with the dynamodel and is protruding below wheel position. I made collision surf visible in .dnm to illustrate the point:

2. I'm passing what I've learnt from Taskforce58 since the first version of my first sratchbuilt aeroplane, A320, had the same mistake; since all rotational movements are made around it, the center of the aeroplane's visual model (0,0,0) should be near the real aeroplane's CG, somewhere near the fuselage center so the angular movements (especially roll) look realistic. This one is set too low (at the intersection of the axes):

3. While YSflight does not provide realistic flight model, dat file can be tweaked to make the model playable. Let's start with the power:

OK, it doesnt have PROPEFCY, usually set around 0.7 - 0-9, so all of the 1700HP are turned to thrust but 1700HP is the output of the single BMW 801 engine and Ju-290 has four of them. Therefore properly it should have been PROPELLR 6800HP. With 1700HP aeroplane is severely underpowered. What makes things worse:

Now this is important for taildraggers as it marks the speed when the tail can be risen and takeoff continued in flat, less draggy attitude. First time I tried to take-off, I thought "Mein Gott! This thing is not going to fly!" Eventually I was proven wrong but i used better part of Zagreb's 3250m runway. (To digress a bit; Zagreb Pleso /LDZA / ZAG started its life as 2000m concrete strip, built by Luftwaffe in WW2 as refueling stopover for transport flights to Greece.) Now airborne, things got pretty interesting as aeroplane was not keen to attain any reasonable flying speed, partly due to lack of power, partly due to cruising conditions set to too high altitude (for unpressurized aeroplane) , too high power and too low speed. 240 kt with 0.85 thrust at 10000ft would do the model more justice. Aeroplane handles very nicely so after a bit of low level work, mid and high altitudes been unattainable from runway start, it was time to go home. First problem is that YSflight determines drag from cruise conditions and if you set your thrust/power in dat file too low, it will calculate that the airframe is very slippery so it took a couple 4G 3-60 turns too bring speed to low enough for landing. Ok, this can be fixed by changing to more realistic power. However, here is the next trap:

70 kt is too low for such a heavy aeroplane and too dangerously close to MANESPD1. If you go below minimum manuevering speed on the aeroplane that has no post-stall maneuverability enabled, you will go where the gravity and thrust vector take you with no control over the aeroplane whatsoever, until you again go above it (perchance in stall) or you hit something solid. REFLNRWY determines brake power and using 900m from 70kt gives you too weak brakes even for comfortable taxiing.

This will become an issue when the collision model is made properly. Way the YSF determines collision between flying and ground objects is measuring the distance between centers of the objects and when it goes below their htradii added, it starts checking if collisions surfs are interfering with each other. Therefore optimal HTRADIUS is such that just covers every point of the coll model, so no part is left out, and it's not excessive so collision detection routine is not invoked unnecessarily. With Ju-290 having wingspan of 42 m, 13m is way too low. About 23 would be more like it.

4. this one is really minor: there are openings in the nose and fuselage for the gunners and one can see through aeroplane at these position. No need to do the model of the inside, just a boxes around guns, made of couple polygons would do.

Hope this helps and I'm looking forward to see more models from you.
Top

Now this is important for taildraggers as it marks the speed when the tail can be risen and takeoff continued in flat, less draggy attitude.

Maybe you can help me fix the DAT for my GAC XF5U-1 Pancake. I feel as the plane is too slow and that the tail rises up way too fast and looks like it's about to flip forward.