The front gear (whelgear) is 2.321 meters higher than the rear gear. Try making them:

Well, I've been working on this little mesh from Skyline, as shown earlier.

Still have a few things to work on, but it feels like it's 95% there.

Working on an interesting paint scheme i saw.
Check out my website YSDecaff for all my tutorials and addon releases.
Visit by Bitbucket page for Python codes: https://bitbucket.org/decaff42/

Now that is an awesome piece of work.
Hi! I make average, undesirable, boring grey maps for YS Flight!

Great painting on the Oman Air 737 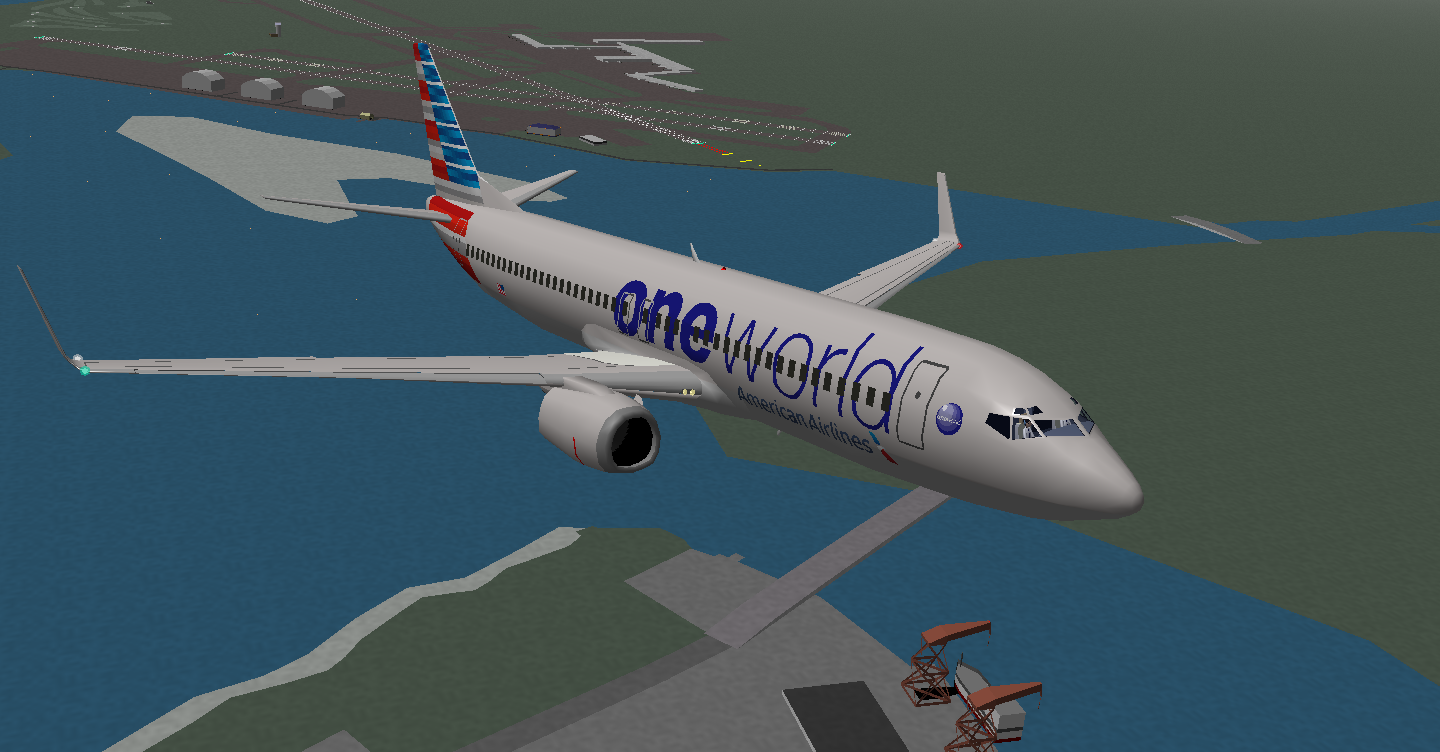 I am enjoying working on detailed paints. Rather than try to go for a balance of quantity and quality of paints by picking simpler paint schemes, going for extreme detail is rather exciting and enjoyable. 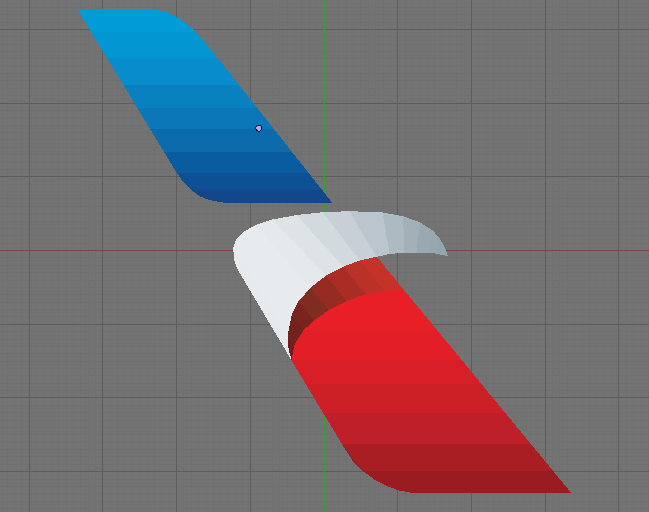 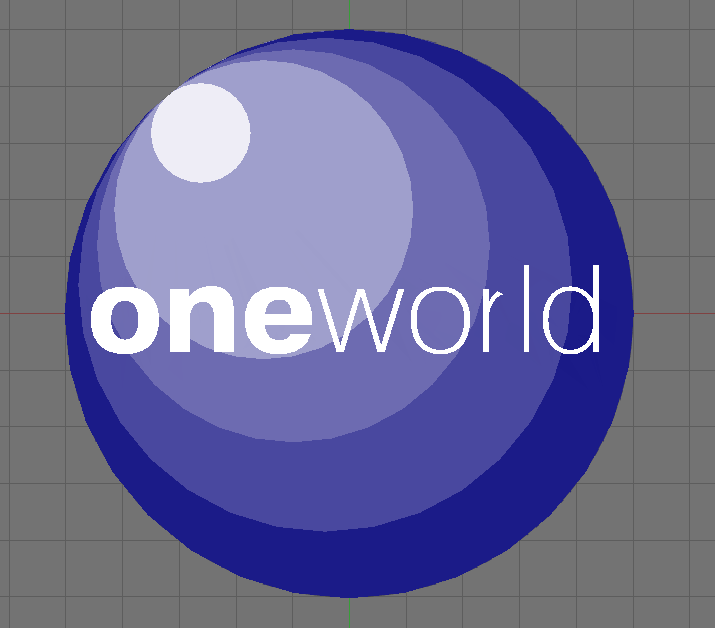 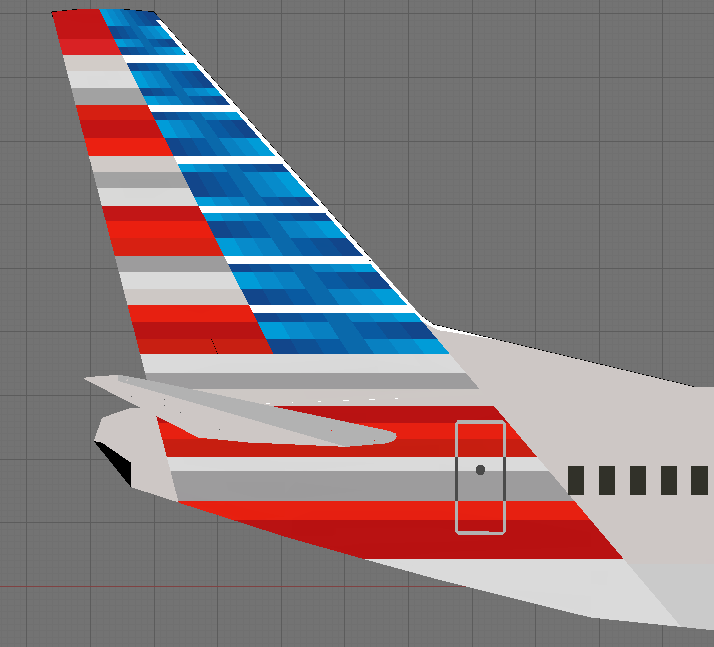 Wow, really nice work!
I don't know who you are. I don't know what you want. If you are looking for my signature, I can tell you I don't have one. But what I do have are a very particular lack of skills, skills I have imagined having over a very long career. Skills that make me are completely useless in any situation. If you stop reading now, that'll be the end of it. I will not look for you, I will not pursue you. But if you don't stop reading, I will look for you, I will probably not find you, and I will kill your refrigerator.
Top

I should get this flying by the end of today.... 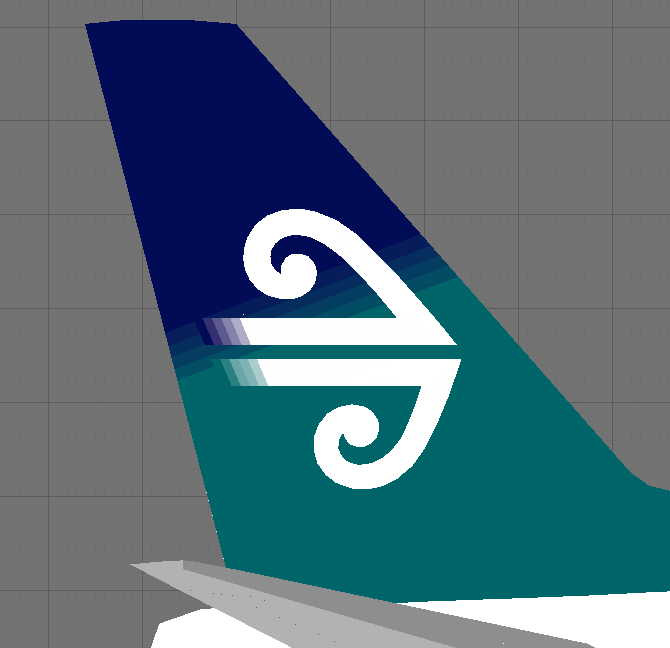 Using This Website Makes the gradients easier to get right or decently close to correct.

Saw this livery in the cool paint schemes topic and thought it was a shame it wasn't made for YSFlight yet. The tail, while looking simple, was actually 80% of all the work going into this mod. A lot of sniping and shrink wrapping the mesh to conform around all four parts of the vertical tail.

UPDATE TIME!
First the Velocity is currently on hold while Skyline passes along some information about how his airplane is configured inside.

SECOND:
Okay...I guess I'm kinda drawn to the boeing aircraft and I got inspired the other day when I was flying the C-32 on the CivAv server with a whole bunch of other people.

I originally found this model on the sketchup warehouse and when I downloaded it, there were 198,000 face. To put that into perspective, that is the equivalent to 6 707 models. It turns out that every seat in the aircraft was included, and the engines had an insane amount of detail: 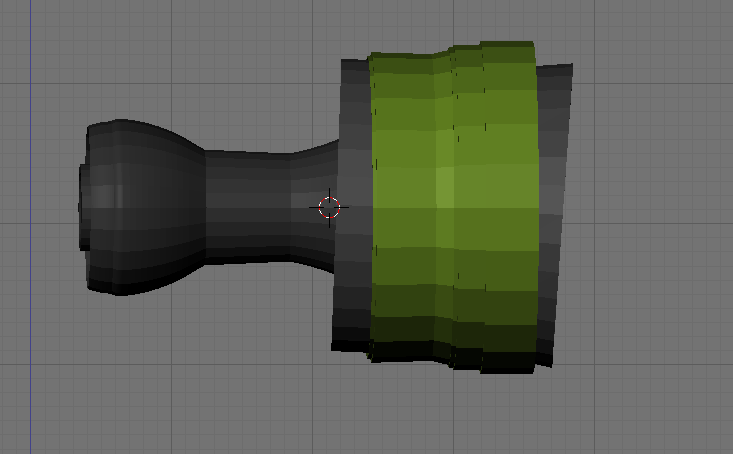 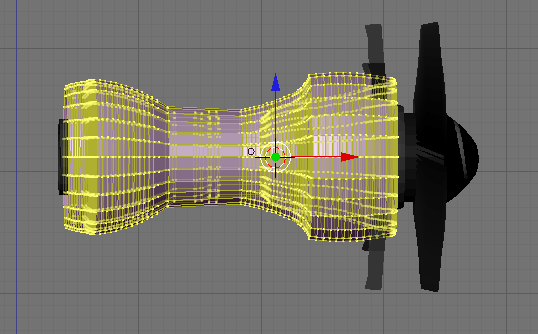 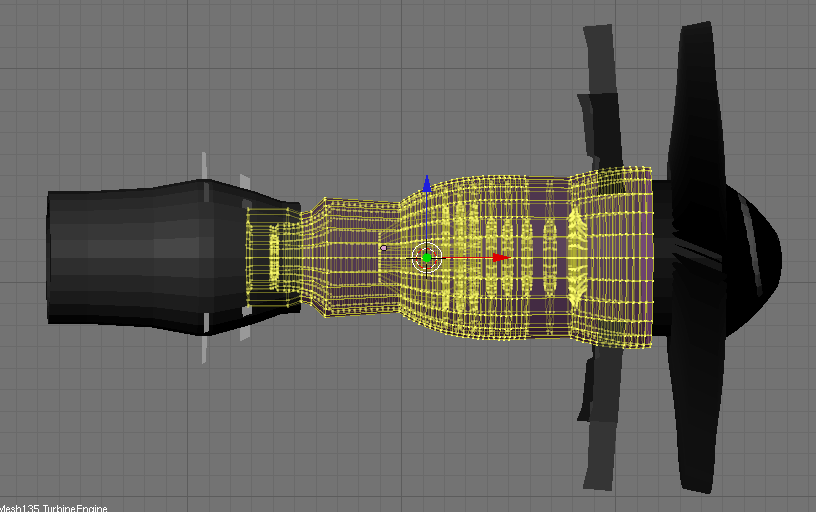 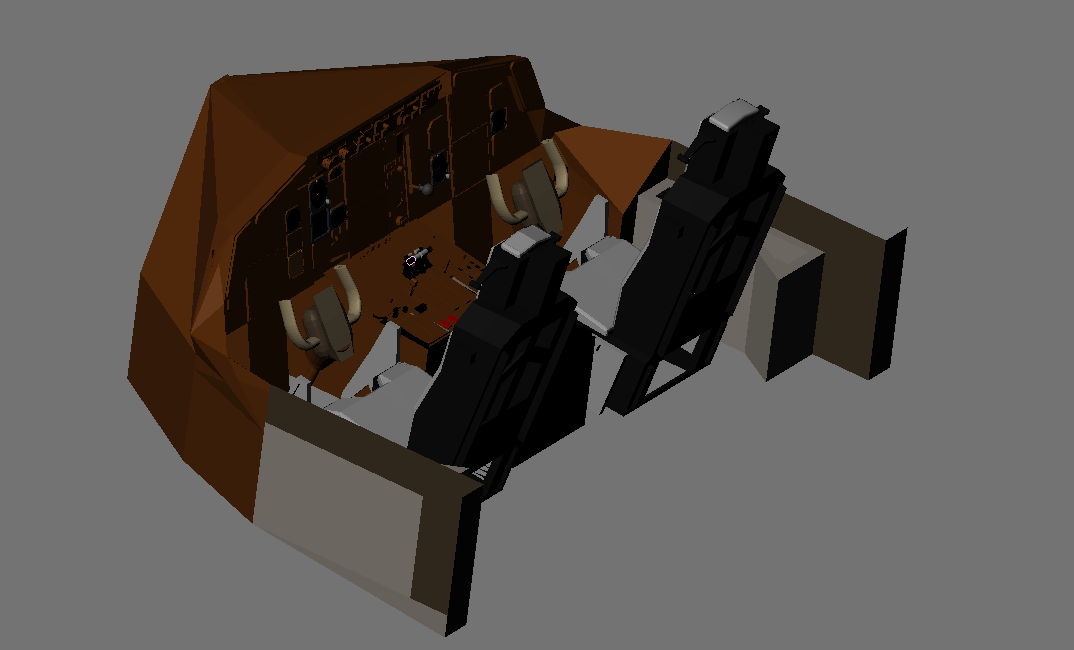 What I've Done So Far: What I'm planning on Doing Next Once all the mesh work is done, I can go and animate it and then paint it!

Got some more work done!

I was able to get the flaps, and landing gear was fixed, updated, and integrated with the new wing.

Here's a look at the wireframe of the flaps. The 757 has a double-slotted flap which is very similar to the outer two flaps on the 727. I think I still have to add a flap mover for the inboard flaps, but I'm not sure at the moment. It's hard to find pictures. If you guys can find a shot of the flaps from the front inboard of the engine, that would help me a ton! 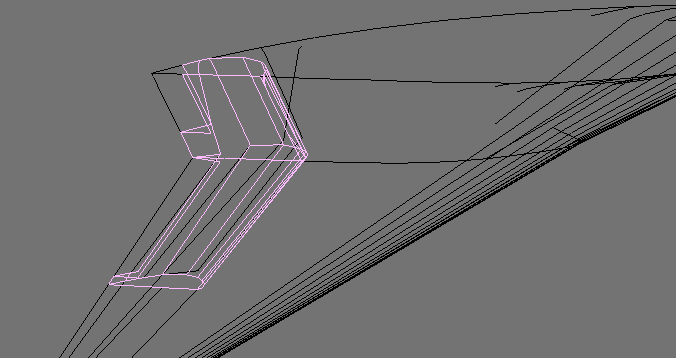 Getting some color on the aircraft so I can tell the different parts apart. For the most part, the engine (inside parts) and landing gear won't change colors from what I have here. I was also able to add in a thin strip for the glowing of the engine. I will have to see how well this looks in flight tests in order to determine if I want to keep it or not.

Video of trailing edge flaps going from fully retracted to fully deployed (flap movement starts at roughly 41 seconds into the video). You'll note the inboard flap canoe is situated outside the lower "slot" of the inboard flaps, such that the lower slot "rides" along the edge of the canoe, not on top of it. Also note that there is no inboard aileron on the 757. I tried looking for the view from the front when the flaps are extended/retracted but found a gear movement video from that angle instead. I'll keep looking though. By the way I'm not sure if it's just the way it looks in that Sketchup model perspective but the wings look a bit short to me (maybe it's just me). Hopefully this will help you out some.
Hi! I make average, undesirable, boring grey maps for YS Flight!

Thanks for the info! I got the majority of the external animations done 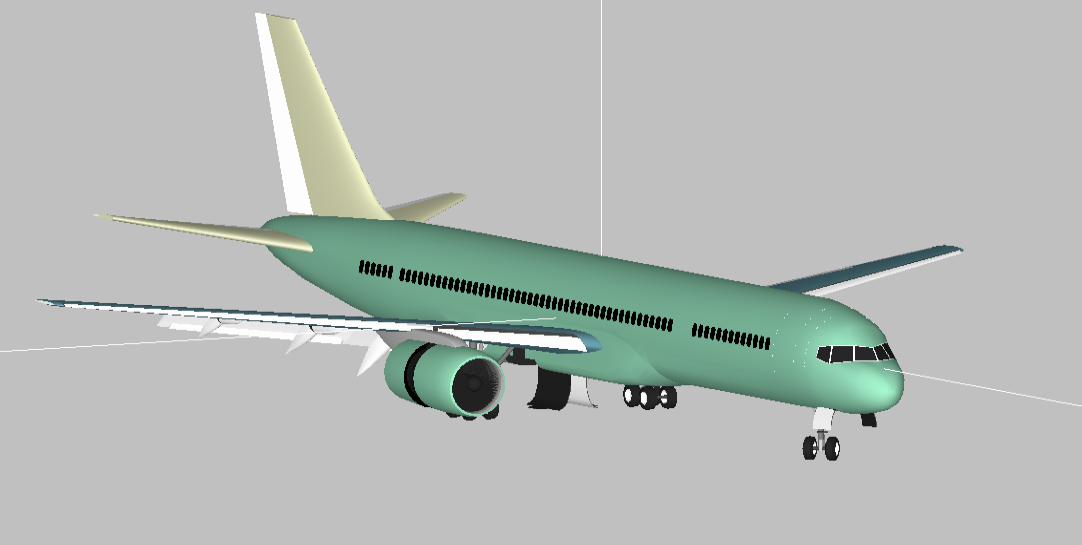 What you see here is ~10,000 faces. Overall, I would say that this has a detail level around Takety's 737s. I am really, really lucky that the original model from Google Sketchup was well-made in the first place.

The last big thing I have to do before I can work on a dat file is to get cockpit made up and reduce it from 30,000 faces...

^Great! Glad I could help. It's looking good too. If you can, try and reduce the length of that inboard flap track fairing to match that of the two outboard fairings (no big deal if you can't though).
Hi! I make average, undesirable, boring grey maps for YS Flight!

Smexy! Can't wait to start flying this around..
Top

Oh boy, she's one of my favorites, flown on her lots of times! Be nice to see a high detailed one in YS!

Here's an update on the 757 cockpit. I've taken many components from the 737 cockpit, but overall, reduced the number of faces to try and streamline this. As this stands, I am ~90% done. 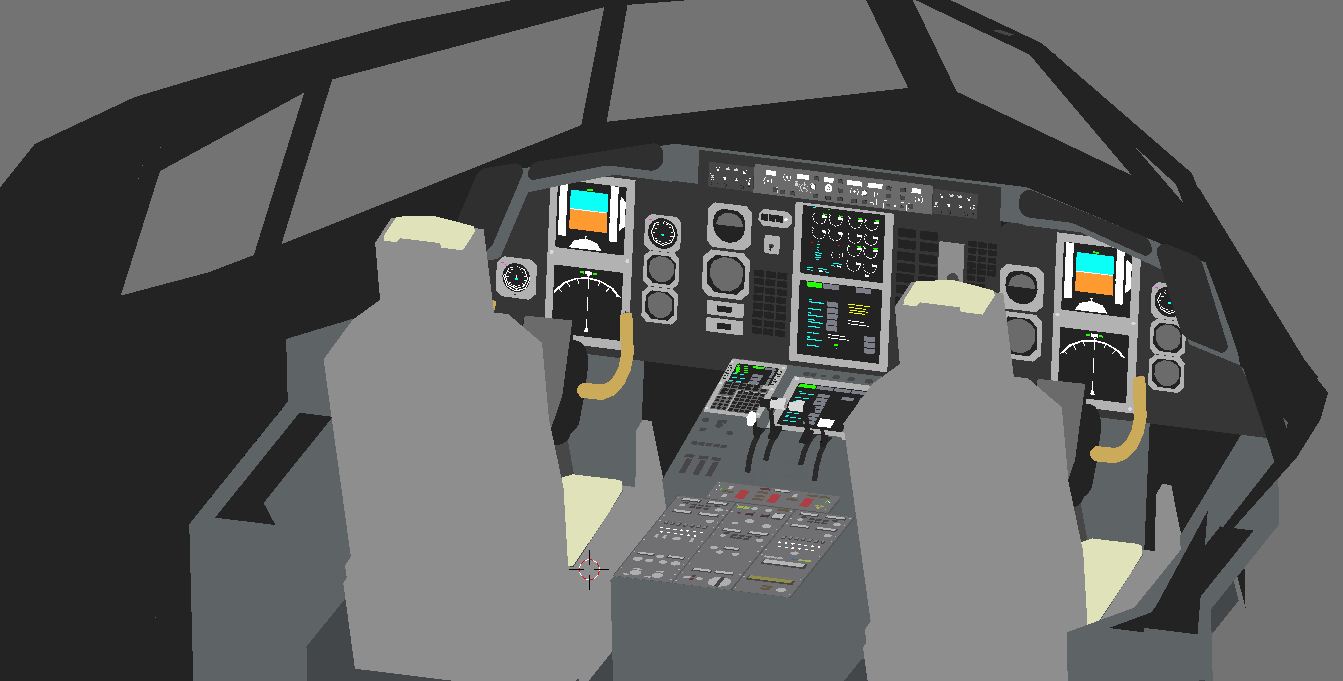 Here's a WIP shot of the 757-300. I still have to do some work with the windows, but the blanks are just about done!

As you may be able to see in this picture, I have added some minor panel lines on the upper surface of the wing, and also added the escape route for the over-wing hatches.

I still have to get them all flying, but I hope it won't take too much longer. I just have to adjust the cockpit SRF file to sit in the right spot for the -300s, and then extend the coarse SRF file.

* w denotes the presence of winglets.
Check out my website YSDecaff for all my tutorials and addon releases.
Visit by Bitbucket page for Python codes: https://bitbucket.org/decaff42/

Looking great decaff. Just a little thing since you're working hard on this plane - the nose might need a little modification, in it's current state off of Sketchup it looks a little rounded than it actually is. If you look at this photo you'll see it's a bit more pointed and longer. No biggy but I thought I would point that out. Looking forward to getting this in the air

@VNAF, I wasn't originally planning on doing those right out of the gate, similar to the KC-135 A/E and KC-135R packs I did, but As I look through the photos of neat paint schemes, I'm seeing a lot of the PW engines!

My thought is that I would make the PWs and then simply swap them in. The blank aircraft would be engine-less, so that way you would simply import the engine selection you want and you would be good to go.

That being said, I'm having a horrible time finding technical drawings or 3-views of the PW engines. I'm going to look through google sketchup, but that might be more work to refurbish one of those than to simple scratch make something that looks about right.

I have updated the noses of all the aircraft per Turbofan's observation, and also fixed the window issue I mentioned in one of my previous posts.

@Turbofan,
When I went back into the model to look at the nose I found that the upper surface of the nose seemed to have too broad of a shoulder, so I slimmed it down a bunch which smoothed out the shading on the nose to something more reasonable. Thanks for the tip!
Check out my website YSDecaff for all my tutorials and addon releases.
Visit by Bitbucket page for Python codes: https://bitbucket.org/decaff42/